Grimshaw masterplanned expansion which was due to be built by 2028 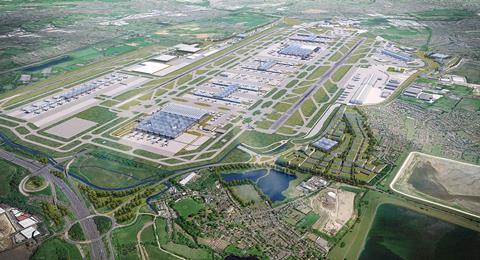 Heathrow’s plans to build a third runway have been ruled illegal by the Court of Appeal because ministers did not sufficiently consider the government’s climate change commitments.

The government responded by saying it would not challenge the decision in the Supreme Court.

Transport secretary Grant Shapps tweeted: "Airport expansion is core to boosting global connectivity. We also take seriously our commitment to the environment. This Govt won't appeal today's judgement given our manifesto makes clear any #Heathrow expansion will be industry led."

Until today's decision the £14bn third runway was expected to be built by 2028.

Grimshaw was appointed to masterplan the airport’s expansion in July 2016 and has been working on the project ever since as concept architect within the integrated design team. It did not immediately respond to a request for a comment. In an interview with Buiding Design last year incoming chairman Andrew Whalley said he wanted the practice to become the first to design only net-zero-carbon buildings. The practice has taken some stick for designing an airport, with partner Jolyon Brewis claiming in 2018 it would "set new benchmarks for innovation and sustainability in airports".

After the news broke this morning, architects weighed in on Twitter, with one writing: "Good news on the third runway. Government now forced to explicitly contradict its own (supposed) climate aims to get this through."

#Heathrow expansion defeat a watershed in terms of environmental muscle - but to address the climate crisis we need to build national #infrastructure - so this must not become a resort for all objectors to everything.

Johnson, who was foreign secretary and in Afghanistan at the time MPs voted to approve the £14bn scheme 18 months ago, was heavily criticised for not being in the House of Commons to voice his opinion.

The prime minister, whose constituency Uxbridge and South Ruislip is under the Heathrow flight path, had previously said: “I will lie down in front of those bulldozers and stop the construction of that third runway”. In order to have voted against the government he would have had to resign.

An alternative to appealing the Court of Appeal's decision would be for the government to draw up a new policy document in order to approve the runway.

While the government has not indicated it will appeal the ruling, Heathrow has said it will do so, according to Sky."We will appeal to the Supreme Court on this one issue and are confident we will be successful," said a statement from the airport.

Only winners from a refusal to expand Heathrow as agreed by Parliament 2 years ago will be other international hubs that will take the extra traffic, esp Amsterdam, Paris & Dubai

There won’t be fewer flights, they just won’t come to Britain. We will be poorer, they richer

The court’s ruling is the first in the world to be based on the Paris Agreement and may trigger challenges against other major infrastructure projects in the UK and abroad.

In its ruling the court stressed that it had not decided whether or not Heathrow’s expansion should go ahead but merely ruled that the Airports National Policy Statement (ANPS), which approved the project in its current form was unlawful.

It said that failure to consider the Paris Agreement had been "legally fatal" to the ANPS.

The ruling said: "We have not decided, and could not decide, that there will be no third runway at Heathrow. We have not found that a national policy statement supporting this project is necessarily incompatible with the United Kingdom’s commitment to reducing carbon emissions and mitigating climate change under the Paris Agreement, or with any other policy the government may adopt or international obligation it may undertake.

"The consequence of our decision is that the government will now have the opportunity to reconsider the ANPS in accordance with the clear statutory requirements that parliament has imposed."

BREAKING: We won! Today we blocked the Tory government plans to build a third runway at Heathrow Airport.

Today’s judgment is a major victory for all Londoners who are passionate about tackling the climate emergency and cleaning up our air. https://t.co/59MEn2X6Lw

The challenges were previously dismissed in the High Court in May last year but the complainants took their cases to the Court of Appeal.

Environmental group Friends of the Earth, represented by law firm Leigh Day, brought one of the legal challenges, focusing on the climate change impact of a third runway.

The group argued that the government’s decision to allow expansion was unlawful as it failed to explain how it fitted in with the UK’s climate change policy.

It also claimed that the decision breached the Department for Transport’s sustainable development duties in failing to consider mitigating climate change for future generations.