A new regeneration company has been set up to build out 3,500 homes across the south coast towns of Bournemouth, Christchurch and Poole.

The FuturePlaces urban regeneration company has been created by the newly formed unitary council covering the neighbouring towns, and is to be headed up by a key advisor to the government’s Building Better, Building Beautiful Commission, and delivered in line with the “stewardship” model advocated in the Commission’s report.

The Bournemouth Christchurch and Poole (BCP) council said the regeneration company will build out a portfolio of 14 sites with a gross development value in excess of £2.8bn, with the ambition to help deliver the council’s “Big Plan” for the authority.

A council report published last month said FuturePlaces had been tasked with driving the regeneration of sites capable of delivering around 3,500 homes. 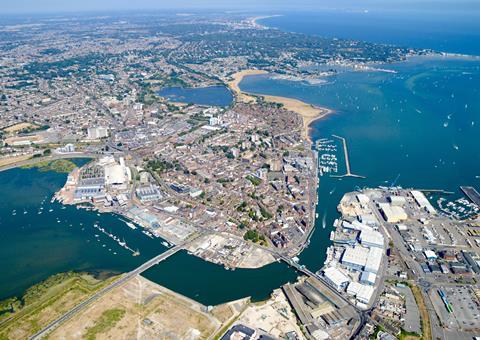 Key sites include the Holes Bay scheme in Poole Harbour (pictured), which BCP says is the the south west’s largest brownfield regeneration site, with capacity for around 830 homes. Other sites include the Wessex Fields Medtech Park, and the existing Bournemouth International Centre, which is in line to be replaced.

In an official report to the council last month officers said a review by the Stewardship Initiative of “high-quality, residentially led urban development” schemes showed they demanded “long-term landowner involvement, and of a patient approach to financial returns”. The council said the body “plans to pursue an approach to regeneration based on principles of stewardship” and last month allocated £8m for the set up and initial running costs of the vehicle.

Gail Mayhew, FuturePlaces MD and one of the Building Better, Building Beautiful commissioners, said she aimed to use the vehicle to “create places with liveability and quality at the fore.”

She said: “By engaging stakeholders with a longer-term interest in a place, and by funding infrastructure and placemaking with longer term patient capital, we can secure better outcomes for places and people. Ultimately the aim is to shift the emphasis from value extraction in the short term, to value creation – economic, social, and environmental – over the long term.”