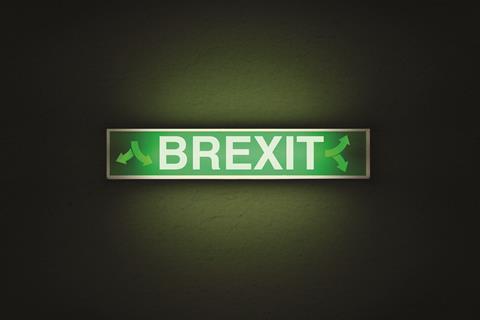 RIBA’s president and chief executive both issued stark warnings today over the damage Brexit chaos is wreaking on the profession.

On the day the UK was originally due to leave the EU, Ben Derbyshire said there were already signs European clients were trying to steer clear of British architects.

He pointed to Ojeu notices warning British candidates that they might be rejected from the procurement procedure.

Tender documents for Project Loi 130, a new 24,000sq m office complex – albeit for an EU institution, the Office for Infrastructure and Logistics – in Brussels’ European Quarter, said: “For British candidates: Please be aware that after the UK’s withdrawal from the EU, the rules of access to EU procurement procedures of economic operators established in third countries will apply to candidates or tenderers in the UK depending on the outcome of the negotiations. In case such access is not provided by legal provisions in force candidates or tenderers from the UK could be rejected from the procurement procedure.”

An extract from the Ojeu notice for Project Loi 130, a two-building office complex in Brussels

Derbyshire told BD: “Ojeu notices are already giving clear and explicit indications that British practices won’t be considered because of the risk of them not being eligible after Brexit.”

But more damaging still, he said, was the effect of the uncertainty surrounding the outcome of the Brexit negotiations.

“Our position is very clear: that no deal would be a disaster for the industry and as a consequence a disaster for delivery of key government policy, not the least of which is housing,” he said.

>> Also read: Bracing for Brexit: How prepared are architects?

“Most homes are built using materials and components that come from across the Channel. So tariffs or price increases would have a big impact.

“And the issue of confidence is definitely biting in terms of projects as Adrian Dobson’s latest report shows.”

The RIBA’s Future Trends report last week showed the market for architectural services was “shrinking quite significantly” and that workloads had fallen 6% in the last three months.

“We are concerned, and in particular about a no deal. It’s still a risk. We simply need to get back to a position where people can plan whatever the ultimate outcome. When industry, manufacturers, supply chain and design practices can’t predict the future it is incredibly unsettling for business.”

RIBA chief executive Alan Vallance issued a statement this morning saying: “For two years, we have been told that on this day we would leave the European Union. After a week of political paralysis, we are still unclear when Brexit will happen and on what terms.

“It was right to seek an extension of Article 50 – no deal is no option. Continuous uncertainty and the threat of crashing out of the EU without a deal is damaging for all sectors including architecture.

“We need politicians to get on and sort out this mess, and then focus on key issues, such as tackling the housing crisis, to dramatically improve our communities.”