Louvre pyramid architect 'an inspiration and a true master' 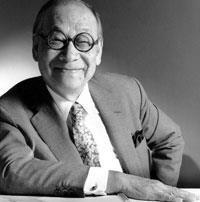 Norman Foster has paid tribute to IM Pei, who has died aged 102 at his home in Manhattan.

He described Pei as "an inspiration and a true master".

Pei, who Foster described as leaving behind a "formidable legacy", designed more than 170 projects including the Louvre pyramid, the Museum of Islamic Art in Qatar, the Oare Pavilion in Wiltshire - his only UK project - and the Suzhou Museum in China.

I received news of IM Pei’s passing yesterday with great sadness. For me, he was an inspiration and a true master of monumental modernism. He was deeply influenced by the great architects of the early 20th century – particularly Gropius and Breuer with whom he worked closely as a student at Harvard – going on to create a powerful body of work himself that has shaped contemporary practice in a major way.

He created uncompromisingly modern designs such as the Kennedy Library, the National Gallery East in Washington, and the Bank of China Tower in Hong Kong, but was sensitive to tradition and the value of the vernacular. He drew on concepts developed by Chinese landscape architecture, reflecting a deep appreciation of the importance of the spaces between buildings. The integration of nature and landscape into his designs is a theme that runs through much of his work, from early projects such as The Mesa Laboratory of the National Center for Atmospheric Research in Colorado right through to his later work at the Miho Museum in Japan which was literally built into the landscape.

Pei’s standing in the profession is assured – he won every major accolade there is – but in the public mind he will always be intimately associated with his sensitive yet bold extension to the Louvre in Paris. A startling and brilliantly simple and elegant intervention, its transparent entrance is respectful of existing structures, yet simultaneously eye catching. It has clearly stood the test of time to become one of Paris’s most cherished icons. Entrusting a building so closely bound to the national psyche to a foreign architect was a far-sighted decision by the French government.

He is one of the “greats” and will surely be missed by us all. Yet, he leaves behind a formidable legacy that will continue to influence architects and designers for decades to come.