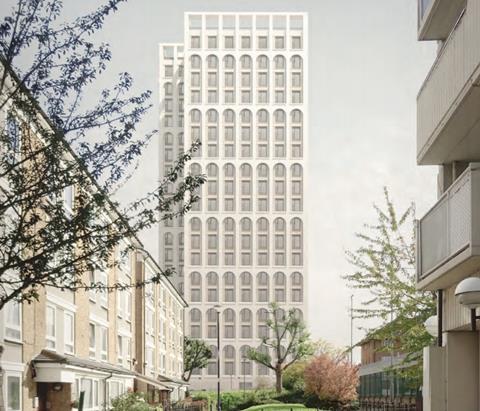 Housing minister Stuart Andrew has approved Henley Halebrown’s 20-storey residential tower in west London which had attracted opposition due to its height.

A planning inspector’s decision to grant approval to the 133-home Edith Summerskill House development in Hammersmith & Fulham has been upheld by Andrew, who felt the ‘outstanding design quality’ of the scheme outweighed the fact it is not in a location that ordinarily would be permitted to have a high building.

The planned development by HFS Developments, a joint venture between the Hammersmith & Fulham Council and Stanhope Developments, sits on the site of a previous 18-storey block demolished in 2017.

A planning inspector said: “The real genius of this building lies in the overlapping square arrangement of its footprint, its staggered volume, the classical proportions and elevational rhythm of its arched façades, and its inner and outer skins.

“It will make a slender and elegant contribution to the townscape. It will activate the frontages at ground floor level. It will improve the public realm. Its internal arrangements will create functional and sustainable homes of outstanding quality for its residents.”

The scheme has faced opposition from some residents and Chelsea and Fulham MP Greg Hands, who last year tweeted “We need more homes - but not more tower blocks - in Fulham” in response to previous housing secretary Robert Jenrick’s decision to call in the scheme.