RIBA president Alan Jones said tonight: “Today’s economic and employment forecasts make for stark reading. Medium-term support for individuals and businesses struggling with the impact of the pandemic and a long-term investment plan to keep the country building are essential. The government’s financial support packages have been, and continue to be, critical for our sector. It’s therefore reassuring to see the chancellor allocate significant sums of money to continue provisions.

”The National Infrastructure Strategy must also be welcomed as a long-overdue framework that should kick-start the development of sustainable transport links across the UK.

“While the chancellor’s comments on increasing ‘pride’ within neighbourhoods and the allocation of £7.1bn to roll out a national home-building plan might show some commitment to tackle our housing crisis, the funding fundamentally falls short of what’s required. Local authorities need adequate money and resource so they can deliver the council houses we need, and those currently facing huge fees for the remediation of flammable cladding need more than the £1bn already pledged.

”Finally, wherever the government spends money over the coming year, we urge the Treasury to undertake post-occupancy evaluation to ensure maximum value for money. To make the most of government funds and reach net zero by 2025, the government must understand how new buildings and infrastructure actually perform.”

The chancellor has unveiled a raft of measures intended to keep firms afloat in the coming years as the economy struggles to rebound from its largest contraction in more than three centuries thanks to the carnage caused by the covid-19 pandemic.

Stark economic forecasts published alongside the budget by the Office for Budget Responsibility revealed the economy will contract by 11.3% this year, the largest fall in output for more than 300 years, because of the pandemic. 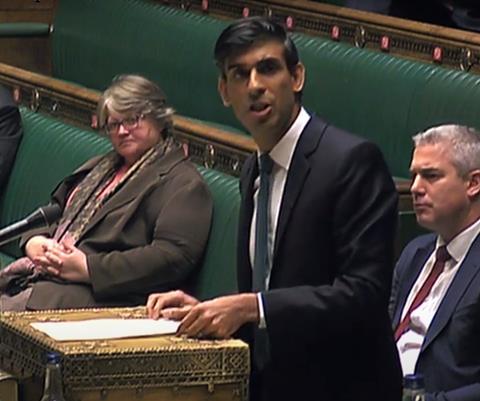 Total spending on tackling the virus has so far hit £280bn with a further £55bn to be shelled out next year.

Rishi Sunak said the “cost of inaction [over covid] would have been far higher” but warned the current level of borrowing was “clearly unsustainable”.

And he said the number of people set to be thrown out of work by by the pandemic would jump to 2.6 million by the middle of next year. The latest figure is 1.62 million, a rise of 300,000 on last year.

Output is not expected to return to pre-crisis levels until the fourth quarter of 2022, with growth projected to be 5.5% next year and 6.6% the year after.

Sunak (pictured delivering his statement to MPs this afternoon) said capital spending will total £100bn next year, £27bn more than in 2020 as he promised to continue funnelling government funds into the construction sector.

He announced a £7.1bn National Home Building fund which will run over four years and would see up to 860,000 homes built.

It will be on top of the £12.2bn affordable homes programme announced earlier this year and will include £4.8bn of capital grant funding for land remediation, infrastructure investment and land assembly, as well as £2.2bn of new loan finance to support housebuilders.

Spending rules for local authorities will be relaxed, allowing them to increase spending by up to 4.5%, while a new £4.4bn ‘levelling up’ fund was announced which local areas will be able to use to bankroll local projects.

The fund will be managed by the Treasury, the Department of Transport and MHCLG with Sunak promising it will take “a new holistic place based approach to the needs of local areas”.

Projects expected to be funded include new roads, upgrades to railway stations, improvements to high streets and town centres along with new libraries, museums and galleries.

But Sunak said that projects must be delivered within this parliament and be considered to “have a real impact…command[ing] local support” including the backing of local MPs.

He also announced the launch of a new UK Infrastructure Bank which will work with the private sector to finance major new investment projects across the UK.

The bank, which has been created partially to replace the European Investment Bank which the UK will leave at the end of the Brexit transition period on 31 December this year, will be based in the north of England and will open next spring.

The idea was suggested by chair of the National Infrastructure Commission John Armitt, who said it could start with base funding of £20bn.

Other measures include improvements to the way the apprenticeship system works for businesses and extensions to traineeships.