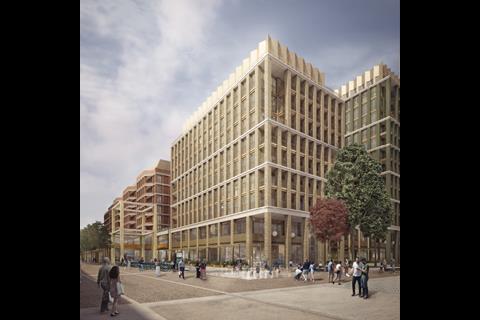 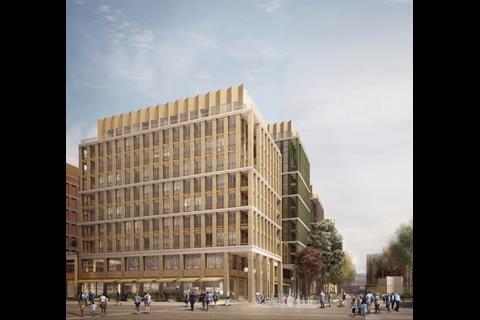 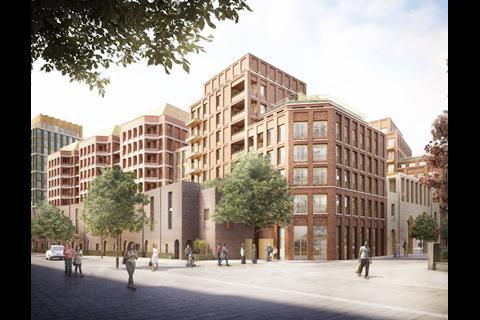 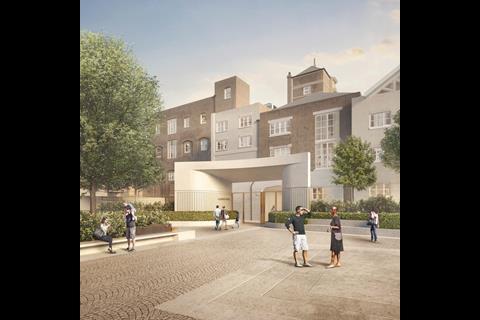 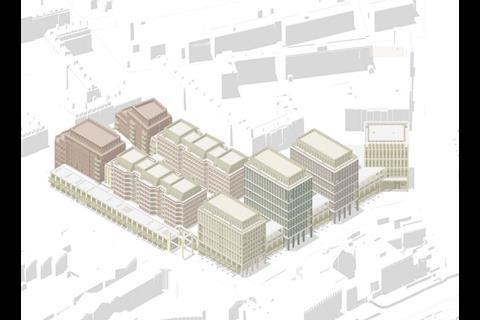 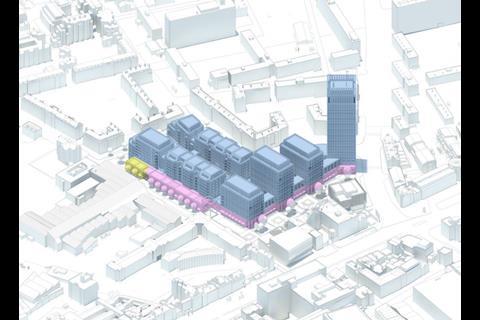 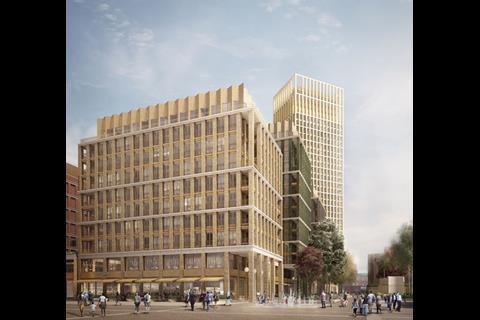 Part of Unit Architects' rejected plans to redevelop Sainsbury's Whitechapel branch with a 559-home development including a 28-storey tower. 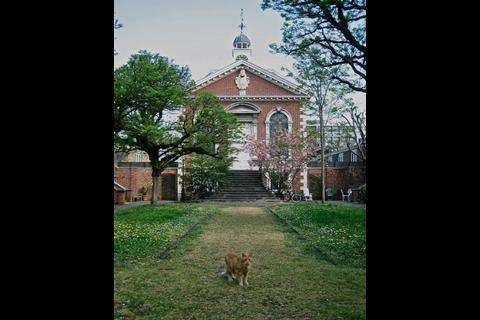 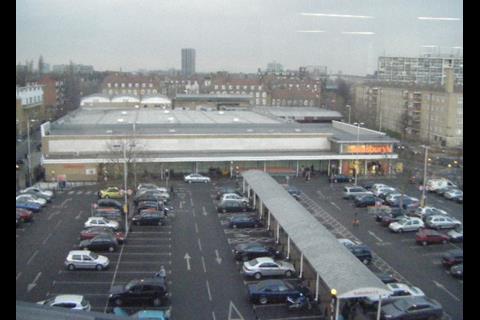 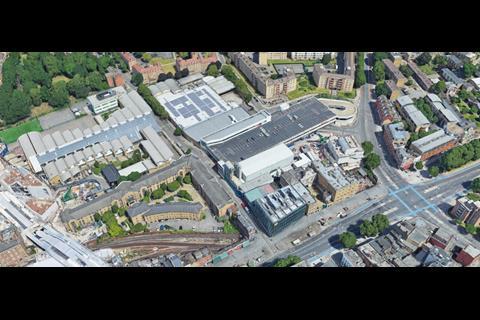 Overview of the Sainsbury's Whitechapel site. Swanley School is to the supermarket's left, Trinity Almshouses are to the far right

Housing secretary James Brokenshire has used his ministerial powers to refuse planning permission for the 471-home redevelopment of a supermarket site in east London – against the advice of his planning inspector.

The findings of a planning inquiry into Sainsbury’s proposals for its 3.1ha site at Whitechapel recommended Brokenshire to approve the scheme, drawn up by Unit Architects and carried forward by Ross Hutchinson’s successor practice Hutchinson & Partners. A model of part of the scheme is on show in the Architecture Room at this year’s Royal Academy Summer Exhibition.

But the housing secretary, in his just-published decision, said the scheme – which in addition to the homes would also have delivered a replacement supermarket, an energy centre and an educational facility – would have an unacceptable impact on light to existing homes and on neighbouring heritage buildings. 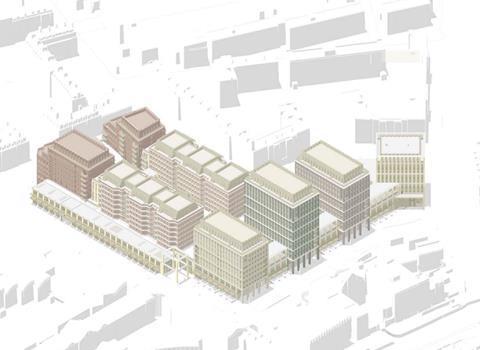 Unit Architects’ original proposals for the Sainsbury’s Whitechapel site included a 33-storey tower and would have delivered 559 new homes. The tower was subsequently reduced to 28 storeys but Tower Hamlets council rejected the scheme in 2017 for reasons that included the “substantial harm” it was expected to cause to the setting of the nearby Trinity Green Almshouses, which are grade I-listed.

A subsequent version of the eight-block scheme reduced the height of the tallest element to 14 storeys, and trimmed the number of homes. Sainsbury’s appealed Tower Hamlets’ non-determination of this application and planning inspector David Nicholson took evidence on it at an inquiry that ran from October 9-19 last year.

Overview of the Sainsbury’s Whitechapel site. Swanlea School is to the supermarket’s left, Trinity Almshouses are to the far right

In his report to Brokenshire, Nicholson said the public benefits of the scheme outweighed impacts on local heritage assets, but accepted that the scheme would result in an “appreciable reduction in daylight and some significant loss of sunlight” for neighbouring homes. He noted that a nearby secondary school would also lose daylight.

He said the development would provide a “more interesting and attractive outlook” for nearby homes than was currently the case, and that public realm improvements “should lift the quality of the environment as a whole”.

Nicholson noted that there was concern over light standards for new occupants of the 471 homes and that it was “likely that a number of future residents would experience less than ideal, if not poor, levels of sunlight and daylight” and that some of the homes would effectively be single aspect. 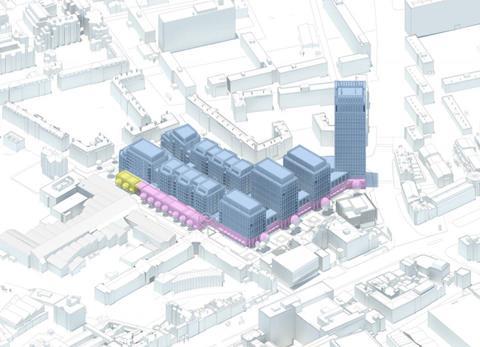 However he said that was not a reason for refusal and that the flats were in an “extremely accessible part of London with good amenity areas and new public realm”.

But Brokenshire, who established the Building Beautiful Commission, said the fact that many existing neighbours would experience “a gloomier outlook than they do at present”, and that a large number of windows would be affected, was a harmful impact that carried “substantial weight” against the application.

He said that while the scheme’s design and public-realm improvements tipped the balance in favour of approval, the heritage impacts and daylight issues put the proposals at odds with Tower Hamlets’ development plan and the government’s National Planning Policy Framework. 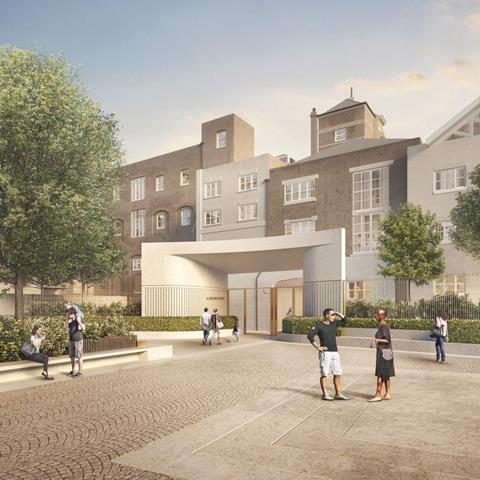 The Ministry of Housing, Communities and Local Government’s formal notification letter said Brokenshire had concluded that there were no material considerations that suggested the scheme shouldn’t be determined in line with Tower Hamlets’ development plan.

“He therefore concludes that the appeal should be dismissed and planning permission refused,” it said.

Sainsbury’s has the option of appealing Brokenshire’s decision at the High Court if it lodges papers within the next six weeks.

A spokesperson said the business was “disappointed” with the secretary of state’s decision. “We are currently considering our options,” they added.

Ross Hutchinson said his team had given their all to the Whitechapel Square scheme over the past seven years, and that Brokenshire’s response to Nicholson’s advice risked freezing the site in its current situation.

“It is a site and a project that we care about very deeply and very passionately,” he said.

“As such it has been quite hard to accept that the secretary of state has gone against the recommendation of the planning inspector in refusing permission.

“Our disappointment and fear is that the site will now forever be defined by the blank inactive frontages, barb-wired service yard and fenced-off tarmac car park of the existing supermarket instead of becoming the place of vibrancy, activity and life that we had envisaged for the people of Whitechapel.”