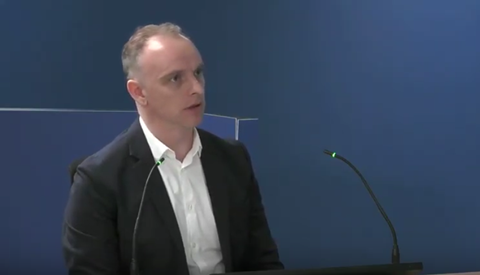 Studio E could not be expected to sign off the drawings of specialist designers, project associate Neil Crawford told the Grenfell Tower inquiry.

The knowledge required to scrutinise the work of specialists was beyond the scope of a novated architect’s expertise, he said.

It was the point of employing specialists, he added.

Crawford, the third Studio E staffer to give evidence this week, joined the firm from Fosters in 2009 and took over the Grenfell project from colleague Bruce Sounes in 2014. Sounes was taken ill during his evidence on Wednesday and a date for his return to the inquiry , which is due to resume on Monday, has not been given.

Crawford said his role after Studio E was novated to main contractor Rydon was to check drawings for compliance with “architectural intent” and to flag up any “manifest” – or glaring – problems.

“It’s simply not feasible for an architect to review every drawing on a project in detail particularly where some of the design packages will have been carried out by specialist designers who are skilled in their particular field,” he said in his statement shown to yesterday’s hearing.

For example, an architect would not be expected to understand in detail how lifts worked, he said.

He was asked by inquiry barrister Richard Millett QC: “Do you agree issues such as specification of materials that don’t comply with Building Regulations should be manifest to an architect?” a statement he agreed with “in general terms”.

He was then shown some remarks he had made on a number of facade specialist Harley’s drawings, such as pointing out that there could be a risk of air leakage through a proposal for fixing membrane construction.

Asked if that counted as architectural intent, he replied: “It might come under the heading of manifestly wrong.”

Millett said: “On the face of it these look like quite granular technical details.”

Crawford also told of his surprise when Simon Lawrence, Rydon’s project manager, told him early on that “Rydon tended not to use its architects as much as we might do”.

“As such he consigned Studio E’s role to being more responsive, with Rydon maintaining a greater degree of control over the design process than I would normally expect from a design-and-build contractor. In that regard I had less to do for Rydon than I expected,” said Crawford, who said this surprised both him and Sounes.

Millett asked why, if that struck him as “slightly unusual”, he didn’t make a record of the conversation or ask for clarification.

Crawford said contractors “can vary quite dramatically” in the way they work.

“[Lawrence] was very hands on. He would do things another contractor might automatically seek to push out to a sub-consultant,” said Crawford. “He saw it as expedient to get things done.”

Crawford added: “One of the reasons I didn’t have any concerns was because from the interaction I had from him I saw he was more competent than your average person in that role.”

He added: “I wasn’t entirely sure why he said it to me. I was hounding a bit to get building control on board. I had sent several emails. Sometimes project managers want a greater degeree of control.”

In a full day of examination, Crawford was also asked whether he had checked various aspects of the design for compliance with Building Regulations. He said he had not because the building had already been designed by the time he joined the project and he expected others would have done that.

“When you come on a project particularly as late as I was, at stages JKL, those things have already been dealt with and covered,” he said. “You wouldn’t be going back to the start unless you felt there was something inherently wrong with what you had inherited.”

The inquiry is expected to run until summer 2021.