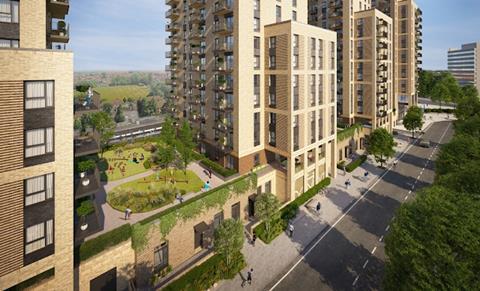 The 454-home Wembley scheme has been approved by ministers

A 454-home mixed-use development designed by Tate Hindle in north-west London have been approved by a minister after a public inquiry.

Eddie Hughes, a junior minister, approved the Barratt and Transport for London development next to Wembley Park tube station this week

The plans involve five new buildings on a 0.7 hectare site encompassing the car park next to the tube station. Existing structures, including buildings used as train crew accommodation, will be demolished and replaced with five buildings ranging from seven to 21 storeys in height.

The application was approved by Brent council in November 2020, however last summer then housing secretary Robert Jenrick called in the scheme, wanting to know whether the scheme would conserve the historic environment and accord with the council’s local development plan.

A number of residents and a councillor had raised concerns about the density of the scheme, the loss of the existing car park and the impact on privacy and light on nearby residents.

In a decision letter published yesterday Hughes backed the inspector’s findings. The letter listed the re-use of suitable brownfield land for homes; the provision of affordable housing; the economic benefits of supporting and creating jobs, the quality of the scheme’s design and accordance with Brent council’s draft local plan as reasons for approval.

He said this outweighed arguments against, including the shortfall in family and accessible housing, private outdoor space, play space, urban greening and impact on views from the Barn Hill Conservation Area. “He considers that the shortfalls would be minor and/or justified by the site-specific circumstances,” the letter said.

A total of 454 new homes will be built of which 152 are affordable, with 73 for London Affordable Rent and 79 intermediate housing. Only 10% of the homes will be three-bedroom or more, despite the council’s requirement of 25% family sized housing. However the inspector said a tall scheme on the edge of a town centre is not suitable for family housing and the fact that all the larger units are affordable offsets the lower amount of a larger homes.