Khan signs off on Bishopsgate Goodsyard 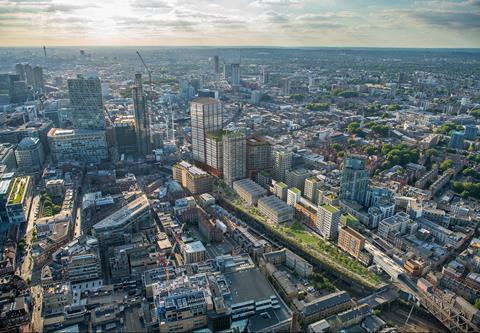 Aerial view of the revised Bishopsgate Goodsyard proposals from July 2019

Final planning approval has been granted by the London mayor to Ballymore and Hammerson’s 500-home Bishopsgate Goodsyard development, masterplanned by Faulkner Browns.

Sadiq Khan gave backing in principle to the scheme at a public hearing in 2020, but now the Greater London Authority has finally issued legal planning permission, listed building consent and a section 106 agreement for the major redevelopment of the City fringe site, which sits on the border of Hackney and Tower Hamlets.

The developers of the original PLP-designed scheme for the site were forced to go back to the drawing board in 2016 after GLA officials recommended refusal of the proposals, which featured 1,400 homes in towers of up to 46 storeys, following a vigorous campaign against the plans by Hackney. 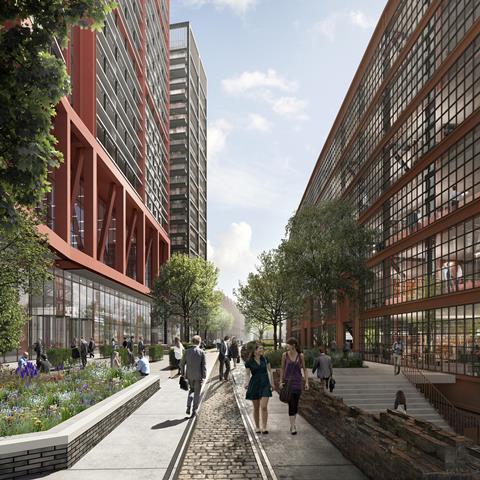 The new masterplan, drawn up by Faulkner Browns, includes 10 buildings and just over a third as many homes, with a 29-storey office block designed by Eric Parry Architects marking its highest point. As well as housing, the scheme includes 131,000 sq m of space for business use and an 11,000 sq m hotel, plus a further 18,400 sq m of retail, financial and professional services usage. It will also get a New York-style high line park.

Other architects involved with the scheme include Buckley Gray Yeoman, Chris Dyson and Spacehub.

The section 106 planning-obligation agreement negotiated by City Hall will see the developers pay £71m in Community Infrastructure Levy and affordable housing contributions to the GLA and the two London boroughs, plus a further £7m toward new bus infrastructure. Half of the homes will be affordable. 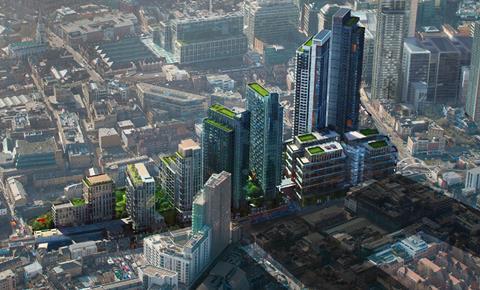