A government official reprimanded the UK’s leading construction products certifier after it made a “dangerously misleading” error in its certificate for an insulation product used on Grenfell Tower, the inquiry has heard.

The British Board of Agrement (BBA) said in its certificate for Kingspan’s K15 insulation that the combustible insulation could be used in accordance with amendment 12.7 of Approved Document B of the building regulations, which covers fire safety matters. 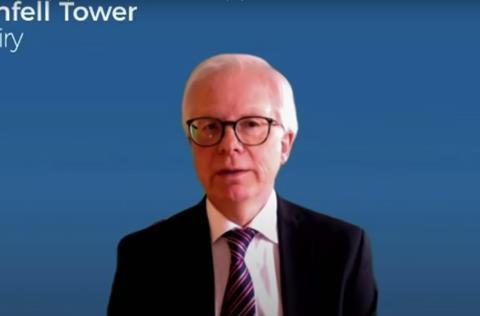 Approved Document B states that insulation products used in external wall construction on buildings above 18m should be of limited combustibility, with these restrictions not applying to masonry cavity wall constructions.

But the inquiry heard on Thursday that the BBA’s certificate did not make clear that it referred only to the important second part of the amendment, instead simply stating that the insulation could be used in accordance with the entire amendment.

Counsel to the inquiry Rachel Troup asked former BBA head of approvals Chris Hunt: “Can you assist me any further with how K15 could be used in accordance with the provisions of that section?”

Hunt, who held his role at the time that the certificate was written, replied: “I think, you know, in a situation where it was insulation within a masonry cavity wall construction.”

Troup asked: “Why does the certificate not simply say that?”

Hunt replied: “That I don’t know.”

Inquiry chair Martin Moore Bick questioned Hunt further on the danger of the BBA’s wording of the certificate, asking: “Does that not risk at least giving the impression that it can be used in buildings over 18 metres because it is of limited combustibility?”

Hunt said that there was a “risk that it could be read that way”, agreeing that this could have been avoided by indicating that the certificate was only referring to the exception of the amendment.

Asked by Troup if he accepted that this was “potentially quite dangerously misleading”, Hunt replied: “Yes, I think it should have been clarified.”

The error prompted Brian Martin, the official at the then-Department for Communities and Local Government who was responsible for Approved Document B of the building regulations, to write to the BBA in July 2014 reprimanding the wording of the certificate.

Although the wording in question had by this time been removed, Martin told the BBA’s then-head of approvals John Albon that it had constituted a “serious safety matter”.

Martin wrote: ”I am concerned that the original certificate may have been issued in error. As this is a serious safety matter, I would appreciate it if you could investigate and advise me of the outcome of your investigation as soon as possible.”

Albon responded to Martin writing that the mistake had been “caused by human error” and that the project manager involved and their line manager no longer worked in the BBA’s operations department.

The inquiry heard earlier this week that the BBA’s certificate for K15 had given it a class 0 rating despite the certifier never seeing test data for the product.

Instead, the rating was based on test reports dating back to 1991 of different Kingspan products which also contained combustible phenolic foam cores.

The BBA’s former deputy chief executive Brian Moore told the inquiry that it was “not unusual” to extrapolate data from one product to another, although he added that “can’t be certain whether that is permitted” under UK fire regulations.

The inquiry also heard this week that the BBA had renewed its certificate for another product used on Grenfell Tower, Arconic’s Reynobond PE ACM panels, based on incomplete test data and information on the supplier’s website after the firm failed to provide the required material for the renewal.

The inquiry has already found that the ACM panels used on the tower’s flawed refurbishment were the “primary cause” for the rapid spread of flames up the sides of the building, while the insulation products used in the cladding system “more likely than not” contributed to the fire which claimed 72 lives in June 2017.