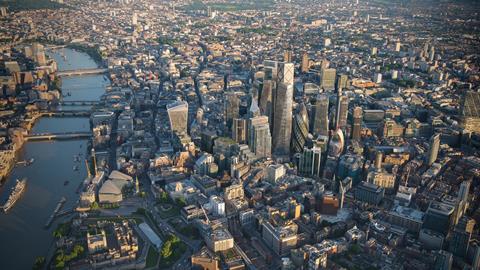 The City of London has firmed up its City Cluster Vision proposals to make the Square Mile greener and more pedestrian-friendly, with wider pavements and more restrictions on traffic as its tall-building count increases at “unprecedented” levels.

New towers such as PLP’s 22 Bishopsgate, SOM’s 100 Leadenhall Street, Eric Parry’s 1 Undershaft and Make’s 1 Leadenhall are part of the upwards drive that is projected to see 60% of the Square Mile’s new office floor space delivered in the Eastern Tall Buildings Cluster.

The City’s director of the built environment, Carolyn Dwyer, said the expansion would introduce an additional 75,000-100,000 workers into the cluster over the next decade and that the final version of the vision aimed to offset the figures with a greener and safer environment at ground level.

“Were the Corporation not to respond to these challenges, the existing over-crowded streets and spaces will fail to cope with the increased numbers, resulting in road safety risks and also reputational risk to the City Corporation,” Dwyer said. 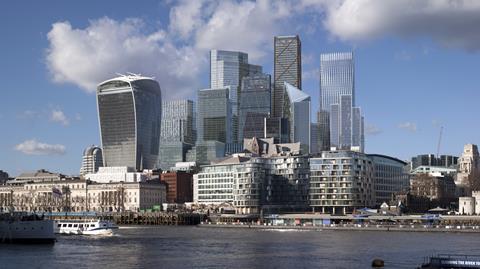 How the City of London will look from City Hall by 2026, if the current pipeline of consented towers is built

In a report to today’s meeting of the City’s planning and transportation committee – which is tasked with approving the adoption of the vision, Dwyer said the plan would ensure the cluster’s streets and spaces “function well and respond to change”, “create a world-class destination” and “provide healthy and characterful spaces”.

The vision has been drawn up by the City in conjunction with local businesses, the City Property Association, the City Architecture Forum and local wards.

Dwyer said that more than 300 responses had been received to the public consultation on the vision that ran last summer, and which she said had “revealed widespread public support”.

Works outlined in the vision will be paid for with planning gain funding related to developments, including Section 106 funds, Community Infrastructure Levy payments, and finance from mayoral body Transport for London.

Over three phases, the plan initially proposes trials for greening projects, traffic-management studies and work on the under-construction 22 Bishopsgate and 150 Bishopsgate towers, the latter also designed by PLP.

A second phase involves the widening of footpaths in St Mary Axe and Leadenhall Street, and exploring new traffic restrictions in those streets – as well as further green-space initiatives.

The third phase will shift focus to Bevis Marks and Creechurch Lane, and the potential start of an “activation programme” for public spaces that the City expects to be led by local business groups – possibly working as a joint Business Improvement District.

Dwyer said the introduction of new greenery in streets and public spaces had been “by far the most popular proposal that was consulted on” in public sessions, and that space for space for agile working and a “variety” of additional uses had also been given a high priority. 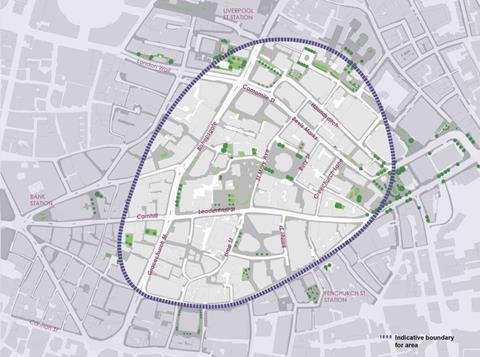 Footprint of the City of London’s Eastern Cluster

She added that one change to the cluster footprint had been the decision to ascribe a “soft boundary for the area” and to place more emphasis on connections to surrounding transport hubs, including Liverpool Street Station and Fenchurch Street Station.

A softer boundary for the cluster would potentially allow for the incorporation of Rafael Viñoly’s Walkie Talkie tower, which the City controversially approved for a site outside of its Eastern Tall Buildings Cluster.

Dwyer concluded: “It is recommended that the City Cluster Vision is adopted as a framework for changes to the streets and public realm in order to accommodate the unprecedented growth in the area over the next ten years, helping to deliver the aims of the Transport Strategy and the emerging Local Plan.”