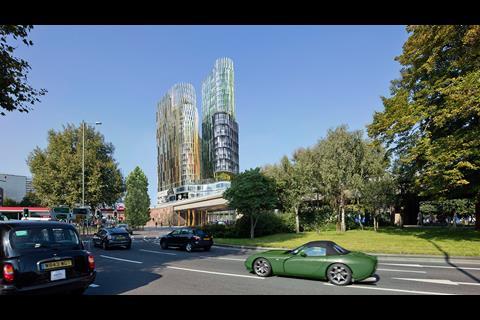 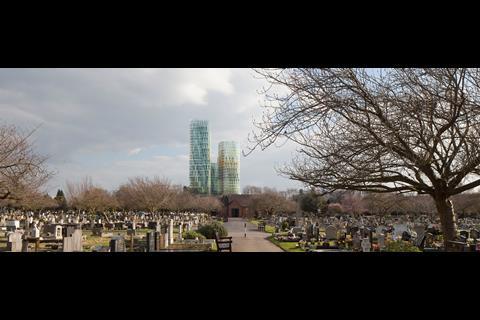 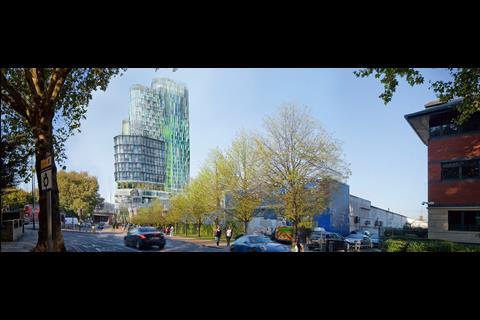 Housing secretary James Brokenshire has decreed that a 327-home west London tower designed by Studio Egret West should be denied planning permission – against the advice of a planning inspector.

Hounslow council refused planning permission for the 32- and 25-storey mixed-use development in Chiswick in 2017, which was a rejigged version of proposals originally submitted in 2015. But developer Starbones, a subsidiary of Galliard Homes, appealed and a public inquiry overseen by planning inspector Paul Griffiths was held last summer.

In a just-published 172-page report to Brokenshire, Griffiths called on the secretary of state to approve the scheme, known as the Chiswick Curve, concluding that it would “mark the country’s commitment to quality and sensitivity which will act as a badge to our commitment to the best of the new”.

The secretary of state disagreed, arguing that the design of the proposals could only be considered “broadly neutral in the planning balance” and could not be seen as a key benefit of the project.

Conversely, Brokenshire said the proposal’s impact on the Kew Gardens World Heritage Site, and the Strand-on-the-Green, Kew Green and Gunnersbury Park conservation areas needed to be given “great weight”.

A decision letter sent on behalf of the secretary of state said that while the scheme – earmarked for 0.28ha site next to Chiswick roundabout – responded to a number of specific challenges and constraints in a “positive way”, it was not good enough to mitigate the harm it caused.

“[The secretary of state] does not find the proposal to be of such high quality as to be a brilliant response to its immediate context,” the letter said.

“He finds the scale and massing of the proposal to be such that the proposal does not relate to its immediate surrounding. While he recognises that attempts to minimise this impact have been taken with regard to glazing and fins, the building would still dominate the surrounding area.

“He considers the design to be a thoughtful attempt to respond to the challenges and opportunities of the site, but due to its scale, he disagrees with the inspector that it is a significant benefit of the scheme.”

The site of the Chiswick Curve – known as Chiswick Tower by SEW – is where the capital’s North Circular and South Circular roads meet with the M4 flyover and has a long planning history.

Make Architects’ offbeat LED-wrapped “Octopus” office building was consented for the site in 2011, only for the 10-storey structure be dropped when the developer line-up changed.

Starbones has six weeks to launch a High Court challenge to Brokenshire’s decision on the Chiswick Curve.