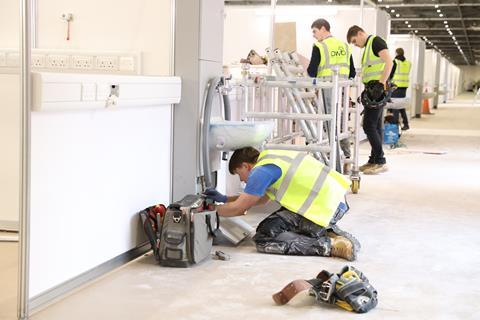 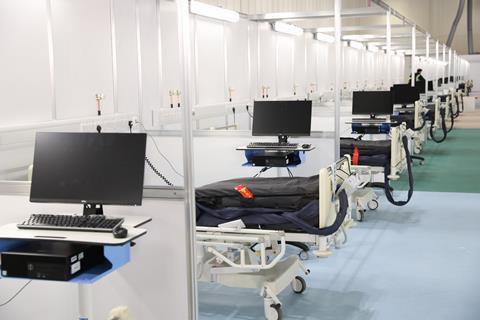 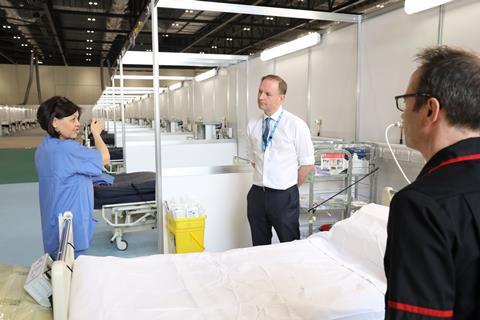 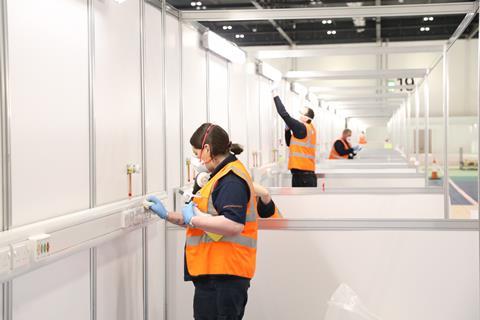 The site being cleaned ahead of opening 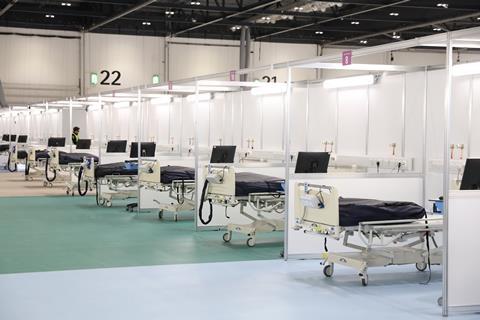 Each bed area occupies an approximate space of 14m2 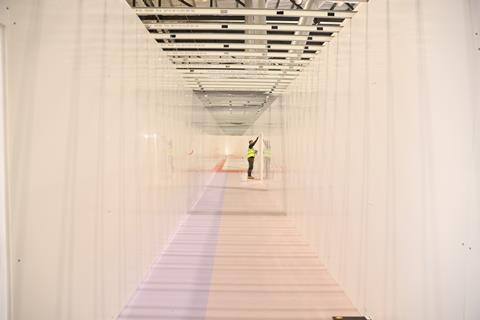 A central boulevard divides the north and south wings of the complex which occupy around 44,000m2 each

The team behind the NHS Nightingale hospital in east London is set to get the remaining 3,500 beds planned for the temporary complex ready in record time.

The work to finish the emergency hospital at the ExCel Centre, normally used for trade fairs and exhibitions, is expected to take just several weeks – rather than the years a 4,000-bed complex would normally take.

It was designed by BDP and opened remotely by Prince Charles on Friday with the first 500 beds now available to take in patients, who are expected to begin arriving shortly.

It is the first and largest in a series of emergency hospitals being rolled out by the NHS to deal with the covid-19 pandemic across the country and includes sites at Cardiff, Bristol, Birmingham, Manchester, Harrogate and Glasgow which will total 7,500 beds.

The first stage of work at the ExCel has been completed in just 10 days and at peak the site had 500 workers on it with some parts of the job, such as installing miles of electrical cabling and critical medical equipment, carried out at night.

Contractor Mace was brought in two weeks ago by the hospital’s operator, Barts NHS Trust, the east London trust which runs five hospitals including Barts and the Royal Free, and programme manager KPMG to provide programme and project management services.

Led by Frank Randles, who heads up Mace’s sports and events business, the team expects to be able to deliver 500 intensive care unit beds every six days.

“It’s a bit of a moving feast over how many beds there will be, it will depend on how much is required,” Randles said. On Friday, the NHS said hospitals in London, which is at the centre of the crisis in the UK, were coping with demand so far.

Randles said Mace has around 30 staff working on the project with the chief executive of the firm’s consulting arm, Jason Millett, also visiting the site every 48 hours.

Millett said: “It’s been a great example of what the whole industry can do when we’re asked to step up.”

Randles added: “It’s been a huge logistics operation to stock up a hospital in terms of bed and equipment. People call it a field hospital but it’s much closer to the standards required by a normal hospital.”

BDP’s team is led by principal James Hepburn and architect director Paul Johnson. The practice was contacted to help deliver the specialist healthcare conversion because it had undertaken a study proposing the use of exhibition centres for large-scale temporary ICU facilities.

Hepburn said: “It was a very intense and exhausting first nine days, but it is a project that we are immensely proud to be involved in. BDP is part of a monumental team effort which is thriving in a proactive collaborative environment where everybody is pulling in the same direction to deliver this vital healthcare facility.”

Every bed will have its own computer station so doctors can better manage a patient’s care while it is expected at least 12,000 people will be working at the site in addition to the 4,000 patients.

Other requirements have included building a pharmacy as well as clinical waste and welfare facilities.

The nearby University of East London is making up to 500 rooms normally used by students available for doctors, medics and other hospital staff working on the site.

Around 300 workers are expected to be required to complete the remaining beds and Randles admitted some had expressed concerns about the threat of catching coronavirus, with worries growing once the first patients, all of whom are expected to be seriously ill with the disease, are admitted.

“We had a town hall meeting in a very large area about it all to give the guys some reassurance,” Randles added.

Measures being taken include a clinical wall between the hospital site and the construction site while a series of 15m wide ‘buffer zones’ have also been added – described by Millett as a no-man’s land between the two parts of the site.

He added: “We wanted to ease that anxiety with what is effectively an extra safety zone. There’s no reason why anyone from the construction side will go into the hospital side. We’ve done an awful lot of work around wellbeing and messaging.”

>> Also read: How to adapt hospitals to cope – and lessons architects must learn for the future

The site has received wide praise for the speed of the build and the collaboration between the NHS, Ministry of Defence and the ExCel.

Randles, who has been working 14-hour days at the job, added: “It’s been a complicated few weeks but there’s been a really positive spirit. Everyone has laboured for the same thing. Everybody has collaborated really well. People’s attitude has been all about getting the beds ready so people’s lives can be saved. If we could bottle the spirit in which this has been delivered, the industry would be in a better place.”

The centre was an obvious choice for conversion due to its large flat floor hall spaces with flexible MEP infrastructure that can be easily adapted to meet the needs of the temporary hospital.

In order for the volume of equipped beds to be delivered within a short timeframe, all the teams made immediate decisions to allow construction to progress in parallel with the design. Solutions had to be flexible, quick to construct and take into account procurement channels to allow fit-out activities to commence immediately.

A modular, repeatable approach with minimal building intervention was adopted to ensure rapid delivery. The bed heads and service corridors have been constructed from a component system that is usually used to construct exhibition stands. Simple reinforcement allowed for services to be fitted to the walls and the existing electrical infrastructure was modified to increase the resilience, UPS and temporary generators.