A coalition of nearly 30 groups representing high street shops, property developers and planners have written to housing secretary Robert Jenrick urging him to abandon plans for an “uncontrolled” expansion of residential conversions.

Signatories to the letter, which include RIBA president Alan Jones, the British Property Federation, the Association of Town and City Management, the British Independent Retailers Association, the Royal Town Planning Institute and the RICS, said the planned introduction of a blanket permitted development right to convert high streets to homes would create a “vicious circle” threatening the long-term health of town centres. 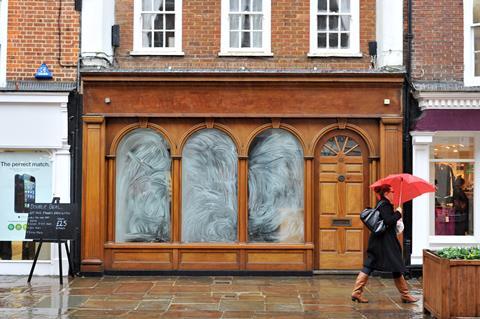 The letter to Jenrick is a latest sign of the growing backlash to the plans even from groups, such as London First, that have previously supported the government’s efforts to liberalise town centre planning rules.

The 27 signatories to this letter argue that the right to convert shops, offices, restaurants and other uses to homes without permission in a “random and uncontrolled manner”, will not draw footfall to centres, but instead reduce the potential for business growth and threaten the viability of existing commercial uses, with landlords likely in many cases to see greater returns from housing.

The government proposed in December that any properties in the recently created use class “E”, which covers the vast majority of high street commercial uses, be given the unlimited right to convert to housing without full planning permission.

The idea is that the new PD right, which is earmarked to come in to force in August, will replace existing rights allowing the conversion of offices, small shops and light industrial uses to homes that have been in place since 2013. However, the new right will apply to many types of premises – including all shops, restaurants, GP surgeries and day centres – that have never previously had a right to convert to homes.

Launching the consultation, the government said the right will ”support economic recovery, housing delivery and the regeneration of our high streets and town centres”.

However, today’s letter said the right will instead “create a vicious circle whereby the reduced viability of the remaining commercial uses in turn threatens their existence and incentivises their conversion to residential”, adding that local neighbourhood centre will be particularly at risk, given low commercial land values.

“The loss of local shops and services could precipitate their decline at a time when we are putting greater emphasis on the need for walkable neighbourhoods which provide a range of day-to-day needs in local centres. A change of use to housing is a one-way trip.

It added the right could even threaten the existence of more marginal uses such as financial and legal services, health centres, GP surgeries, Post Offices, community centres and hubs, gyms, leisure facilities, education, co-working spaces, and life sciences – all of which would be include in the right.

The letter called instead for more support to be given for local authorities to plan the necessary evolution of town centres as they respond to the growth of online retail and working from home. The intervention comes after Norman Foster appeared to back the government’s moves in a speech calling for a relaxation of town centre “zoning” restrictions to help high streets struggling in the wake of the pandemic.

A consultation on the plans ended at the end of last month, and the government has said that it will respond in due course.

>> Also read: The vision behind the welfare state is a model for how to rebuild after covid

The full list of signatories to the letter is: