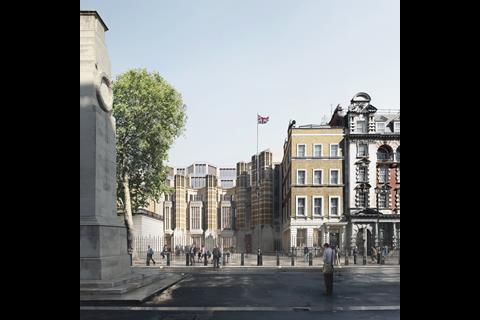 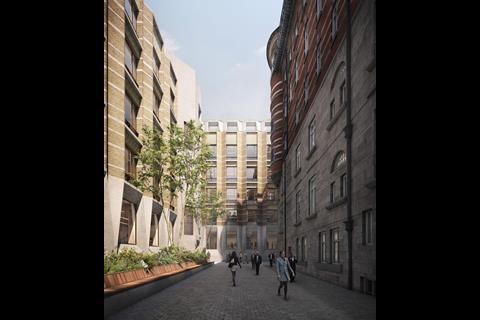 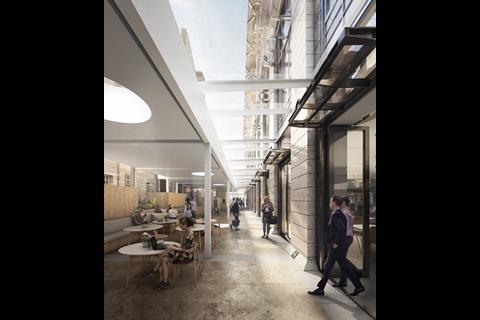 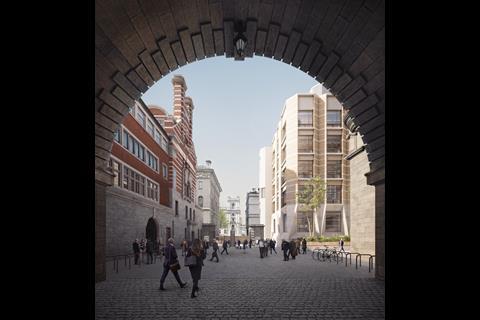 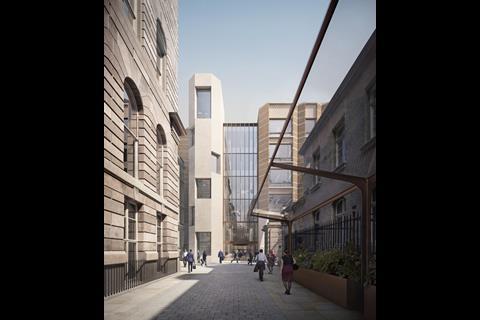 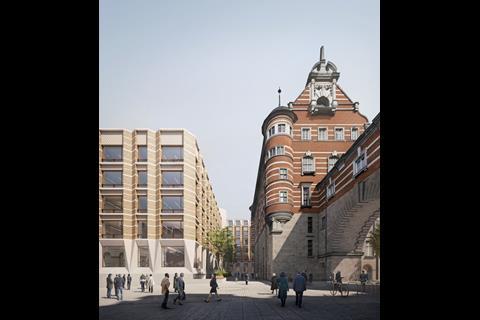 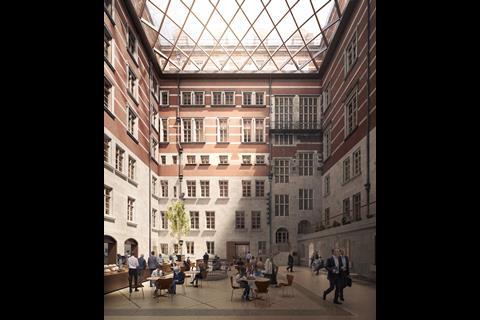 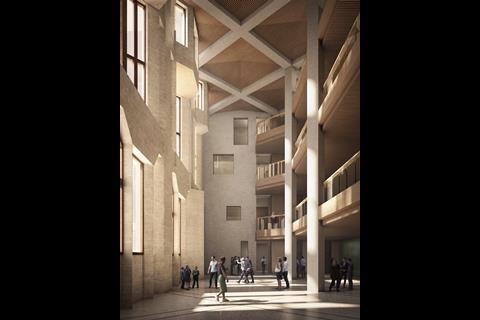 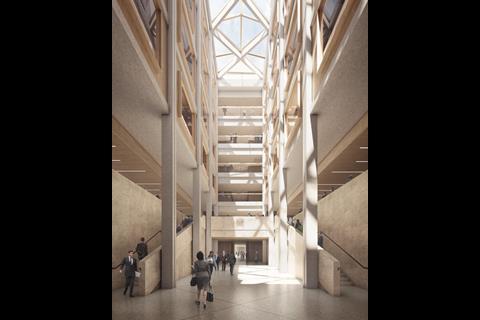 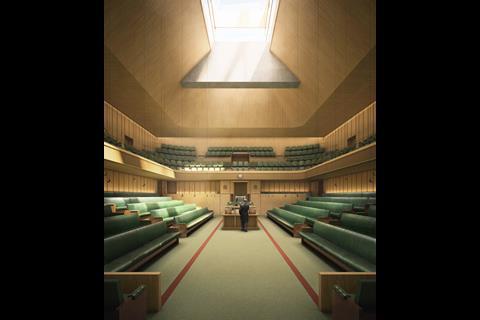 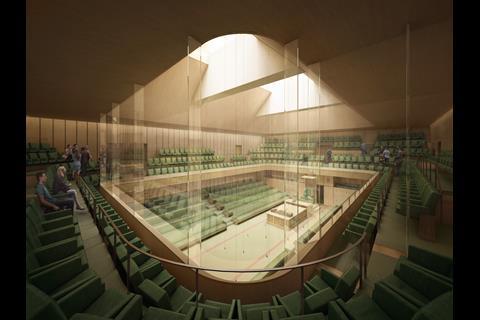 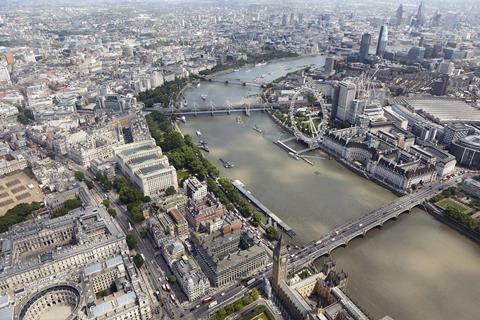 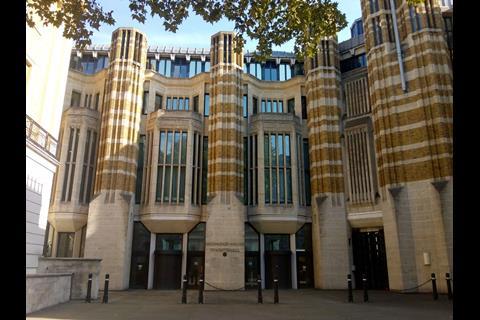 A series of planning applications for BDP’s Northern Estate programme have been submitted to Westminster council, including new images of AHMM’s temporary Commons chamber.

The plans, which are for buildings that run along Parliament Street and Whitehall, including the grade II-listed 54 Parliament Street, the grade I-listed Norman Shaw North building and the grade II*-listed Richmond House, are the first step to enabling the restoration and renewal of the Palace of Westminster.

AHMM’s temporary chamber will be built inside Richmond House, the former Department for Health building at 79 Whitehall which the ministry left in November 2017.

The plans have upset conservationists because of the damage that will be caused to the 1986 building designed by William Whitfield. They have used rival architects to come up with alternative proposals, but these have been dismissed by Parliamentary authorities. 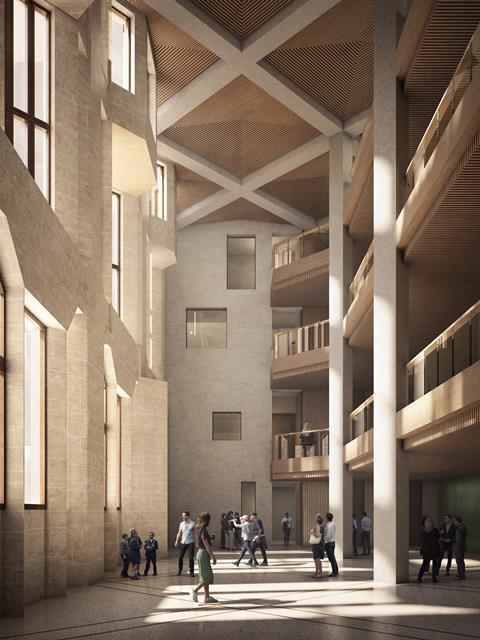 Eager to divert attention from any further attempts to save Richmond House, which would upset the timetable to refurbish the crumbling Palace of Westminster, they issued a statement about the planning application saying: ”The building which replaces Richmond House will be of exceptional architectural quality, designed by Stirling Prize-winning architects Allford Hall Monaghan Morris, one of the UK’s leading architecture practices. It retains key frontages visible to the public – the Richmond Terrace and the Whitehall façade, revealing internally the full scale of the Whitehall façade with a triple-height central lobby space.”

A public consultation was launched on the proposals in May which resulted in a security pavilion planned for the front of the building being moved inside after complaints that it would block views of the building from Whitehall. 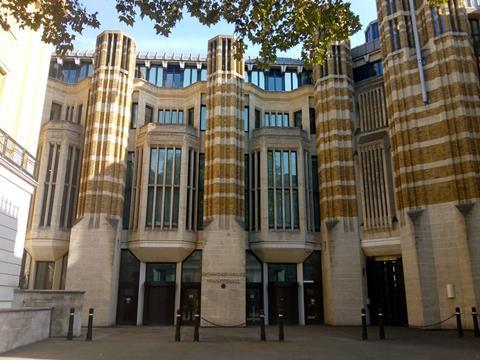 BDP won the job of working on all the other buildings within the Northern Estate programme in 2016. The architect also won the biggest prize of all - the £5bn restoration and renewal of the Palace of Westminster, which it won in competition with Foster & Partners, HOK and Allies & Morrison.

Liz Peace, chair of the shadow sponsor board for the restoration and renewal programme, said: “The Palace of Westminster is universally recognised as an icon of democracy and is arguably our country’s most important listed building, yet sadly it remains in urgent need of repair after years of under investment.

“Our plans for the Northern Estate remain the essential first step to enable the restoration and renewal of the palace to take place.

“The designs will create an exceptional and lasting legacy for Parliament, long after the House of Commons has returned back into the palace and ensure that all MPs can work from a single, secure site which is a key requirement during the decant period.”

Work on the Northern Estate is set to begin next year, ahead of work on the Palace of Westminster starting in the mid-2020s. 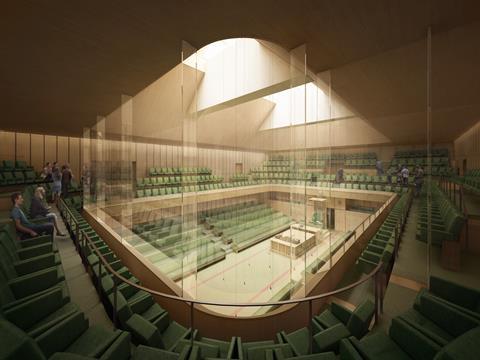 The proposals for the Northern Estate will create a temporary House of Commons Chamber and associated facilities, together with workspace for MPs and staff and public access and educational provision. It is the essential first step to enable the restoration and renewal of the Palace of Westminster and will deliver a transformed Parliamentary Estate for future generations. Proposals include:

A temporary House of Commons Chamber within a substantially redeveloped Richmond House, alongside essential facilities required around the Chamber for the continued functioning of Parliament, in addition to new workspace. The proposals retain Richmond Terrace, the Whitehall façade and 54 Parliament Street/85 Whitehall.

Improvements to the grade I Norman Shaw North Building, with a new lightweight glass atrium created in the courtyard, re-activating this historic space, along with conservation repairs to this highly significant building and internal improvements to meet modern standards.

A new building within the existing courtyard of the grade II* Norman Shaw South, that will become office space for MPs and staff while providing enhanced courtyard space.

Significant conservation improvements to other historic buildings, including to the rear elevations of the buildings fronting Canon Row and at 2 and 3 Parliament Street to improve internal layouts and modernise plant and equipment.

A link to connect Portcullis House with the wider Northern Estate, with expanded catering facilities to the rear of the building opening out on to Canon Row for informal meetings.

Enhanced security and improvements to the external environment, required to ensure the House of Commons can operate in a safe and secure environment while works to the Palace of Westminster take place. The proposed arrangements include railings and bollards that can be removed during ceremonial occasions.

New internal landscaping, to improve accessible circulation across the estate and the setting of the listed buildings, re-establishing the historic Canon Row as the central spine connecting the buildings together into a ‘campus’ environment along with new trees and planting for environmental benefits. 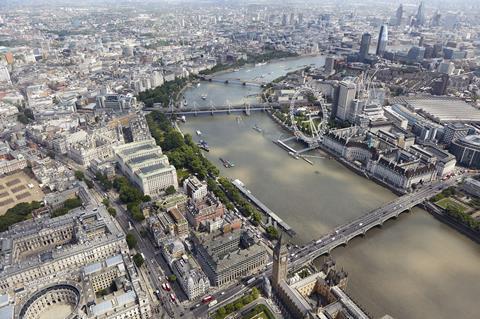