The approval for Essex-based housebuilder Stonebond will be the first on site at the 6,500-home development near Cambridge. The scheme, designed by housing architect Pollard Thomas Edwards, will include 28 affordable homes, and both apartments and larger detached homes.

Stonebond is owned by brothers Richard and Graham Cherry, sons of the late founder of housebuilder Countryside, Alan Cherry. They recently installed former Countryside CFO Andrew Cornelius as chief executive of the business, which they plan to float on the stock exchange within five years. 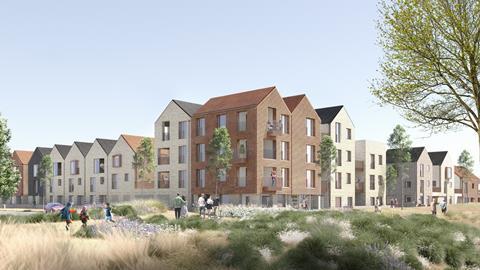 Cornelius said: “We’re looking forward to working with Urban & Civic at this hugely exciting new community. Delivering more mixed-tenure developments, such as this one, and working with housing providers, local authorities and master developers, are a key part of our ambitious plans for growth.”

Cllr Pippa Heylings, chair of South Cambridgeshire District Council’s planning committee, described the scheme as “a high-quality design created by an award-winning architect”. She said: “We are pleased to have supported these plans which will see the first new homes come forward as part of this carefully-planned new town.”

Stonebond turned over just £21m in covid affected results for the year to October 2020, from the sale of 52 homes. However, the firm has plans to be building 1,000 homes per year within four years, from four regional offices.