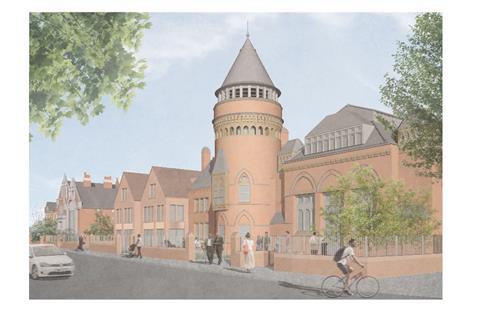 Image of how the Ladywell Playtower will look from the station

Lewisham council has finalised an agreement allowing Pringle Richards Sharratt’s plans to convert a derelict Victorian baths building into a cinema to proceed.

Developer Guildmore and independent cinema operator Lyn Goleby will work with the architects to create a four-screen cinema with restaurant and bar. It is due to open to the public in 2024.

The grade II-listed Ladywell Playtower in south-east London was built in 1884 and became one of the first public swimming pools in the country.

It closed in 2004 and after a fire became one of Historic England’s top 10 at-risk listed buildings. By 2015 it was on the Victorian Society’s ‘most endangered’ list. The estimated cost to restore the former baths is around £8m.

Malcolm McGregor, director at PRS Architects, told Building Design that because the plans had been on hold for two years a lot of work is currently being done to update the proposals, for instance to replace gas boilers with a heat recovery system. Flooding in the building had also since been found to be an issue.

He said he hoped a planning application will be submitted in the next three or four weeks. 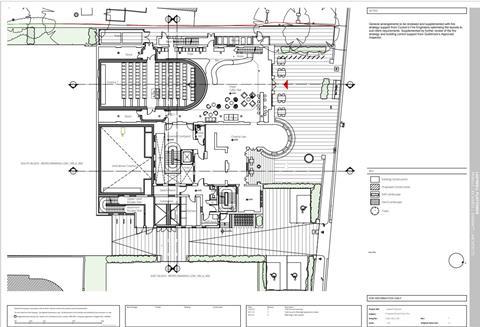 PRS and Guildmore have been working on the project, which should also see 33 new homes built, for five years but it has been on hold because of the pandemic and after the previous cinema operator withdrew from the project.

Damien Egan, mayor of Lewisham, said: “I am delighted that plans for the restoration of the Ladywell Playtower are back on track after the uncertainty of covid.”

The Playtower originally opened in 1884 as a swimming pool and public hall. It closed as a pool in 1965 and was used by younth clubs but has fallen into serious disrepair since it closed to the public in 2004.

Public support for the project has so far been strong, with 97% of 200 people at a public consultation in January 2020 being in favour of Ladywell Playtower being restored.

Historic image of the Playtower