Multiplex has become the first major contractor to shut down sites voluntarily after the prime minister put the UK on a three-week coronavirus lockdown last night.

It was immediately followed by a string of other firms including ISG and Taylor Wimpey.

The firm is working on a string of high-profile jobs in London including PLP’s 22 Bishopsgate tower, which is close to completion, KPF’s One Nine Elms twin-tower scheme and Squire & Partners’ luxury apartments scheme called the Broadway next door to St James’s Park station. 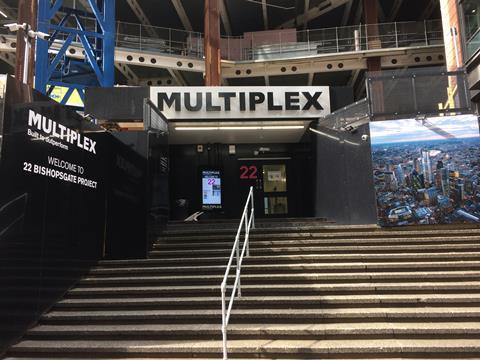 The firm is main contractor on the City’s tallest tower, 22 Bishopsgate

In an email seen by Building Design’s sister magazine, Building, that was sent to the firm’s 900 staff late last night, the firm’s chief operating officer Callum Tuckett said: “In response to the prime minister’s public address earlier tonight, we have no reasonable option but to close down all construction sites immediately and until further notice.

“Construction is not likely to be defined as ‘absolutely necessary’, we are seeking clarification of this but we feel the best and most appropriate action is to close our sites.”

Tuckett said the firm, which is also working on the Elephant & Castle shopping centre scheme, had taken the decision because it was no longer possible for sites to stick to government guidelines aimed at combatting the virus.

He added: “It is not a decision that we have taken lightly. At each step of the way during this global crisis, we have carefully weighed up and complied with all of the government and medical guidance that has been issued.

“We recognise that a large proportion of the labourers that work on our sites are self-employed and rely upon site being open to generate their livelihood. So, in line with government guidance, we have sought to keep sites open whilst deploying stringent measures to ensure that operations are undertaken safely, including by implementing social distancing and cleaning protocols according to government best practice.

>> Also read: Architects split on whether construction sites should close

“The latest guidance from the government is clear, the deployment of such safety measures is no longer enough. All unnecessary travel outside the home must be stopped. Whilst the construction industry has undoubtedly a significant role to play as a key driver to the UK economy, we acknowledge that it is not so essential that we can expose our stakeholders and the wider community to the risk of physical harm.

“We also recognise the paramount obligation that all businesses now share to avoid placing any further strain on the NHS, which is going to heroic lengths to stem the spread of the virus and which needs our full support.”

This morning ISG and Taylor Wimpey followed Multiplex saying they will begin shutting down sites throughout the day.

Several other firms are expected to follow suit in the coming hours as the industry heads for an unprecedented mass shutdown of sites across the country.

ISG chief executive Paul Cossell said: “We are in unprecedented times and I have decided to take decisive action to help ensure people are protected against covid-19.

“Government advice continues to shift in the countries where we operate. What we know is that social distancing is absolutely key to safety – when travelling to site, entering and leaving site and also within sites themselves.”

ISG said it will suspend activity across sites which cannot meet an “enhanced risk profile test”, which includes the ability to operate a number of sittings in canteens, issues around hoists and site accessibility for workers who would normally use public transport.

It has not yet been confirmed how many sites are expected to shut but ISG said had begun letting clients know of its decision.

And in update to the City, Taylor Wimpey said it would shut down all its sites by the end of the day.

It said: “In the interest of customer and employee safety, we have taken the decision to close all of our show homes, sales centres, and construction sites for all work except that needed to make the sites safe and secure.”

Sales offices were not reopened this morning, the firm added.

Galliard Homes also said it was closing sites across London with immediate effect. “It will remove 2,500 Galliard construction workers from the London transport network,” the firm said.

The industry was left in limbo last night after a Cabinet minister said it was fine for sites to remain open – less than 90 minutes after the prime minister put the UK on a lockdown.

Get in touch with Building Design’s newsdesk by emailing elizabeth.hopkirk@bdonline.co.uk