Architect warns: ‘It’s now a battle for survival for a lot of firms’ 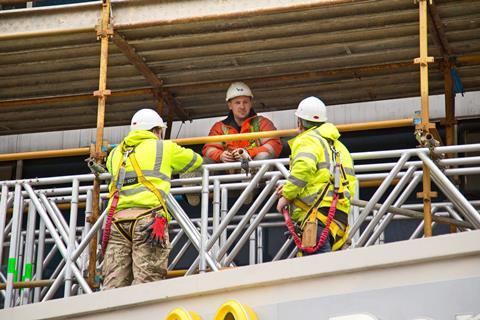 The mass closure of construction sites has been welcomed by architects – even though stalled projects will have serious consequences for many practices.

A partner at one leading architect warned: “This is now a battle for survival for a lot of firms in the sector.” He added it would have immediate effects on his practice.

Self-employed architects and sub-contractors are also facing enormous financial hardship as their wages dry up. They have so far been conspicuously excluded from all the chancellor’s promises to underwrite salaries.

Yesterday a wave of contractors and clients announced they would unilaterally close sites despite ministers’ official advice that they could stay open if distancing was observed. It came after mounting anger that construction workers were being expected to endanger themselves and others, with pictures of congested sites and canteens being circulated under the hashtag #ShutTheSites.

Multiplex was the first to announce it was shutting sites such as PLP’s 22 Bishopsgate in the City of London, followed by similar decisions from other big players including Mace, ISG, Taylor Wimpey, Barratt, TfL, Crossrail and HS2.

The news was welcomed by many in the profession, despite the knowledge that work stopping would have potentially devastating financial consequences.

The decisions have immediate impacts on PRP which we are starting to assess. This is now a battle for survival for a lot of firms in the sector

Brendan Kilpatrick, senior partner at PRP, said: “It’s the right decision. Large contractors cannot close head office and then expect their site-based staff and their loyal sub-contractors to carry on risking their health and that of many others.”

But he added: “The decisions have immediate impacts on PRP which we are starting to assess. This is now a battle for survival for a lot of firms in the sector.

“A real concern is the indefinite nature of the closures and the damage this does to the supply chain, if not the construction companies at the head of the chain.

“The government needs to think about implementing a strategy, probably through testing, for getting people back to work after the rate of increase of infection has been neutralised.”

Practices heavily reliant on project delivery are likely to be the most at risk since if architects can’t get on site they can’t bill for the work. “If you have a lot of projects on site you’re going to be freaking out,” one industry source said. Practices with a higher proportion of pre-planning design work will be better placed to ride out the storm.

“Over the last year the industry has seen clients committing to far less big tranches of work at a time, so resourcing has been a real issue,” said an insider at a large practice. “Clients haven’t been making appointments until very late on which is a problem. We’re well diversified but there will be some practices out there that will have some real problems.”

@BDonline We’re being advised by many of our contractors working on (relatively small) sites that they are stopping work due to concerns over health & safety, continuity of supplies etc. Can’t see many sites staying open beyond this week. https://t.co/MhXyQtXmrI

While hundreds of large sites are shutting this week, it was harder to get an immediate picture of smaller sites, although Building Design has heard anecdotal evidence of these stopping too, from one-off houses up.

Chris Hunt of Yorkshire-based Niche Design Architects, said: “We’re being advised by many of our contractors working on (relatively small) sites that they are stopping work due to concerns over health and safety, continuity of supplies etc. Can’t see many sites staying open beyond this week.”

Iain Sherman, of housing and regeneration specialist Stitch, said: “I have been speaking to the managers on our small sites. They are not happy. They say why do they need to be exposed needlessly. If public gatherings of more than two are banned why are construction workers excluded?

“One manager mentioned how hard it is to distance oneself on a site where workers move along passageways, rub against each other, share tools, collectively handle materials. And he shares a 3x9m cabin with two others.

“Let’s put Gove and Jenrick on a construction site for a day and see how quickly they get shut down. I feel quite strongly this is a bad decision.”

Another architect at a small practice told Building Design that if the government did not shut sites they would have “blood on their hands”.

One contractor emailed asking: “Are insurance companies going to cover construction workers if they fall ill to coronavirus? This could open up many claims in the future.”

While the closures are widely understood to be a necessity to stop the spread of coronavirus, there was huge concern for the predicament that self-employed sub-contractors and sole practitioner architects will find themselves in without support from the chancellor.

Richard Gatti, co-founder of BD’s Young Architect of the Year Gatti Routh Rhodes, said, before the wave of closures was announced: “I’m pretty conflicted about this: they closed down retail and hospitality pretty quickly, knowing thousands would lose their pretty precarious jobs immediately (the 80% furlough thing – has that actually saved many hospitality jobs? I think we’ll have to wait and see, but at least they tried).

“Construction industry jobs are different – they tend to be contract or self-employed rather than employees. Unless the government changes the rules about freelancers and the self-employed they won’t be supported by these rules, so effectively we’re asking them to become unemployed for an unspecified duration.”

>> Also read: Architects split on whether construction sites should close

“Construction workers should not be put at such risk,” she said. “Very few can work the recommended distance apart, they usually have limited recreational facilities, hence crowded canteens etc, and very often poor sanitary arrangements. A person working in the construction environment cannot be expected to ‘keep washing their hands’ – it is just not practical.

“These people have to get to work to earn their money. Until the government closes all sites and also offers support to self-employed people this situation will continue.

“Contractors and sub-contractors cannot simply decide to heed Boris Johnson’s rules for lockdown as, until the sites are ordered to close, these companies cannot apply for the grants to support their employees.”

Building Design reader Craig Marston, who runs a small regional practice, spoke for many when he said: “While I work for myself, I am not classed as self-employed, as my company is Ltd therefore [I am] employed by the company. But as the director I pay myself very little and take the rest in dividends. While appreciated, 80% of the ‘salary’ isn’t going to cover the basics. We already are hand to mouth.”

Health secretary Matt Hancock defended the decision not to order sites to shut in last night’s Downing Street press conference, saying: “The judgement that we have made is that in work, in many, many instances, the 2m rule can be applied.”

Get in touch with Building Design’s newsdesk by emailing elizabeth.hopkirk@bdonline.co.uk