Confusion as Gove and Jenrick say sites can continue

The construction industry was plunged into confusion last night after Robert Jenrick responded to the prime minister’s decision to put the country into “lockdown” by saying that it was fine for construction sites to remain open.

This morning another cabinet minister, Michael Gove, went on BBC Breakfast to confirm that “construction in the open air” can continue.

Jenrick, the housing secretary, sent out a tweet shortly after Boris Johnson’s 8.30pm adddress ordering people to stay at home, saying that “if you are working on site, you can continue to do so”, so long as advice on safe working distances was adhered to.

This advice was contradicted by a late-night series of tweets from Graham Watts, chief executive of the umbrella trade body the Construction Industry Council. He said that, while he expected some workers to come to sites today, for much of the industry this would be simply in order to prepare to shut down works safely.

Watts said that Construction Leadership Council (CLC) chair Andy Mitchell had been in touch with government following Johnson’s announcement about “secur[ing] much needed clarity about the position of construction sites, which may take until [this] morning”. He said: “The CLC chair has advised the Cabinet Office that the construction industry will come to work tomorrow [Tuesday], to prepare to shut down works safely, while awaiting further information.”

Watts added that: ”We hope that by tomorrow morning there will be much clearer picture of what can and cannot continue.”

This morning Gove said: “It is the case, as Robert Jenrick pointed out, that construction on sites should continue. People should obviously exercise sensitivity and common sense and follow social distancing measures. But construction in the open air on those types of sites can continue.”

He added: “I think it’s important that, when we have construction work that is going in a way that can be done safely, in the open air and on new sites, that does continue.

”It’s important that we make sure that construction and manufacturing can continue and that seems to me to be the safest way of ensuring that we can maintain appropriate social distancing rules in a way which ensures that people who cannot work from home continue to do so.”

The comments came after Johnson used a national address yesterday evening to ask the police to enforce a draconian public lockdown, including a ban on gatherings of more than two people.

He said people will only be allowed outside to buy food or medication, exercise alone once a day, or to travel to work if absolutely necessary.

One major contractor admitted: “[The confusion] is making a very difficult decision for construction chief executives even harder.”

The situation leaves both developers and their contractors in a difficult position, with neitherr wanting to be the party to take the decision to shut the site, fearing it will leave them legally liable for whatever costs or delays are incurred. 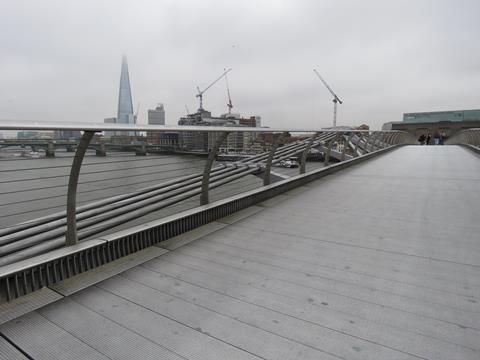 While London has emptied of office workers, construction sites have still been working

It is understoood that some firms are drawing up plans to pull workers off jobs, adding the issue of whether sites stay open is now a matter of conscience. There is also anecdotal evidence of individual builds stopping.

A director at one senior firm with a string of schemes in the UK said: “We have to do what is right by our staff. This is a moral issue. We all have to be able to look at ourselves in the mirror when this is over and be satisfied with our actions.”

Government guidelines on social distancing say people should be at least 2m apart but the director added: “It is becoming increasingly hard to be able to maintain the government guidance on projects with 200-300 people on site.”

A note produced by the CLC on site operating procedures admitted: “There will be situations where it is not possible or safe for workers to distance themselves from each other by 2m.”

The 2m rule has been branded unenforceable for construction even before workers get to site – given so many use public transport, especially in London, to get to jobs. One executive said: “The workers still need to get to work on tubes and the 2m rule is impossible on public transport. Likewise, I’m not sure how you maintain the 2m rule on a site.”

Simon Tolson, a senior partner at law firm Fenwick Elliott, said Johnson’s message was that “essential work does not cover working on a construction site of non-critical purpose”.

Read all our coronavirus coverage here.

What do you think? Email our newsdesk at elizabeth.hopkirk@bdonline.co.uk