A Kingspan director has denied that the insulation giant had a close relationship with government which it wanted to maintain after the Grenfell fire.

Thursday’s hearing of the Grenfell Inquiry was shown an internal email sent three months after the 2017 blaze which said staff at the firm wanted to “remain friends” with the Department for Communities and Local Government (DCLG), the predecessor of MHCLG. 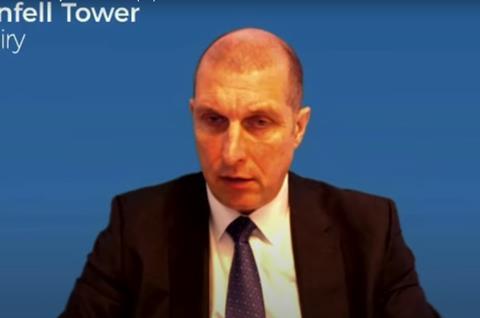 The email said that senior staff at the firm were considering a “friendly tap on the shoulder” in the aftermath of the fire amid concerns that the government would ban combustible materials, including insulation, on high-rise buildings.

Kingspan’s K15 insulation was one of the insulation materials found to be included in Grenfell Tower’s cladding system after the fire, although it was never specified for the refurbishment project.

In the September 2017 email, the firm’s marketing director John Garbutt discussed the option of sending a letter to DCLG pointing out that a type of honeycomb cladding, which it said the government could be “tempted” to endorse as a replacement for existing cladding on buildings, had failed a fire test.

Garbutt said in the email: “We need to agree whether the letter should be from external lawyers, internal lawyers, a trade association, or a friendly tap on the shoulder by email from me or Adrian [Pargeter, Kingspan’s director of technical, marketing and regulatory affairs].”

The email added: “I have a feeling that the latter is the best approach as we want to remain ‘friends’ with DCLG.”

Asked by counsel to the inquiry Richard Millett QC whose shoulder would “be the recipient of this proposed friendly tap”, Kingspan’s former UK and Ireland managing director Richard Burnley said from his recollection that it would be someone from DCLG.

Millett asked: “Who were these friends? Who was the friendly shoulder?”

Burnley replied: “I think what he’s meaning is we weren’t trying to be obstructive, we were trying to provide them with information.”

He added that his understanding was that Kingspan did not have a strong relationship with DCLG, although he admitted that “people probably knew people”.

The inquiry has already heard that Kingspan hired PR firm Portland Communications following the Grenfell fire, which claimed 72 lives, as part of a lobbying campaign to persuade the government not to ban combustible cladding products on high-rise buildings.

The strategy aimed to ensure that Kingspan’s combustible K15 insulation could continue to be sold on the market alongside rival non-combustible brands.

As part of the campaign, the firm attempted to use failed tests of non-combustible insulation products to demonstrate to a select committee investigating the dangers of different types of cladding that non-combustible products could also be dangerous.

An internal email shown to the hearing read: “I think we need to ‘show up’ these MPs and show them that without technical competency they’ll end up making the wrong decision.”

Although a May 2018 test which Kingspan had rigged to ensure a fail had accidentally passed, a second test in July of that year on a Vitracore G2 material which had achieved a “limited combustibility” rating had produced the desired result of a fail.

Burnley then showed the results of the second test to the housing, communities and local government select committee as evidence that non-combustible cladding could be dangerous but he made no mention of the May test, despite being fully aware that it had been carried out and had passed.

In a letter sent to the select committee chair, Clive Betts, in January this year, current Kingspan managing director for UK and Ireland Ralph Mannion said that the May test had not been shared with the committee because it was “not relevant as it did not illustrate the public safety point that Kingspan was seeking to explain”.

Millett asked Burnley: “Was it not relevant for the select committee to know about the May test precisely because it undermined the public safety point Kingspan were seeking to explain?”

Burnley replied: “No, I don’t agree with that.”

Asked if the truth was that the May test had been concealed because it “seriously undermined” Kingspan’s case that combustible materials should not be banned, Burnley said that he did not believe that to be the case and denied that the firm had set out to mislead the committee.

The inquiry was then shown email exchanges between senior Kingspan staff discussing the choice of Burnley as the firm’s representative to give evidence to the committee in summer 2018.

Technical director Tony Ryan emailed Garbutt saying the firm was looking for someone who was “technically excellent” and able to “demonstrate their knowledge of testing in a way that portrays Kingspan as absolute leaders in fire testing”.

Garbutt replied suggesting Burnley as “he knows enough, but not too much, which is helpful”.

Millett asked Burnley, who at this point had worked for the firm for only four years, if he had been surprised to be asked to give evidence to the committee. Burnley replied: “I was a little, yes.”

Millett then asked: “Would it be fair – and I’m sorry to be blunt about this, Mr Burnley, but let’s look at it fairly and squarely – to say that you were set up by others at Kingspan as Kingspan’s useful idiot, who knew the case message, could speak very articulately to it, but not the fact that it rested on flimsy evidence?”

Burnley replied: “I don’t believe that’s the case, no. If that had been the case then I wouldn’t have accepted the invitation to go.”

The inquiry has already heard that the version of Kingspan’s K15 insulation which was on the market - and which was found after the fire to have been included in the cladding system of the Grenfell Tower refurb - was also different to what had been tested.

Kingspan had changed the chemical composition of the insulation in 2006, a year after the successful 2005 fire test which was then used in the product’s marketing literature for nearly 15 years before the test report was withdrawn in October last year.

A 2007 fire test of the newer version of K15 had turned a laboratory into a “raging inferno” which had to be extinguished before the end of the test out of fears that it would endanger the laboratory.

The first phase of the inquiry found that the insulation products in the tower’s cladding system, which also included Celotex’s RS5000, “more likely than not” contributed to the rapid spread of flames up the side of the building.

Yesterday’s hearing was the last in module two of the inquiry which has been looking at how the materials used in the refurbishment of Grenfell were tested, marketed and sold.

The focus of the inquiry will now shift on to the social housing management of the tower.