Grenfell Inquiry to be brought to the stage

The Grenfell Tower inquiry is to be turned into a piece of verbatim theatre by the same team that dramatised the Stephen Lawrence inquiry.

Richard Norton-Taylor, a playwright and former security editor at the Guardian, and the theatre director Nicolas Kent have collaborated on the project which will be performed close to the scene of the disaster. 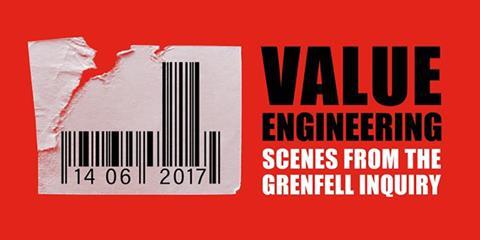 Grenfell: Value Engineering – Scenes from the Inquiry will interrogate why the fire happened following the 2015-16 refurbishment and who should be held responsible for the deaths of 72 people.

The play will use only verbatim evidence given by witnesses to the current inquiry chaired by Martin Moore-Bick into the events and decisions leading up to the fire on June 14, 2017.

The often dramatic cross-examination by barristers of the architects, contractors, consultants, product manufacturers and testing house staff has been covered in detail by Building Design.

Kent, who for nearly 30 years was artistic director of the Tricycle Theatre where his productions included verbatim dramatisations of the Scott inquiry into arms to Iraq, the Hutton inquiry into David Kelly’s death and the Stephen Lawrence inquiry into the aspiring architect’s murder, said: “The Grenfell Tower Inquiry is vitally important in getting to the truth and holding to account those who were responsible for the disastrous refurbishment of the tower.”

Norton-Taylor, who won an Olivier Award in 2005, has collaborated with Kent on eight verbatim plays based on trials and public inquiries.

He said: “What has emerged from the inquiry is an extraordinary catalogue of greed, fraud, cheating and lying, secret fixing of fire tests on their products, subtle layers of corruption and racism, fatal cost-cutting, casual indifference, and practices which one young company executive called ‘completely unethical’ and which some even joked about.”

It exposed fatal consequences of austerity and deregulation, he said, with the switch to cheaper cladding saving just £300,000 on the £10m refurbishment.

“The evidence in the Grenfell Inquiry reflects many of the problems deeply embedded in contemporary British society,” he said.

“I believe that presenting it to a theatre audience will lead to a wider understanding of the story behind a fire whose repercussions will be felt for many years.”

>> Also read: All our Building Safety Bill coverage in one place

The play will be staged from October 13 to November 13 at the Tabernacle community theatre in Notting Hill where tickets for the neighbouring Grenfell community will start at £2. It will then move to the Birmingham Rep from November 16-20, with a cut of ticket sales being split between the Grenfell Foundation and Birmingham cladding action groups.

A schools education programme will run alongside the production.

Architecture in the spotlight

An exhibition by Turner Prize–shortlisted Forensic Architecture has opened at the Whitworth as part of the Manchester International Festival.

Cloud Studies (July 2 to October 17) ”draws together some of the agency’s previous investigations around the world to expose how states and corporations weaponise the air we breathe to suppress civilian protest, to maintain and defend violent border regimes, and empower extractive industry”.

A central focus is the first phase of a new investigation on environmental racism in Louisiana in an area known as ‘Cancer Alley’ where petrochemical production facilities are sited alongside black communities, forcing them to breathe some of the most toxic air in the United States.

Meanwhile the Royal Academy in London has announced an exhibition this autumn on the renowned Swiss-French photographer Hélène Binet who has documented the work of architects including Le Corbusier, Zaha Hadid, Nicholas Hawksmoor, Daniel Libeskind, Jørn Utzon and Peter Zumthor, among many others.

Light Lines: The Architectural Photographs of Hélène Binet opens in October and will span her career, showcasing around 90 images of more than 20 projects by 12 architects.