Zaha Hadid Architects’ designs for a timber stadium for Forest Green Rovers have finally been approved.

The scheme is part of a £100m Eco Park development close to the M5 in Gloucestershire masterminded by the League Two side’s chairman Dale Vince. As well as the stadium, it will include parking and two pitches, one of which will be multi-purpose and available to the local community.

The plans will see the club, which was founded in 1889 and has been described by Fifa as the world’s greenest, leave its home at the New Lawn, in Nailsworth near Stroud, and move to Eastington, next to J13 of the M5.

Opponents of the plan were worried about noise, traffic and the impact on the local community, but the council’s planning committee voted six to four in favour of the scheme.

Vince, who owns the green electricity company Ecotricity, said the right decision had finally been made and that, if construction were to begin soon, the stadium could be completed within three years. 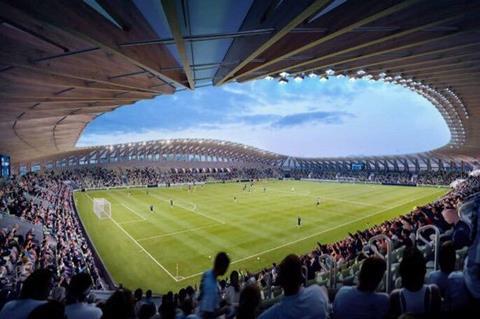 How the new stadium will look when complete