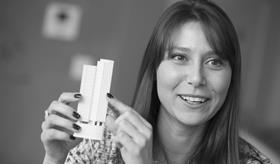 Two architecture students have been awarded bursaries worth £2,000 each in memory of a promising architect who died after being hit by a coach as she cycled to work.

LOM set up the annual bursary last year to fund a student who wanted to travel as part of their education after Karla Roman, who worked for the firm, died in February 2017.

Describing Roman as a much-loved colleague, LOM said her passion for travel and dedication to the profession had inspired the bursary and since two applications particularly stood out this year it had been agreed to award the £2,000 bursary to both.

Eleanor Hyde is in her first year at Bath University and plans to travel to Japan.

She said she wanted to travel and study religious architecture of different cultures and the contrast between Tokyo’s technological landscape and the more spiritual settlements of Nikko and Kyoto.

The second awardee is Farid Abdulla who is studying for his part II at the Manchester School of Architecture.

Abdulla said he would spend some time at the Politecnico di Milano, Italy’s largest technical university, learning about the delivery of social housing, among other things.

Applications for next year’s bursary open in September.