A senior government official failed to clarify “confusing” Building Regulations in the years before Grenfell despite telling a group of cladding experts “there is going to be a major fire”, the inquiry has heard.

Brian Martin, the civil servant responsible for official guidance on fire safety, is alleged to have made the comments at a July 2014 meeting with the Centre for Window and Cladding Technology (CWCT), an industry body which provides guidance on facades, to discuss concerns over an ambiguous passage in the government’s official fire safety guidance.

The passage appeared to imply that the requirement for the standard of “limited combustibility” only applied to “filler” materials. This was misunderstood by some in the industry to refer only to materials used to fill gaps between insulation panels rather than the core of cladding panels.

Inquiry to the counsel Richard Millett QC said on Tuesday that there had been a “10-year legacy of misunderstanding by the UK construction industry” because of the “poorly drafted” clause in the regulations. 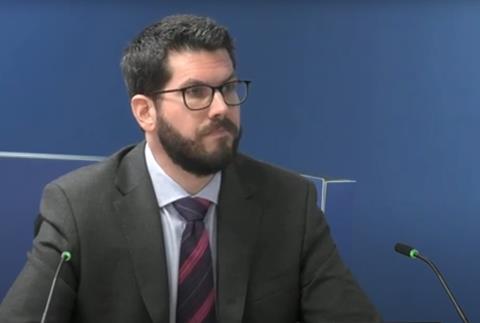 David Metcalfe, director of the Centre for Window and Cladding Technology (CWCT), giving evidence to the inquiry

Adding to the confusion was the ‘Class 0’ standard for fire safety which could be granted to cladding panels with combustible cores, including ACM panels used on Grenfell, because it focused on the surface of materials.

CWCT director David Metcalfe told yesterday’s hearing that concerns over ACM were first raised following a series of major fires in the Middle East blamed on the panels.

The meeting also discussed concerns over poor workmanship with the installation of cavity barriers, which are used to stop fire spreading within a facade system.

Kingspan product manager David Cookson, who attended the meeting, said in his witness statement: “One thing that does stand out in my mind from the CWCT meeting is that when Brian Martin left the room, he said something along the lines of ‘there is going to be a major fire’.”

The CWCT’s meeting was also attended by Sarah Colwell, from testing body the Building Research Establishment. Colwell suggested that an FAQ be added to the building regulations to clarify confusion over the term “filler”.

Metcalfe told Millett that Colwell had said she would discuss the issue with Martin to “agree a way forward”.

Metcalfe said he expected this to be done “within weeks”, but a meeting between Colwell and Martin was not arranged until September, two months later.

But despite the inquiry hearing that the FAQ had been drafted at the meeting, Metcalfe said it had still not been provided to the CWCT in March the following year.

Colwell had then replied to an email from Metcalfe, in which he had asked for an update, saying that the clarification had been “drafted and revisited” and would “hopefully be closed out soon”.

Metcalfe said he had then chased Colwell for the next eight months but that Colwell had failed to respond to five emails, several phone calls and voicemails.

The CWCT eventually published guidance to its members in April 2017, two months before the Grenfell fire and a year after the installation of ACM panels on the tower had been completed, saying that all components of a cladding system should be of ‘limited combustibility’.

Asked by Millett if this clarification had been “desperately needed by the industry”, Metcalfe replied: “Yes.”

But Metcalfe admitted that the potential danger of combustible materials installed on buildings before the guidance was issued had not been considered.

Millett asked: “Was there a sense in which the historical legacy of this poorly drafted clause was to some extent an elephant in the room?”

Metcalfe replied: “To be honest I don’t think it was, because that simply wasn’t what we were focusing on.”

“No one thought to… ask themselves the question, well… there’s a 10-year legacy of misunderstanding by the UK construction industry, what are the life safety implications of that?” asked Millett.