The government official responsible for fire safety in buildings had not questioned flawed fire ratings for cladding before the Grenfell Tower disaster, the inquiry into the 2017 blaze was told yesterday.

Brian Martin said he did not think he had “considered” that the Class 0 rating, which is based on how fire behaves indoors, might have been an “inappropriate” way to judge the fire safety of external walls.

The UK Class 0 rating was used in government guidance to mark a cladding system as safe until December 2018, when it was removed in the wake of the fire at Grenfell Tower. 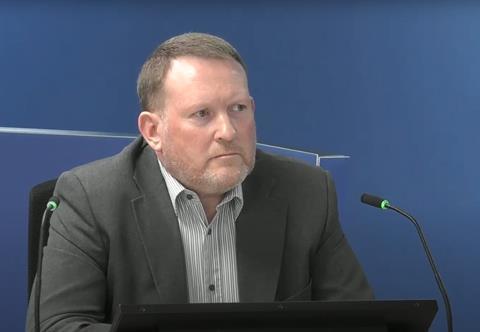 But the specification is based on two testing regimes for internal walls and ceilings. It also focused on how fire spreads across the surface of materials, meaning that products which contained combustible cores –such as the highly combustible ACM cladding used on Grenfell Tower –were sometimes able to obtain the rating.

Martin, who had responsibility for fire safety guidance at the Department for Communities and Local Government from 2008 to 2017 despite having no formal training in the field, was questioned at yesterday’s hearing about the government’s use of Class 0.

Counsel to the Inquiry Richard Millett QC asked him: “Did it ever occur to you… that [Class 0] are inapposite tests for an external wall, given their origins?”

Martin replied: “I don’t think I had considered that before Grenfell Tower.”

He was also asked about the suitability of the Euroclass B rating, which was used alongside Class 0 to assess the safety of cladding from 2002. The European standard, although tougher to achieve than Class 0, was largely based on a ”room corner test” - in this case a burning waste paper bin in the corner of a room.

Millett asked Martin whether he  ever had “cause to consider whether that test [the room corner test] was useful for assessing fire behaviour in circumstances far removed from that scenario, namely on the external face of a high−rise building?”

Martin said it was “generically… a subject that I was aware of, not specifically in relation to external walls”. He added: “The tests get used in a wide range of applications, many of which are not directly comparable to an internal wall lining.”

Pressed on whether he had considered whether Euroclass B was an appropriate test for external walls, he said: “I don’t think I did”.

Martin was also questioned about the government’s response to the 1999 Garnock Court fire in Irvine, Scotland, which destroyed flats across nine floors of a 14-storey residential block after the building’s combustible cladding caught fire. Martin was a member of a team of researchers from the Building Research Establishment (BRE) investigating the fire.

He co-authored a report for North Ayrshire council which said that, although the cladding material used on the building “should have been Class 0, we have reservations about its current performance”.

It added: ”We suggest that non-combustible materials are chosen wherever possible.”

This was followed by a December 1999 report on the dangers of cladding fires by a group of MPs which called for the Class 0 rating to be replaced by a requirement that cladding systems be either “entirely non-combustible” or pass a new BRE fire test.

However, the government did not follow the recommendation in an April 2000 revision of building fire safety guidance and chose to keep the Class 0 rating.

In August of that year, the BRE delivered a second report on the Garnock Court fire which was largely identical to the first, except that the advice on using non-combustible materials had been removed. All references to Class 0 in the report had also been removed.

Asked if the references to Class 0 had been removed “at the request of the department”, Martin said: “Not that I’m aware of.”

Millett then asked: “Do you accept that the only explanation for those excisions is that somebody was told to excise them in order to make the BRE’s report to government in 2000 about Garnock Court consistent with the government’s earlier decision to reject the select committee’s recommendation?”

Martin replied: “I don’t know for sure because I wouldn’t have been involved in that conversation. But I find that hard to believe.”

But asked if he could provide an explanation for why the report had been changed, he admitted: “It does seem odd. I can’t think of a good reason for it.”

Martin was also asked why the Class 0 rating had not been looked at again until a 2006 revision of fire safety guidance. He said: “I think we just considered it as water under the bridge.

“It sounds really glib, and I’m sorry, but that’s - those were decisions that had been made and so, unless there was a driver to revisit them, it didn’t come up.”