A series of dramatic failed fire tests on aliminimum composite material (ACM) cladding before the Grenfell tower fire had “just got forgotten”, a senior civil servant has told the inquiry into the disaster.

The inquiry has already heard that one of the 2001 tests had revealed the danger of ACM cladding, the type which was installed on Grenfell tower and has been blamed for the rapid spread of flame in the fire which killed 72 people on 14 June 2017.

Technicians at the Building Research Establishment (BRE) had set light to a 9m section of wall covered in the material, resulting in 65ft high flames - twice the height of the test rig - just five minutes into the 30-minute test. The rig then had to be extinguished because of safety concerns.

BRE scientist Sarah Colwell has previously told the inquiry that experts who witnessed the test were “shocked” by the results, which she described as “catastrophic”. 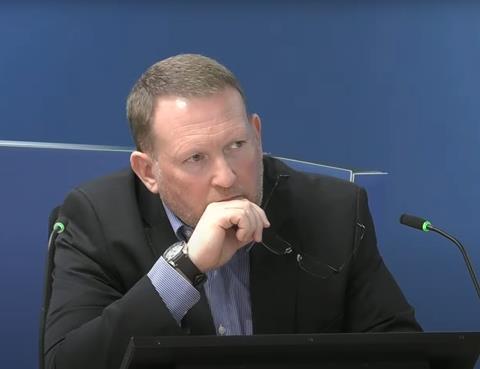 This was of major significance as the panels had passed the UK fire rating Class 0, which meant they could be used to clad external walls on buildings above 18m.

But while the BRE’s report on the tests to the government said that ACM had been “one of the worst performing products”, it simply concluded that the issue of the material’s compliance with Class 0 “may require further consideration”.

Martin had been employed by the BRE at the time and was one of three senior fire safety experts working on the testing project.

He also worked two to three days a week in the housing department - now known as the Department of Levelling Up, Communities and Local Government - as an advisor on a review of fire safety in buildings.

He joined the department full time in 2008 as the civil servant responsible for Approved Document B, the part of building regulations which deals with fire safety.

Yesterday, he was asked by counsel to the inquiry Richard Millett QC why the BRE report’s warnings about the test results had been “expressed in such feeble terms”.

Martin said: “I don’t know”, though he admitted that it “clearly needed to be raised in stronger terms”.

“One gets the slight sense, Mr Martin, that there’s some sort of problem about coming clean with government and telling them that class 0 was a problem… and it’s dangerous, because once some products which achieve class 0 are tested to full scale, they are dangerous, spectacularly so. That’s the sense one gets. Is there anything in that?” Millett asked.

“No. I don’t believe anyone at the department or anyone at BRE would have deliberately concealed this, and… I can’t think of any reason why either group of people would have wanted to do so”, Martin replied.

Asked if he had checked whether the government planned to look into the results further, Martin said he did not remember “giving it any consideration at the time”.

The inquiry has already heard that proposed changes to Approved Document B under the coalition government had been hampered by a drive for deregulation, but Millett pointed out that at the time of the BRE’s report this had been “a decade off into the future”.

He asked: “What possible reason was there for government, in whose offices you sat half the week, not acting on the advice there, oblique though it may have been?”

“At that time, I don’t think there would have been any reason not to act on it, and again, this sounds awful, but I think it just got missed”, Martin said. “I don’t understand how a result of that magnitude didn’t get more prominence at the time, and so I don’t think anybody that I was talking to recognised the need to do more.”

Asked if he had forgotten about the tests by the time of the Grenfell tower fire, Martin said he had not and had tried to track down the reports, which were eventually found by BRE manager Debbie Smith and shared with him “several months after the fire”.

But the test results, which had been regarded as commercially confidential, were not disclosed to the inquiry until they were revealed by the BBC in September last year.

Asked why the data had until then been “sat on”, Martin said: “Tragically, I think it just got forgotten and fell between the gaps.”

“Mr Martin, are you able to give us an assurance that you and Anthony Burd [another civil servant] did not sit on this data or your knowledge of it for the full nine years that you were a full −time civil servant, hoping and praying fervently that it would never see the light of day?” Millett asked.

“I can assure you that neither of us would have done that”, Martin replied.

The inquiry has already heard that the government had been lobbied by various industries in the years after the tests to retain Class 0, as introducing tougher standards would push many products out of the market.

Martin and Colwell had worked on new pass/fail criteria for products in the aftermath of the tests. Although a passage in the first draft of the criteria had referred to weaknesses in the tests needed to obtain ‘Class 0’, a second draft had omitted the passage.

“Was one of the reasons why these words disappeared from here the need to preserve class 0 to keep the UK market sweet?” Millett asked.