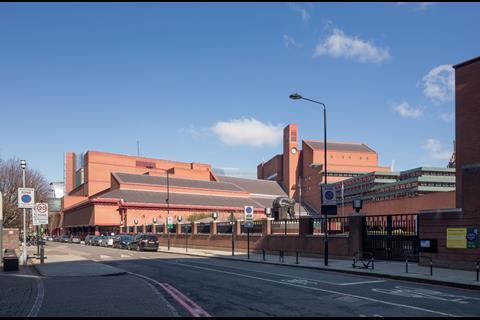 Proposed view as seen at junction of Ossulston Street 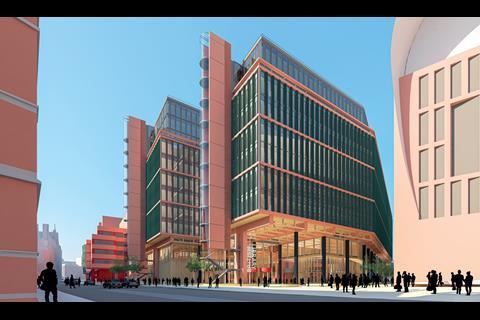 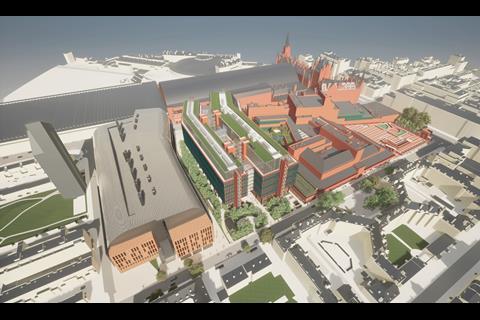 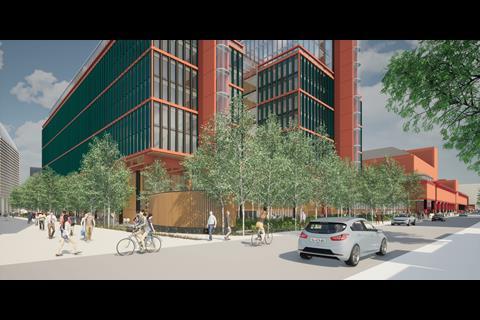 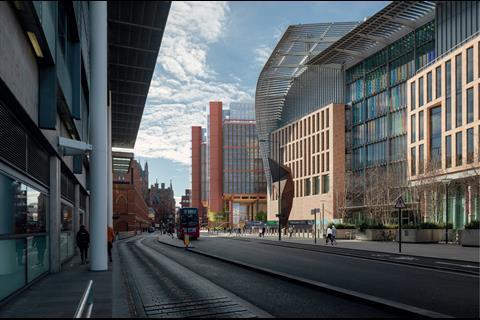 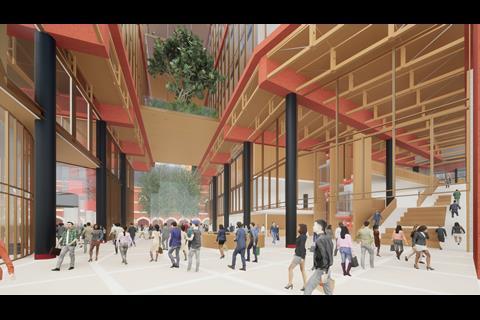 It also emerged that the schedule has slipped slightly because of the complexity of the project. A planning application was originally due to be submitted in May but the developer is now saying this will happen later in the summer. A spokesman said the plans were still broadly on track.

When the plans were first unveiled in February they sparked anger among architects and historians, with Patrick Lynch dubbing the designs a “third-rate wedge of nothing”.

The revised proposals – currently out for consultation – still require the demolition of buildings to the north of the library, including the 2007 British Library Centre for Conservation (BLCC) designed by Long & Kentish, which caused howls of protest. It has been earmarked as a temporary construction compound for the mothballed Crossrail 2 project.

The developers, a JV between developers Stanhope and Mitsui Fudosan, have secured the site by agreeing a deal with Transport for London which will see them carry out the work to build 5,000sq m of shafts and passageways beneath RSHP’s extension in case the mothballed railway is revived.

More detail on the RSHP scheme emerged, including the fact that it will be funded through a 73,000sq m commercial building aimed at life sciences tenants and other businesses wanting proximity to the area’s emerging “knowledge quarter”. As well as PLP and HOK’s Francis Crick Institute, AHMM is designing a pharmaceutical building nearby.

The project also includes 10,000sq m of new library accommodation, new entrances to the library on Midland Road and Ossulston Street and a publicly accessible foyer area, new routes through the previously largely inaccessible site, a new headquarters for the Alan Turing Institute and a new home for a temporary community garden.

RSHP has pulled back the proposed extension from the western edge of the site, which it said would reduce the impact to the residents of Somers Town, Ossulston Street and Levita House and create more open space. The building has also moved closer to Midland Road and the upper levels of the extension have been set back to reduce the impact of overshadowing on local homes. 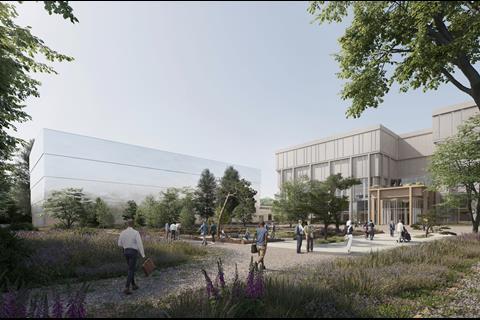 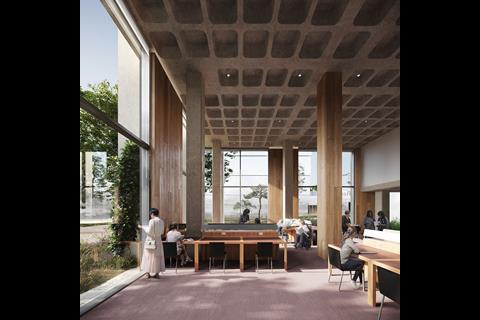 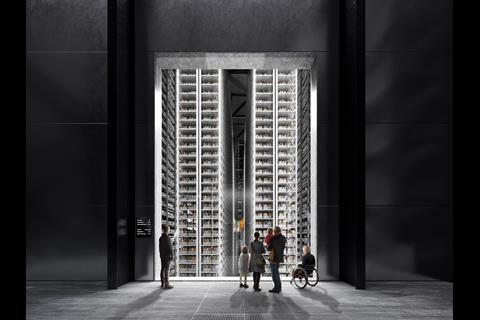 Meanwhile the British Library is also progressing plans at several of its other sites around the country. Carmody Groarke submitted plans to Leeds council at the end of April for a major redevelopment of its Boston Spa storage facility in West Yorkshire.

This will see the construction of a new state-of-the-art storage facility, the refurbishment of some buildings and removal of others to create a more publicly accessible education facility.

The 44-acre campus at Boston Spa, formerly a Second World War munitions factory, is home to more than three quarters of the library’s collection of over 170 million items. In the last ten years around 7 million physical items have been added to the library’s archives; requiring about 8km of new shelving annually. By the end of this decade the current storage facilities are projected to be full.

Andy Groarke, director of Carmody Groarke, said: “The British Library’s masterplan at Boston Spa will increase the capacity and quality of storage for the national collection, create a better place for people to work and vastly improve the long-term environmental sustainability of the campus.

“We were inspired by the complex post-industrial history of the site as well as how the library have evolved their archive buildings at Boston Spa over the past five decades, to design the next generation of buildings. A new fully automated, net-zero-carbon archive will accommodate more than 225 kilometres of collection expansion, while an extensive renovation of the Urquhart Building will upgrade the 1970s brutalist concrete architecture to contemporary environmental standards for 550 library staff.

“We are delighted that the project will enable the British Library to give the campus a more public-facing presence and to provide long-term care for the national collection in a far more sustainable way.”

The library and council are also working with the Commercial Estates Group to explore options for bringing Leeds’ famous Temple Works building into public use to create a “British Library of the North”.