Practice expected to move into first permanent US home this autumn

Roger Stirk Harbour & Partners is preparing to open its first office in the US later this year, its fourth overseas outpost after Paris, Shanghai and Sydney.

The practice, which designed the 80-storey 3 World Trade Center in New York that replaced a hotel destroyed in the 11 September terrorist attacks 20 years ago, is currently finalising its plans for a New York office ahead of the opening which is expected this autumn. 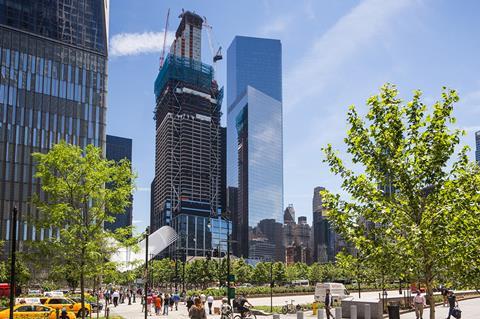 The firm is currently sorting out visa applications for staff and is close to signing a lease on a property in the financial capital of the US.

In a statement, the firm told Building Design: “The reason for opening the office is that we want to be on the ground to support our clients.”

RSHP has several ongoing jobs in the US including a residential scheme in New York called No 33 Park Row, a 23-storey block across from City Hall Park in Manhattan and, further afield, the Horse Soldier Bourbon Distillery in Kentucky and another residential project, this time in Philadelphia.

The news comes as the firm admitted that the covid-19 pandemic forced it to axe 21 jobs in March, an 11% cut that leaves it with 170 staff.

It added that the move had been made despite it accessing the government’s Coronavirus Job Retention Scheme (CJRS) – although it declined to say how much it had been given.

“We used the government’s CJRS as it was intended to be used,” the practice said. “This enabled us to keep staff employed and ultimately to reduce the number of redundancies that would have been made had the scheme not been in place during the difficult early phase of the pandemic.”

It had originally warned 30 jobs were at threat.

Meanwhile, in its latest accounts, which have now been filed at Companies House, the firm said turnover for the 18 months to December 2019 was £34m compared to the £30m for the 12 months to June 2018.

It said its accounting period would in future now end in December and admitted the 18 months to December 2019 had been “challenging” and that like-for-like income had fallen.

But the firm, whose 2020 accounts are currently being audited, said turnover had risen last year, adding that it expected the improvement to continue into 2021.