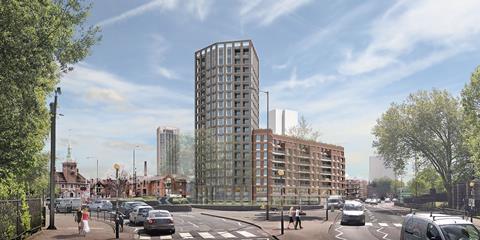 Lifschutz Davidson Sandilands is set to submit a planning application for an £80m mixed-use scheme in Canada Water, south-east London.

The 18-storey project, known as the Brooklyn, will contain 150 homes and 25,000sq ft of office space on a site called St Olav’s Court besides the Rotherhithe Tunnel.

The scheme is set to progress after developer Southern Grove exchanged on the site this week. It will now seek a housing association as a partner to ensure as much of the housing as possible is “affordable”.

A planning application will be submitted by the end of October, said a spokesman.

The scheme will be located close to British Land’s 53-acre redevelopment site south-east of Canada Water station. Planning was granted by Southwark council in October for that £3.3bn project, which includes Surrey Quays shopping centre.

The council hopes it will become a new “town centre” with 3,000 homes and retail, office and leisure space.