Kingspan employee responsible for testing was a ‘functioning drug addict’

Kingspan had threatened the National House Building Council (NHBC) with legal action on the grounds of defamation after the organisation discovered that its K15 insulation product was not compliant with building regulations, the Grenfell Inquiry has been told.

The NHBC, the country’s largest building control body, had warned Kingspan that it would have to start informing projects that had used K15 that it was not compliant. Kingspan responded by instructing lawyers to send a letter in February 2015 to the NHBC saying it would seek a legal injunction under the Defamation Act 2013.

The letter read: “It is our client’s position that neither [the] NHBC or the market as a whole will suffer any detriment as a result of our client being given a further sensible period in which to demonstrate compliance.”

It gave the NHBC three days to confirm that no steps would be taken which would damage Kingspan’s reputation. The letter stated if the deadline was missed Kingspan would be “left with no alternative but to protect its position by applying to the court for an injunction preventing the NHBC from making the statements you propose in relation to the K15 boards”. 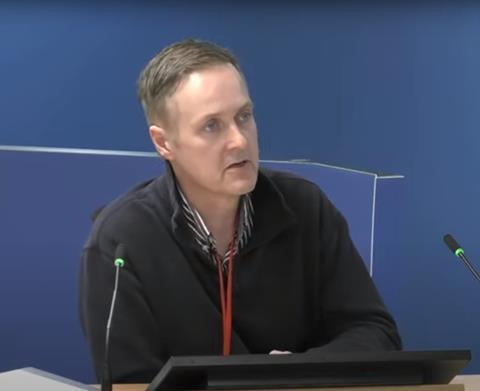 Asked by inquiry barrister Kate Grange QC if Kingspan’s lawyers were right to say in the letter there was “no justification” for the NHBC’s warning of potential non-compliance, Ivor Meredith, a former technical project manager at the firm who spent more than 16 years at the company, replied: “This is a very heavy-handed approach, isn’t it? I wouldn’t say that their position was unjustifiable.”

In 2016, the NHBC published guidance confirming that K15 could in fact be used on buildings above 18m.

The insulation also received certification for use on high rise buildings by the Local Authority Building Control, which wrongly said that K15 held the status of limited combustibility needed for use above 18m.

Meredith agreed with Grange’s suggestion that the stamp of approval was “of enormous benefit to Kingspan commercially”, with the inquiry shown an email from technical manager Philip Heath in which he exclaims: “GREAT NEWS!”

The inquiry also heard how Meredith, who was responsible for proving the firm’s products were safe to use on tall buildings, had a serious drug problem.

It emerged he had been “under enormous pressure” to justify the use of K15 on buildings taller than 18m after the NHBC and Wintech, a facade engineering firm, had questioned Kingspan’s information on K15.

Meredith, who started working for Kingspan in 1999, was fired for gross misconduct in 2015 for falling asleep at his desk and driving a company car against management’s instruction.

From November 2005 to January 2015 Meredith held the role of technical project leader and was responsible for testing and certification for Kingspan’s Kooltherm K15 insulation, which was installed on the 67m tall Grenfell Tower despite not being safe for use on buildings above 18m.

The inquiry has already heard how Kingspan had been selling K15 for over 14 years for use on high rise buildings on the basis of a 2005 test of an earlier version of the product dubbed ‘old technology’ K15.

In 2006, the firm had changed the product to a newer version called ‘new technology’ K15 which had turned a December 2007 testing rig into a “raging inferno” that had to be extinguished out of fears it would endanger the testing laboratory.

Kingspan only withdrew the test report for the newer product last month after sending a letter to the Building Research Establishment claiming the firm was “now of the view” that the product being sold was different to what had been tested.

But Meredith told the inquiry on Monday that it had been “common knowledge” at the firm from 2006 onwards that the test report used to market the newer K15 as safe was from the older K15.

Meredith, who described himself as a “functioning addict”, said his drug problems had escalated in his last couple of years at the firm resulting in his firing for gross misconduct in August 2015

The hearing was shown minutes from an appeal hearing brought by Meredith after he was fired in which Meredith said he had been “put under excessive stress” and was “physically in a mess”.

The second module of the inquiry is focusing on the role of the refurbishment’s materials in the 2017 fire at Grenfell tower, which killed 72 people.

‘I am physically in a mess’: Extract from Tuesday’s Grenfell Inquiry

Inquiry barrister Kate Grange QC cross-examined Ivor Meredith, former technical project manager at Kingspan, about his appeal after he was fired for gross misconduct in 2015.

She begins by asking him about minutes of that appeal on September 3 with Kingspan’s managing director Richard Burnley and Elaine Gale, an HR advisor.

Meredith agrees he cannot be confident of the accuracy of his statements as the time “as it was a highly emotional time and you were operating with minimal sleep and under extreme stress”.

Having established that, Grange quotes from the minutes where Meredith says: “I don’t really blame Kingspan, yes it’s been a turbulent time and I have been put under excessive stress. I am coming here with my hat held out to you really, because I am physically in a mess, I’ve… it’s been known to the business I think that I have always had a drug problem, obviously there were a number of times that people have joked with me when I have been going to Amsterdam [etc] … that sort of thing…”

Meredith: The thing is that everybody in the business – it just seemed a very busy time and there was a lot going on. I think I handled – sometimes outwardly I handled it quite effectively, so … I don’t know, perhaps they should have noticed but, you know, I can’t blame them if they didn’t.

Grange: Yes. Then if we go on to p5 of these notes… Elaine Gale says to you: “As I understand it your role, or the work that you do has been fairly critical in terms of Kingspan’s product being approved, in terms of fire safety?” Then you say this: “Yes I would say that I have been put in a situation where I have had to maintain performance that perhaps our products don’t deserve. I have the ability to show that our products can be used in areas where you would normally require material which would be non-combustible; from a critical lifesaver perspective. I have performed in a number of tests in 2005, Kingspan changed the technology of our foam and we couldn’t repeat those tests. We were outed by a consultant who we then had to fabricate a story to [say] that the product still said what it did [on] the tin. Although I bucked at that point and said to my manager, at the time, that we are stretching the truth here and what we are going into an area … where we cannot support the performance of the product. I wasn’t the senior person there, we produced documentation and we inferred to the industry that our product could do something that potentially it couldn’t.” Do you see that there?

Grange: You’re talking about the K15 product there, aren’t you?

Grange: And you’re talking about the fact you have done the BS 8414 tests in 2004, 2005, and then there was the change in technology and you couldn’t repeat those tests; that’s right, isn’t it?

Meredith: They weren’t initially repeated, no. Yeah. So, yes.