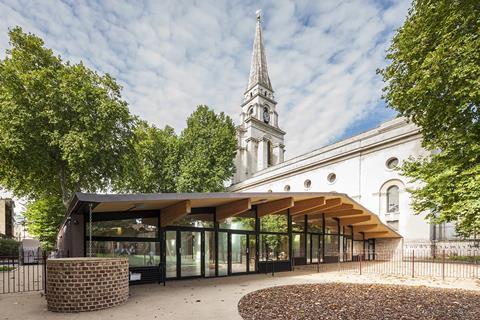 A church court has ruled that Scabal Architects’ £1.5m Spitalfields nursery school must be torn down after heritage campaigners proved it was built unlawfully.

The decision, made on appeal, is the denouement of a long and bitter battle between the school authorities and a group of local protestors.

The judges gave the school until 2029 to find a new home for the facility, though the opponents haven’t ruled out trying to force the issue sooner than that.

The single-storey nursery and community centre was built in the graveyard of Hawksmoor’s grade I-listed Christ Church Spitalfields in 2013 as an extension for a Victorian primary school on Brick Lane.

Known as the Garden Building, it replaced a temporary 1970s youth club that had fallen into disrepair and become a magnet for anti-social behaviour. But the legal wrangle meant the nursery could not be occupied for months after it was completed.

The Court of Arches – a diocesan appeal court that heard the case because it relates to church land – found the previous court did not have the power to grant a “confirmatory faculty” allowing the building to stay. It also said the court had been wrong to say that the protestors, Spitalfields Open Space Ltd (SOS), did not have sufficient interest to bring the case.

It accused the rector of making mistaken and misleading statements about the fact the churchyard was consecrated and that building work would involve the disturbance of human remains. It ruled that the building was illegal under ecclesiastical law and that SOS had notified the school governors and others involved in the project long before work began. As a result it made a “restoration order” requiring the demolition of the nursery by February 1, 2029.

Jon Buck of Scabal said: “It makes us feel sad and sick – not for ourselves but for a world that can lead to this.”

Inigo Woolf, chief executive of the Diocese of London Board for Schools, said all parties involved in the building would abide by the ruling.

“That gives the school time to come up with an alternative and in the meantime the school is benefitting from the building, and the object of improving learning for the children has been achieved,” he said.

The next step was to complete the landscaping of the churchyard as the architects had intended, he said: removing railings and gates and planting right up to the Garden Building.

“Tower Hamlets council earmarked money for the gardens but because of the dispute they didn’t want to spend money until they knew what the outcome was,” he told BD.

“We are waiting for the final judgement to be published but the intention is that within 12 months the gardens will be laid out as agreed in the plans.”

The building also serves the community, offering English lessons to the largely Bengali-speaking parents, and is used by the church for Sunday school.

Christine Whaite, a director of SOS and one of the people who fought to save and restore the church from dereliction, said there was still a lot of detail to be ironed out with the court before they were ready to comment on the ruling.

But she said their case centred on the shortage of public open space in Spitalfields and the impact the building had on the setting of the grade I-listed church.

In their judgement, the judges concluded: “This highly unusual litigation arose from a misunderstanding of the relevant law which ought never to have occurred, and from a failure of the respondents to pause their construction programme when the prohibition in the 1884 Act was first identified by the appellants in September 2012. It has been a bitterly fought battle…

“Sadly, it will take time for the wounds to heal on both sides. Nevertheless this court, which is very mindful of the role of all churches as local centres of worship and mission… welcomes what appeared, during the hearing of the appeal, to be the first, if very tentative, steps towards a rapprochement between the parties; and we hope that in due course the quality of the provision and management of the churchyard in which the nursery is currently situated may equal that which we observed within the church itself during our visit.”

The full court ruling has been attached as a pdf file.