Retail landlord Hammerson has submitted a planning application to turn a former Debenhams department store in Leicester into 300 homes for rent, in a project the firm said reflected a “structural shift” in UK high streets.

Hammerson is working with private rented landlord Packaged Living on the deal, which will see 300 homes designed by architect CRTKL built on the site at the Highcross shopping centre in the city.

The firm said the homes would open on to East Bond Street, with the project also delivering public realm improvements and a roof garden for tenants. 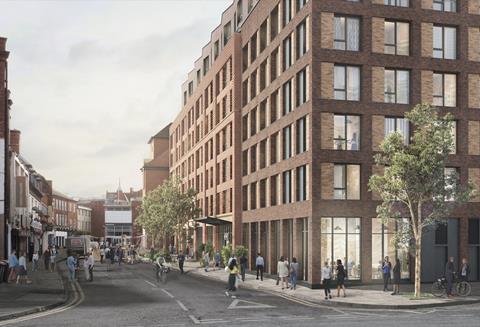 The scheme follows the collapse into liquidation of Debenhams at the end of last year with the loss of 12,000 jobs, having spent six months in administration attempting to find a buyer for the business. Hammerson’s project will also see part of the former Debenhams store turned in to flexible retail units.

Build-to-rent developer Packaged Living, which has a portfolio of 2,000 homes, has been appointed development manager for the scheme, providing investment, development and operational expertise.

Mark Bourgeois, managing director for UK and Ireland at Hammerson, said the scheme would support the shops still operating at the Highcross shopping centre – the rest of which will remain open – and would contribute to the success of Leicester city centre.

He said: “While the structural shift in retail and changing consumer shopping habits have meant that destinations such as Highcross need to adapt their offer and mix of uses, well-connected city centre locations such as this will always be places where people want to be.”

It comes as high streets are under intense pressure from changing shopping patterns, lost income during the pandemic - and a planning relaxation that will allow developers to convert shops into homes without applying for planning consent.