HS2 has scrapped the process to find a contractor to build Grimshaw’s £435m station in the middle of Birmingham because not enough firms were prepared to shoulder the risk to build it.

The railway said it is having to start again for the job at Curzon Street and will be hosting an industry day next Friday to work out what to do next.

It said it would launch a “revised strategy” for the scheme, under which less risk will be handed to the station’s design and build contractor – after admitting contractors had turned their backs on the job.

In a notice posted to the Official Journal, it said: “HS2 have recognised the current market conditions are challenging and the increasing concern regarding risk transfer and wanted to revise our position to provide a better balance and overall outcome.

“The industry day will provide an opportunity to re-engage with the market and outline our revised strategy which we believe will attract a larger number of bidders, reduce risk and thereby produce a more competitive process.”

Procurement for work on the track and overhead system and for tunnel and lineside M&E work has also been paused – although HS2 has not given a reason for this.

Contracts have already been awarded on HS2’s two London stations. A Mace/Dragados team is signed up for Euston which is being designed by Grimshaw Architects working with Arup.

At Old Oak Common in west London, which is being designed by Wilkinson Eyre and WSP, a JV between Balfour Beatty and Vinci is yet to officially sign a deal as rival bidder Bechtel is bringing a legal action against HS2.

The latest delays are announced as the Public Accounts Committee warns that a 2026 opening date for phase one is becoming increasingly unrealistic – and risks causing a Crossrail-style programme blow-out. 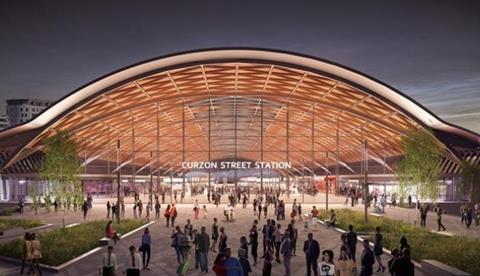 The scheme has been designed by Grimshaw Architects