The former product manager at the firm which manufactured the flammable insulation boards used on Grenfell Tower’s flawed refurbishment has called the actions of his former employer “completely unethical”, the inquiry has heard.

Jonathan Roper, who worked at Celotex between May 2012 and April 2016, told Monday’s hearing how the insulation manufacturer deliberately exploited “ignorance” within the construction industry about fire testing regimes to sell its combustible RS5000 product for use on high-rise buildings. 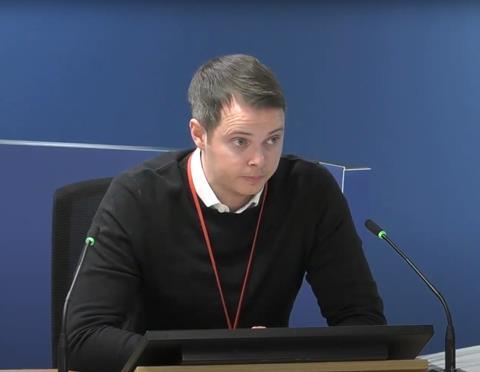 It came after Roper admitted last week how Celotex had rebranded its combustible FR5000 insulation, which had failed the fire test needed for use on buildings above 18m in February 2014, as a “new” product called RS5000.

Celotex then marketed RS5000 as safe for installation above 18m on the basis of what Roper repeatedly admitted was a “misleading” second fire test in May 2014 which used added components, rather than just the RS5000 by itself. The rebranded insulation was later installed on the 67m Grenfell Tower.

Roper, who at the time was working in his first job since finishing university and had no technical experience, was promoted from assistant product manager to product manager in September 2013 and given the job of “developing” the new product.

He described how the Celotex team had added a non-combustible magnesium oxide board to the RS5000 insulation for its second fire test to reduce the chance of it failing again.

Inquiry barrister Richard Millet QC asked Roper: “Did that not strike you at the time as dishonest?” Roper replied: “Yes, it did.”

When asked by Millett why he had gone along with it, Roper replied: “I went along with a lot of actions at Celotex that, looking back on reflection, were completely unethical and one that I probably potentially didn’t consider the impact of at the time.”

He added: “I was 22/23, first job, I thought this was standard practice although it did sit very uncomfortably with me.”

Roper told the inquiry he asked fire safety group consultant at the Building Research Establishment (BRE) Phil Clark to replace a photograph of the test rig in a draft test report with a different photograph, telling him “we want to show a close up of the condition of our insulation”. But Roper admitted the real reason for asking for the image to be replaced was because it contained evidence of the added magnesium oxide board.

He told the inquiry he “had to come up with a reason to ask for that photograph to be omitted”, adding that he was instructed to “create a false record” of the request by Celotex head of marketing Paul Evans.

The inquiry was later shown a slideshow created by Roper for a Celotex board meeting suggesting routes to market for RS5000 in which he wrote: “Nobody understands the test requirements.”

Millett asked Roper: “Was the basic point from this slide, that you wanted to get across to the [board meeting], was that the market was ignorant, their ignorance had been exploited by [rival firm] Kingspan and you wanted to do the same?”

Roper replied that although that was not his personal intention, it was the intention of Celotex, adding: “And that’s because it was worth £10m worth of revenues to Kingspan.”

The inquiry heard how Celotex had even concealed the true nature of RS5000 from its own sales team. Roper told Millett that the view among senior staff was that “it would confuse the message” if the sales team knew that RS5000 was in fact a rebranded version of FR5000.

Celotex has already admitted in its opening submission to the inquiry that there were “certain discrepancies” between RS5000’s successful BS8414 test, needed to certify it as safe for use on high rise buildings, in May 2014 as part of a cladding system and the description of that test in the BRE’s test and classification reports.

But it added that another test had been commissioned in April 2018 following the Grenfell fire which replicated “as closely as possible” the system described in the BRE test report and in Celotex’s marketing literature, and this test had passed.