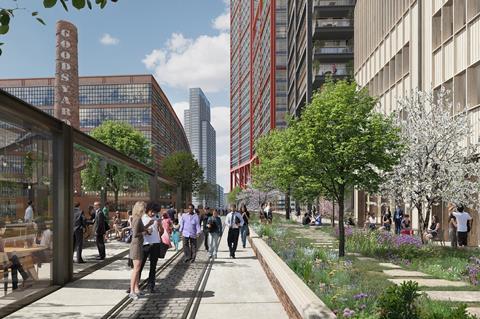 How the scheme could look

Greater London Authority planners have come down in favour of the huge redevelopment scheme proposed for Bishopsgate Goodsyard in east London.

The scheme, masterplanned by Faulkner Browns and featuring elements designed by Eric Parry, Buckley Grey Yeoman, Chris Dyson and Spacehub, has been recommended for approval by mayor of London Sadiq Khan in a report issued today.

A 155-page report prepared by GLA planning officers concludes that the mayor should approve the scheme which first went in for planning six years ago and has caused much local controversy. Its troubled planning history includes being called in by Boris Johnson in 2015 when he was mayor.

The developers, Ballymore and Hammerson, pulled that version of the scheme when GLA planners said they could not recommend it for mayoral approval.

It was taken back to the drawing board, Eric Parry replaced PLP whose residential towers were scrapped and the quantum of housing went up and down more than once.

The developers submitted their revised planning application for a mixed-use scheme on the 10-acre site on the Shoreditch fringe of the City of London in July 2019.

Khan is set to make his decision, based on today’s report, at a planning committee meeting on December 3. He is not bound by the recommendation.

As is now commmon, the housing and communities secretary Robert Jenrick has a “holding direction” on the scheme allowing him to overrule the mayor if he chooses. In practice he is unlikely to use that power unless the mayor rejects the scheme.

The GLA report says: ”The proposal represents a high-quality redevelopment scheme which would make a significant contribution towards the regeneration of the City Fringe/Tech City Opportunity Area. Temporary and, meanwhile uses aside, the site has been vacant since the mid 1960s. The principle of a commercially led, mixed use development is strongly supported by both strategic and local planning policy in the development plan. The proposed development would conform with the land use principles set out in the site allocations, including open space provision, and would provide much-needed housing.”

It praised the positioning of the all buildings and said: ”The design and layout principles are well-considered, creating new high quality routes and spaces. The massing and layout responds to the site’s constraints and sensitivities, including heritage assets. The proposal optimises the development density, taking into account the highly accessible location.”

The mayor became the planning authority in the case, which straddles two boroughs, at the developers’ request when they became frustrated by delays. Hackney and Tower Hamlets have both previously opposed the plans but earlier this month both authorities signalled they now support the project in principle, though the former raised concerns about the project on “design and historical grounds”

>> From 2019: New plans go in for Bishopsgate Goodsyard

>> From 2018: Time for fresh thinking at Bishopsgate Goodsyard

The original plans contained 1,400 homes while the new plans contain 500 homes of which half will be affordable – an increase on the 15% planned back in 2014.

The scheme will also provide 1.4 million sq ft of workspace in five buildings, including around 140,000 sq ft of affordable space. 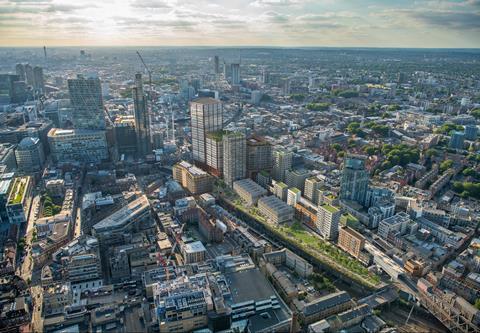