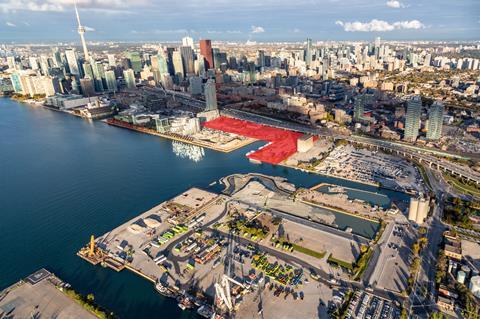 Three British practices have made it on to the shortlist for a huge quayside scheme in Toronto.

That smart city scheme – which was unpopular with locals – fell apparent victim to the pandemic, with Sidewalk announcing in May last year that it was scrapping the project because of global economic uncertainty.

A new contest for the site was launched in March by government-backed development company Toronto Waterfront. The request for qualifications (RFQ) received entries from 10 teams in May.

These have now been whittled down to four, with Fosters going head to head with a team comprising Adjaye Associates, Canadian-born Alison Brooks and Henning Larsen. 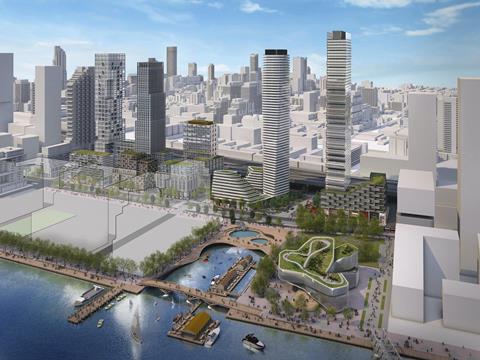 Artistic rendering of what Toronto’s fully developed Quayside could look like. (The massing is one possible vision and has not been approved and would be subject to a re-zoning process)

The finalists will now be invited to respond to a request for proposals (RFP), with a “preferred proponent” expected to be identified by the end of the year.

In a reference to the blow of Sidewalk Labs pulling out last year, a Waterfront Toronto spokesperson said: “The number and quality of submissions is a clear indication that Toronto’s waterfront remains a desirable development destination, and that Quayside can and will contribute to the province’s post-pandemic recovery.”

In March the body said it was after teams “with the proven experience, design portfolio, financial resources and shared vision necessary to bring Quayside to reality”.

Stephen Diamond, who chairs the Waterfront Toronto board, said: “We are looking for leaders in the development field that will share our ambition to create a place that fuses Quayside to the water, and provides more beauty, utility and originality than previously imagined. We want Quayside to be timeless, adaptive and to propel us into our rightful place among the great waterfronts of the world.” 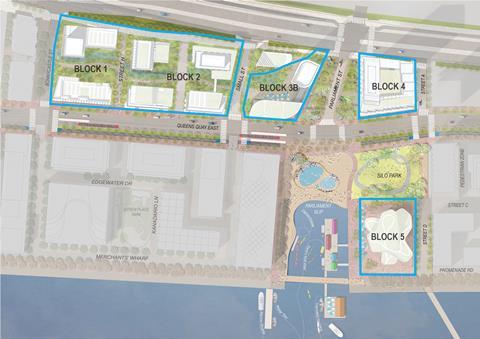 The site, one of the last undeveloped expanses of land close to central Toronto, includes 3.2ha of developable land across five development blocks.

It is part of a wider, and controversial, “revitalisation” of 800 hectares of land fringing Lake Ontario, the largest urban redevelopment project currently underway in North America and one of the largest waterfront redevelopments in the world.

Run by Toronto Waterfront, which was established in 2002, it plans to create 40,000 homes and a similar number of jobs over 25 years.