Former housing secretary Eric Pickles has complained about having to answer questions at the Grenfell Inquiry this morning because he had a “busy day” planned.

Pickles told counsel to the inquiry Richard Millett QC to “use your time wisely” because he had “changed my schedules to fit this [attending the inquiry] in”.

The outburst came amid a series of tense exchanges at today’s hearing of the inquiry during which Pickles was asked about the government’s policies of deregulation in the years leading up to the Grenfell Tower fire, which killed 72 people in June 2017.

Pickles, who also gave evidence to the inquiry yesterday, was only scheduled to appear at the inquiry during today’s morning session but the hearing has now overrun into the afternoon. 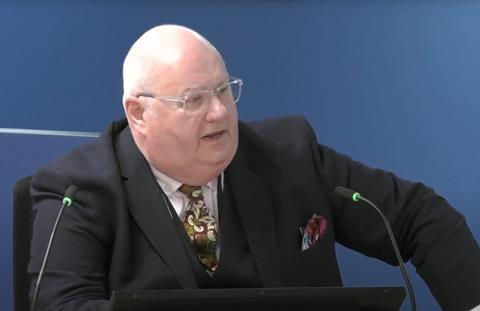 Following a series of questions about an internal email at the department, an increasingly irritated Pickles told Millett: “Could I respectfully remind you that you did promise that we would be away this morning and I have changed my schedules to fit this in, I do have an extremely busy day meeting people…but I would urge you to use your time wisely.”

A shaken Millett replied: “Right…may I please have an answer to my question” to which Pickles said that he had already answered the question to “the point of exhaustion”.

Before pausing for the morning break, Pickles, who stood down as an MP in 2017 and is now the UK’s special envoy for post-Holocaust issues, told inquiry chair Martin Moore Bick that he had “a number of international guests coming in to see me” and asked to be informed if the session would be extended into the afternoon so he could “start cancelling”.

Pickles later apologised for the comments.

Returning after the break, he said: “I’d like to apologise to you and particularly to Mr Millett for anywhere I seemed discourteous. As soon as I left the room I took the decision to cancel everything and this is more important than anything I’m doing.”

Moore-Bick responded by saying he was “sorry that we’re going to interfere with your programme for the afternoon”.

Pickles’ complaints were criticised on Twitter, with deputy London mayor for housing and residential development Tom Copley calling it a “jaw dropping display of arrogance and disdain”.

Copley added: “Only a thoroughly odious person would treat a public inquiry into the deaths of 72 people with such disrespect and contempt.”

Pickles was secretary of state at the Department of Communities and Local government between 2010 and 2015, a period in which cutting red tape was encouraged.

The hearing was shown an email from a press officer proposing ideas for media coverage for Pickles, including the headlines “Pickles introduces new red tape test for department” and “2 out, 1 in. Ministers increase efforts to cut bureaucracy”.

The email, sent by Jane Houghton, described how all future policy at the department would be subject to “bureaucracy busting” tests to keep new regulation “to a minimum”.

At yesterday’s hearing, Pickles described claims made by his officials that deregulatory policies at the department had restricted efforts to toughen up fire safety guidance as “ludicrous”.

But he also admitted that he had been in favour of cutting red tape, and that it was a “good thing” that officials were working in a policy environment where introducing new regulation was seen as a last resort.