The National Railway Museum and Malcolm Reading Consultants have launched a competition searching for architects to design the museum’s new central hall.

The museum, owned by the Science Museum Group, is part of York Central, one of the largest city centre brownfield regeneration projects in Europe. 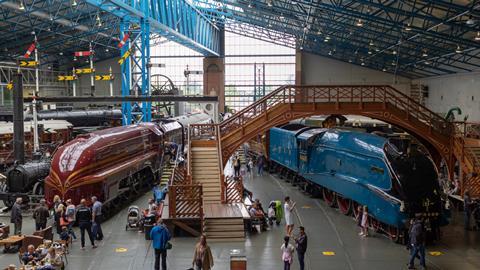 York Central will re-route a major road that currently bisects the museum’s site, separating two of its main galleries, the Great Hall (pictured) and Station Hall.

The new Central Hall, a 4,500sq m building with a £16.5m construction budget, will bridge the space between these two exhibition halls.

The new building will include reception spaces, as well as a 1,000sq m gallery intended to showcase future acquisitions and innovative technology.

Shortlisted teams will also be able to propose some enhancements to the adjoining museum buildings. This additional work will have to be deliverable within a £10m construction budget and will be contingent on the post-competition concept design.

The two-stage competition is open to both national and international integrated design teams that include architects and structural, civil and services engineers. The first stage deadline is October 16.

It comes less than two weeks after the museum launched a search for a lead designer to spearhead its new £5m Wonderlab gallery.

Both schemes are part of a £50m masterplan to transform the museum.

The masterplan, which was drawn up by a team led by Wilkinson Eyre, consists of six key areas including the Central Hall and Wonderlab projects and a £12m revamp of the museum’s Great Hall.

The museum plans to relaunch in 2025, exactly 50 years after it first opened.