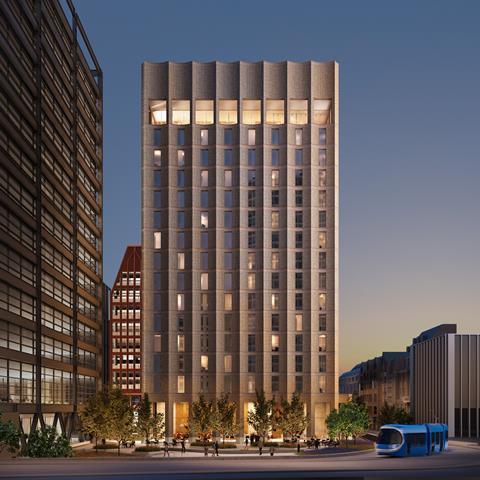 Plans for a 17-storey hotel at the £700m Paradise development have been given the green light by Birmingham City Council.

The project has been designed by ISA Architecture & Design and Paradise masterplanner Glenn Howells Architects.

The 152-bedroom scheme will be built on the corner of Paradise Street and Suffolk Street in the middle of the city.

The plans were lodged last autumn by developer MEPC, which took over the scheme from Argent last July.

Two other applications were lodged at the same time as part of the second phase of work – a 180,000sq ft commercial building, Three Chamberlain Square, designed by Feilden Clegg Bradley Studios and a series of new public squares and pedestrian routes through the development, designed by landscape architect Grant Associates.

Glenn Howells is also behind the Paradise scheme’s 155m tall Octagon building, which is has acquired its name because of its shape.

MEPC has since sold the tower to Singapore firm City Developments Limited which will now mastermind construction of the £110m scheme which is due to be completed by Midgard in 2025.