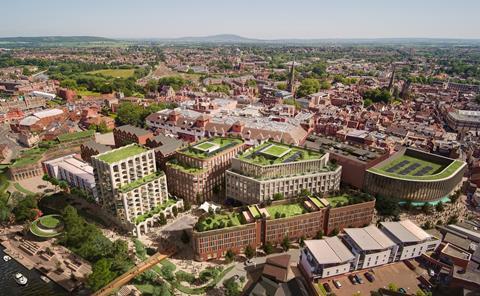 Glenn Howells Architects’ designs for the transformation of a swathe of Shrewsbury have been released ahead of a landmark meeting where Shropshire council leaders are being advised to push ahead with the project.

The authority said the scheme – which will deliver a new “multi-agency” civic centre, around 270 new homes, new commercial space, shops and transport infrastructure – would also reconnect the town centre with the River Severn and create a “stunning” riverside attraction.

Development of new council offices would also pave the way for the demolition of Shropshire council’s modernist 1960s Shirehall base, designed by county architect Ralph Crowe, although it is not on the development site. The building is subject to a certificate of immunity from listing valid until 2026.

Cabinet member for economic growth, regeneration and planning Ed Potter said the proposals had the potential to create 2,000 jobs and a “high-quality” transport hub with charging points for electric vehicles, and town-centre homes. 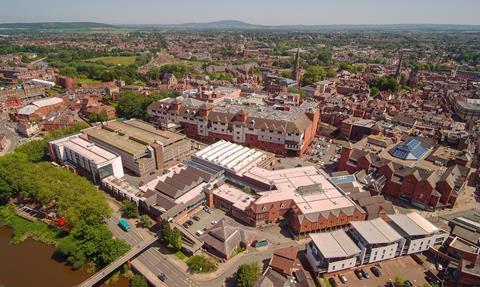 Overview of the riverside site as it currently stands

“This is a game-changing mixed-use development combining new leisure attractions, vibrant hospitality and public space, a new quayside and hotels to support the town’s existing retail, while bringing new workspace that can attract high-quality jobs into the town,” he said.

Potter said that in addition to zero-carbon offices the development would feature a vibrant mix of shops, restaurants and bars next to the new quayside fronting on to the Severn.

He added: “Shrewsbury is always associated with its very rich heritage and medieval old town, but now it can also become a town for the next generation of workplaces, modern living and a riverside destination that encouraging proactive travel and a healthy environment.” 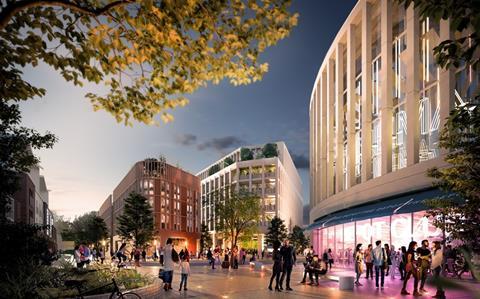 A report to tomorrow’s cabinet meeting said the job-creation figures were based on an economic-impact assessment that assumed 24,340 sq m of new office, leisure and retail space would be developed, alongside a 15,800 sq m replacement car park, two new hotels and the 270 new homes on the site.

It said a minimum of 150 homes would also be delivered on the site of the Shirehall.

The report said the council was already in discussions with potential public-sector partners who may be interested in moving into the multi-agency hub. According to the report, Shropshire council would take around 3,790 sq m of space at the building, leaving another 3,760 sq m for other occupiers, spread over three floors.

Cabinet members are being urged to recommend the council progresses with the first phase of the scheme, approving the development of proposals for the new multi-agency hub to RIBA Stage 3 and the demolition of the Riverside Shopping Centre and a former medical practice for the project.

Backing is also sought for the demolition of the Pride Hill shopping centre and Raven’s Meadow car park for the leisure-led redevelopment of the site. 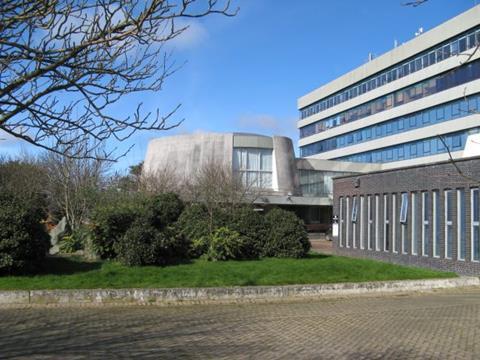 Source: Save Our Shirehall

The Shirehall in Shrewsbiury, designed by Ralph Crowe