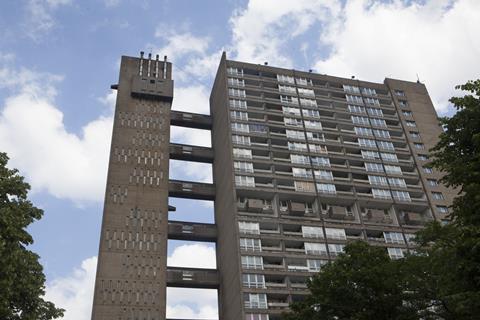 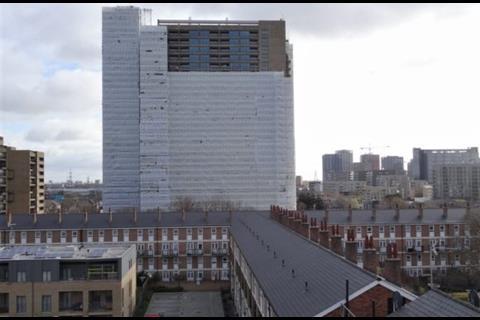 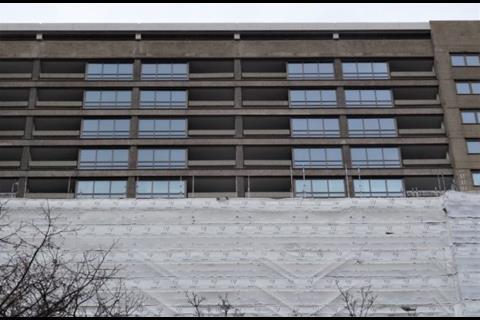 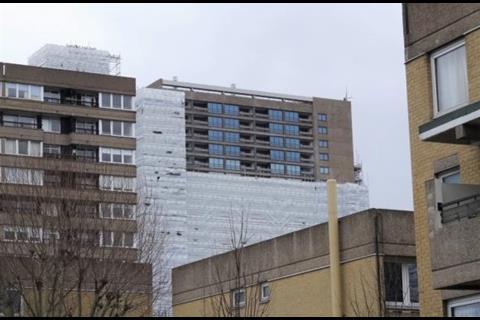 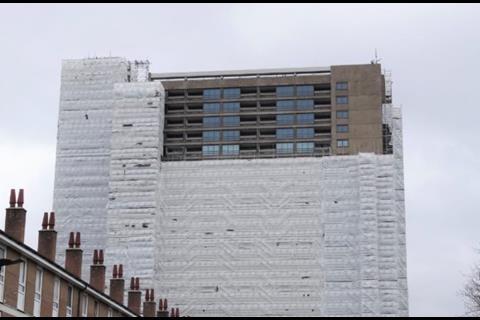 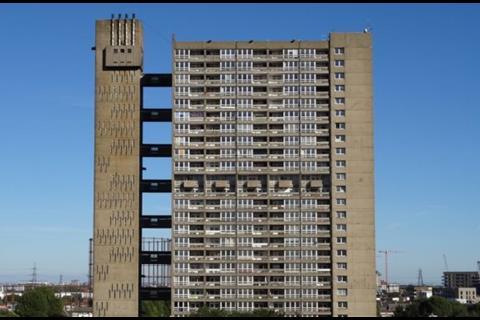 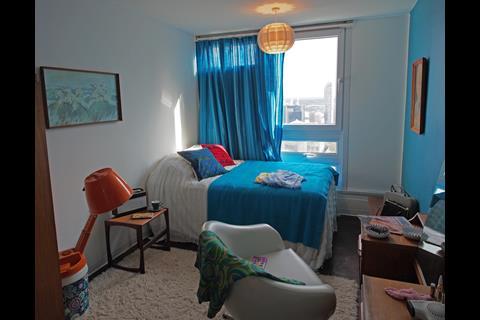 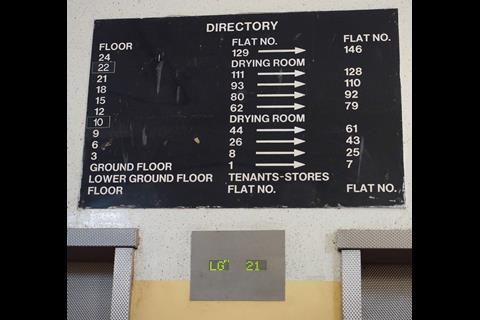 Screening was last week removed from the top few storeys of the brutalist landmark in east London, built between 1965-1967 as social housing and now being redeveloped by housing association Poplar Harca in conjunction with developer Londonewcastle and Telford Homes.

Project architect Studio Egret West won planning consent to strip and refurbish the 146-home block in 2015 as part of plans to convert the building into private luxury homes. The changes are in line with that approval, which had the support of government heritage advisor Historic England. 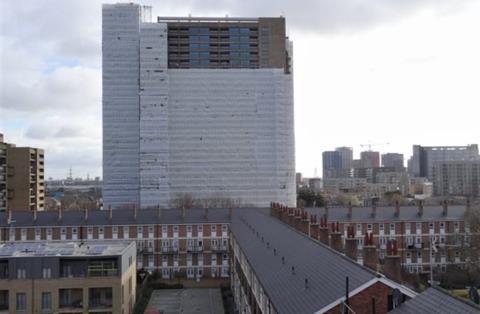 New fenestration at Balfron Tower, introduced as part of Studio Egret West’s refurbishment of the grade II* building, becoming visible as the scaffolding comes down

But the C20 Society said the anodised brown-metal finish of the new windows installed at Balfron Tower was “unprecedented in the building” and that the impact of the slimline metalwork and similarly finished new fascia panels “further emphasised the change”.

It said the fact that original “chunky” timber-framed windows on the tower’s east and south facades had previously been replaced by “unsympathetic” white uPVC windows should not have paved the way for similar mistakes.

Society director Catherine Croft said the decision to change the tenure of Balfron Tower from social housing to private flats had been controversial, and the resulting changes to the building’s appearance were “a tragic missed opportunity” to preserve the building properly. 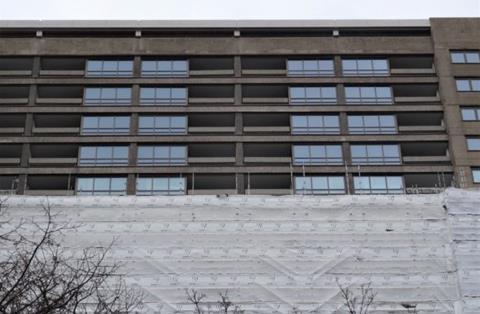 “Surely brutalism now has enough fans that a conserved Balfron could be successfully marketed as a unique opportunity to live in a genuinely iconic brutalist masterpiece,” she said. “Now all that’s left is an ersatz hybrid.”

Documents supporting the 2015 approval said changing the look of Balfron Tower’s windows would “enhance the appearance of the building, give it a refreshed appearance, and provide it with a sustainable life for many years into the future”.

Croft said it was a source of regret that prioritisation of current taste over conservation principles had resulted in a new look for the tower that was dramatically different from Goldfinger’s original design and that – in the society’s opinion – “looks awful”. 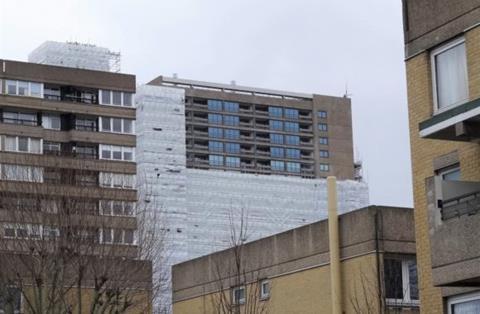 Historic England supported all of the changes proposed in the planning application, including window replacement, substantial alteration of the internal circulation and flat layouts, and replacement of the majority of surviving original internal fabric.

It said “much of the significance of the Balfron Tower” lay in “in its external character and landmark status expressed by its distinctive silhouette on east London’s skyline”. 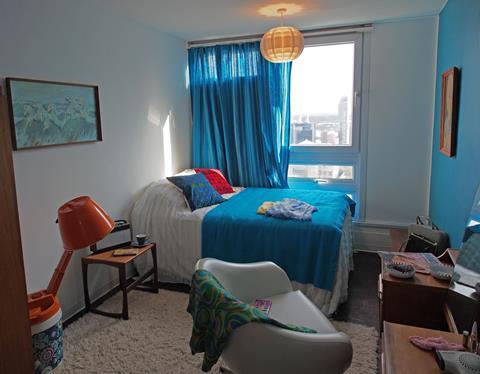 Goldfinger himself briefly lived in Balfron Tower in 1968. In 2014 the National Trust opened the flat to the public after it was furnished in period style by designers Wayne and Tilly Hemingway.

Studio Egret West founding director Christophe Egret said the practice was surprised by the C20 Society’s reaction to the removal of scaffolding from Balfron Tower.

He said that although the building shared many details with the architect’s later Trellick Tower in west London, Balfron’s proximity to the busy A12 and its differing orientation created a “very different” set of performance requirements that were best addressed with the use of aluminium framed windows.

“Details of the new windows were clearly set out in the proposals which were discussed with the 20th Century Society and approved by London Borough of Tower Hamlets, with the support of Historic England back in 2015,” he said. 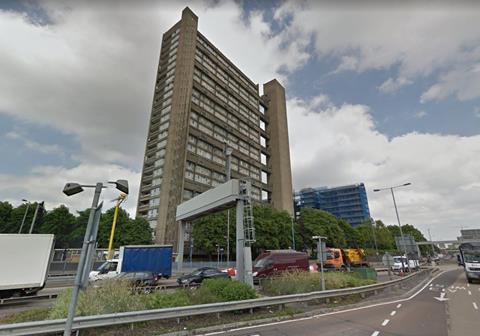 “Careful consideration was taken in the design and specification of the replacement window frames to find a solution which is respectful of the significance of the building while bringing the fabric of the building up to modern standards in terms of acoustic performance, thermal insulation and maintenance.

“Due to the proximity to the A12 the envelope of the building needs to have a very high acoustic performance to prevent the noise from the road impacting on the quality of life of the residents. This is particularly problematic in the bedrooms, the majority of which are located on the east elevation overlooking the road.”

Egret said the practice’s preferred design solution incorporated an acoustically ventilated panel into the fenestration system in all of the building’s bedrooms. “An acoustic attenuator will reduce the noise while still allowing natural ventilation of the bedroom,” he said.

“The perforated panel which sits in front of the vent will create a uniform appearance to the facade, conceal the vent and avoid the need for any unsightly vents on the façade.

“The decision to choose aluminium framed windows over timber windows has been informed by this demanding acoustic requirement. Achieving such a high level of acoustic reduction and integrating acoustically attenuated ventilation into a timber window frame would be extremely difficult.”

Egret added that bronze anodised aluminium frames had been selected because their darker appearance was much less susceptible to staining caused by pollution than white timber would be. He said the bronze finish also complemented the timber cladding on the neighbouring Goldfinger buildings of Carradale House and Glenkerry House.

He said the original metal frame windows in Balfron’s utility tower, link bridges, gallery and stairs had been replaced with Crittall windows to a similar profile, conserving and updating the original design.

This story was updated at 11:10am on 13 March 2019 to include a response from Studio Egret West