The Shard: pointers on reaching the top 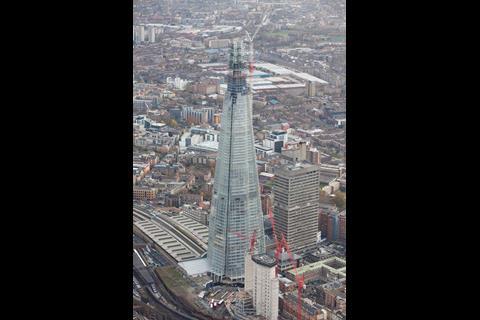 At 310m the Shard will be the tallest building in the EU when it completes later this year. 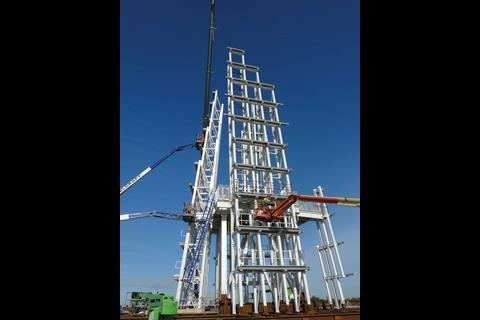 Vertical trusses create a 3D frame that will hold up the Shard's glass tips. 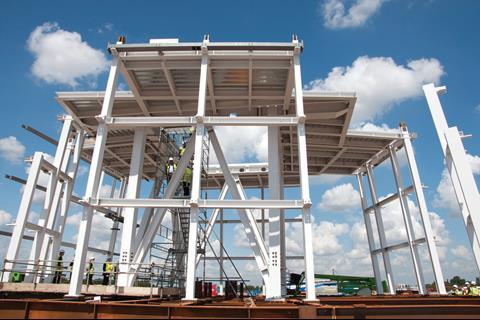 During the trial assembly, the Shard spire was erected in three sections at Severfield-Reeve’s Dalton plant.

Not many buildings can count clouds as a potential construction hazard. But at the Shard, Renzo Piano’s soaring 310m-high tower at London Bridge, the potential for clouds, fog and hostile weather conditions to disrupt construction led the design team to devise a complex off-site assembly process for the very top.

As a result, when the spire of the Shard was safely installed at the top of the tower at the end of last year, it was the second time it had been put together — the first was in a dry run by steelwork contractor Severfield-Reeve Structures (part of the Severfield-Rowen group) at its works in Yorkshire.

The spire, which comprises levels 69-95, contains the last inhabited floors — including the public viewing platform on the 72nd floor. This increased the need for a high-quality finish to the steel. The remaining levels, being installed from this month, are the very tips of the Shard, which cantilever above 87 up to 95. 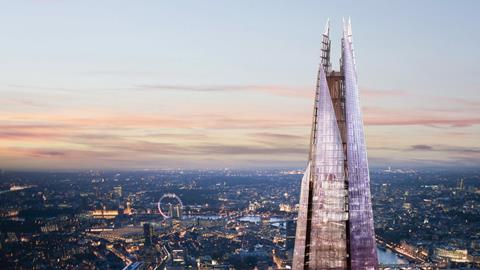 The Shard is a composite structure, with a steel structure through the office floors up to level 40 followed by a post-tensioned concrete frame through the apartment and hotel levels up to 69 topped by the steel-framed and steel-cored “spire”. In all, there are 12,500 tonnes of structural steelwork, 530 of which form the spire.

“It’s very important to Renzo Piano as a public space within the Shard,” says Mace senior project manager Adrian Thomson. “It’s a work of architecture rather than just a piece of steelwork.”

It was decided very early in the process to find an alternative to lifting the steelwork up individually, especially as there were a lot of relatively small pieces, some only 1.5m long. With winds of more than 100mph at that height, conventional construction would have raised safety, weather and time issues.

Instead, a modular system was devised to minimise both safety risks to contractors on site and weather-related delays, as well as ensuring that the quality met the aspirations of the client. The aim was to limit the number of pieces and connections that had to be lifted. This was done by modularising the steel main members horizontally and vertically, based on a 3m module in response to the 3m width of the trailers used to bring the steelwork to site. Flooring panels were fitted to the modules before installation.

The structure was also pre-assembled to enable the team to identify and eliminate any risks and difficulties. “It was a two-stage modularisation — one at the factory, one on site,” says Severfield-Rowen chief operating officer Peter Emerson.

“We developed a structure where as many pieces of steel as possible were put together as sub-assemblies determined by transport size. When they got to site, as much of these were bolted together as could be carried by the crane. This significantly reduced the number of lifts we had to make,” says Emerson.

Devising the modularisation was a complex task involving the whole design and construction team including Renzo Piano’s London representative, Giles Reid, who visited the test assembly in Yorkshire.

“There were several criteria that could potentially conflict — aesthetics, engineering, safety, predictability. We all collaborated on the evolution of the concept into a working model,” says Emerson.

The off-site assembly gave invaluable learning experience to Severfield-Rowen’s Steelcraft Erection Services, which also installed the spire in its final position on top of the Shard. The modules were assembled in three-storey slices then dismantled for adjustments and repainting. The process was then repeated for the next three levels. Some aesthetic changes were made as a result — for example, the attachments to the cladding were made less cumbersome and steps were taken to improve the quality of the welding in areas that were visually important.

“It has been a very active design debate. The architect was very keen that when the public were standing at level 72 they could see the seamless nature of the wing walls, which are a major part of the building’s expression,” says Thomson.

“Reaching the peak has enhanced the look of the Shard,” says Flan McNamara, project director of developer Sellar, adding that it’ll look even more elegant once the tips have been installed — “like it’s disappearing into the sky”.

The Shard will provide approximately 55,800sq m of hotel, luxury apartments and office space, and will be the tallest mixed-use building in Europe.

Supporting the shard from the ground up

The lower part of the Shard — ground to level 40 — consists mainly of public areas, retail and offices.

It has been constructed with structural steelwork around a vertical concrete spine and lift core. This was the biggest part of the steel package, involving 15,000 pieces weighing 12,000 tonnes.

To maximise floor-to-ceiling heights, fabricated I-beams spanning up to 15m were used to perform a dual function — as well as being structural, they allow the services to pass through. These are 500mm deep with standard holes for the servicing.

Each office floor includes three perimeter winter gardens where the steel frame is exposed and detailed as an architectural feature.
Steel framing is also used in the lower levels of the hotel from 37-40. Here, edge transfer beams carry loads from perimeter columns at 6m spacing in the offices to 3m spacing in the hotel as the building tapers.

At the very top, the columns are just 1.5m apart. 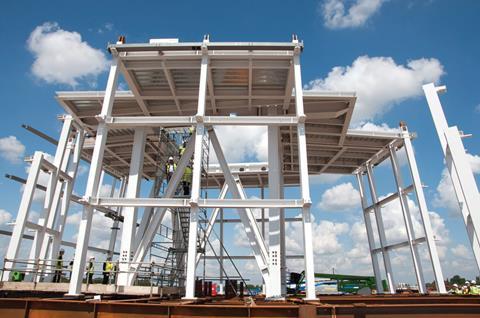 During the trial assembly, the Shard spire was erected in three sections at Severfield-Reeve’s Dalton plant.

The spire is constructed from 460 pieces of steel weighing 530 tonnes. It consists of a central core supporting the stairs and an outer structure that forms the main frame.

These were structured in a 1.5m grid framework forming 3m-wide panels spanning from the core out to the outer edge. Eight wing wall beams cantilever from the main Shard frame beyond the extent of the floor area. Apart from the box section columns, cladding rails and the wing wall beams that were fabricated sections, most of the rest of the steelwork was in standard sections.

The spire includes an enclosed, triple-height viewing gallery on level 69 and an external platform at 72 with a hardwood timber floor to suggest the deck of a ship. Plant and chillers are on 75. The lift extends up to 78 and the same standard of finishes continue to this level.

In the viewing levels, the architects were keen to reduce the amount of visible connections. “We’re very conscious that people will be looking up and out through the structure so we added refinement to the steelwork which the public will see,” says Giles Reid, London representative of Renzo Piano Building Workshop. “It was very important to us to push as hard as we could to get a high standard.”

Where bolted connections couldn’t be avoided, the architect worked with the steelwork contractor to dress the connections with cover plates. For example, on the connection between the vertical, horizontal and diagonal bracing Severfield-Reeve produced curved plates.
Other connections were dressed with filler after erection, and over-coating such as those on the wing walls, which have flush welds or hidden connections.

“They went to a lot of trouble to minimise the size of connections and make the welding neat,” says John Parker technical director of engineer WSP.

The spire has a steel stair supported by a steel core structure built in three-storey units. The stair extends from floor 67 to 87. It wraps around the central core and is tied to the structure at landings on every third floor.

First the stair tower was installed then the landings were hoisted into place. It was installed complete with aluminium treads, handrails and flooring to minimise the number of trades needed after the spire’s installation. The stair core structure alone weighs 100 tonnes and consists of 110 pieces.

The stair structure was pre-assembled in Sherburn near Scarborough by Severfield-Rowen’s subsidiary company Atlas Ward Structures — Light Steel Division. The spire main structure was trial erected in three sections at Severfield-Reeve’s Dalton plant in North Yorkshire.
“During [trial] assembly we made sure that we put every piece of steel, handrail and mesh into place so that we knew it would fit,” says Severfield-Reeve contracts manager Doug Willis.

The very last pieces of steelwork to be installed will be the cantilevered tips. Above level 87 the three highest tips — Shards 1, 6 and 14 — will be lifted, bolted into place and glazed. These are fabricated, vertical trusses joined together to create a 3D frame that holds the glass tip of the shard up. The largest one is a box truss 10.4m long, reaching up some 18.2m above level 87.

All spire steel is finished in a high-quality corrosion protection system of three layers topped by a glass flake product for added durability — a specification similar to that used for extreme conditions such as on the Forth Road Bridge.

Mace had built in an allowance for temporary works once the spire was installed on the Shard but this wasn’t needed — each piece was within 5mm of what was expected. “From my point of view the spire has taken the incorporation of safety planning, design, production and installation of steelwork to a new and advanced level,” says Mace’s Adrian Thomson. 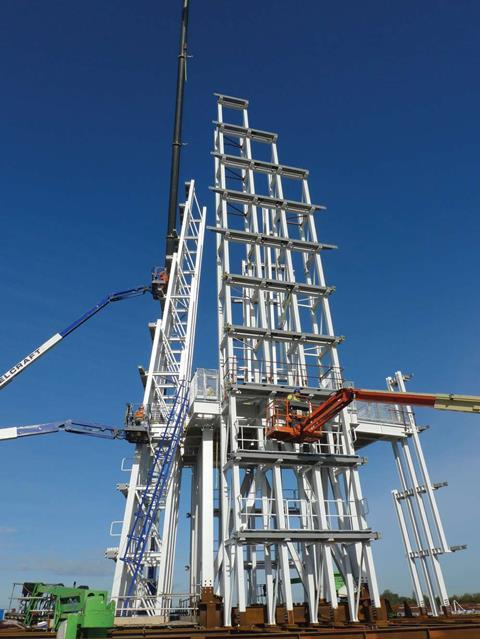 Vertical trusses create a 3D frame that will hold up the glass tips.