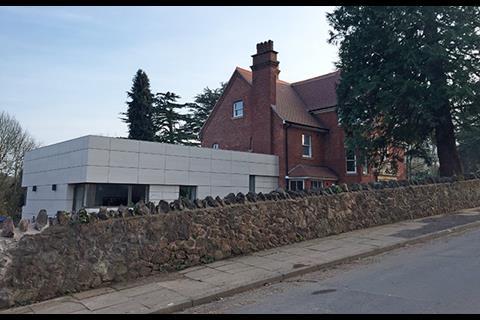 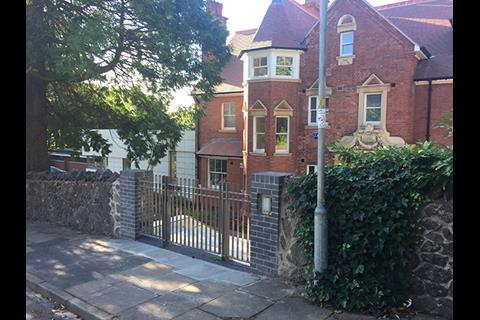 An unfortunate juxtaposition of old and new

There is nothing unusual in juxtaposing overtly modern and historic buildings but when it goes wrong the result can be the visual equivalent of nails being dragged over a blackboard. Take 8 Somers Road, a late Victorian villa that has been refurbished and enlarged with a procession of extensions including a stone clad box, a lower brick building and a garage with a pitched roof. The design and access statement accompanying the planning application describes these as ‘subservient and understated with a crisp modern aesthetic distinct from the historic house’.

A photograph of the house from the road shows the wall topped by a large hedge and the statement that the existing view along Somers Road ‘will remain largely unchanged, with only the single storey garage roofline being slightly visible above the hedge line’

Somewhere between planning and realisation the hedge has disappeared revealing a rectangular box with all the charm of a light industrial unit. This hasn’t been helped by the use of regular, rectangular engineered stone tiles in a stack bond arrangement.

The nominator Robert Smith describes the building as a ‘Lego brick’. He said, ‘8 Somers Road is situated in a lovely tree lined street dominated by Victorian architecture, in a conservation area. The house itself is believed to have been constructed during the late 1800’s principally of brick under a pitched tiled roof with part stone decorative facades.

‘Whilst the owners are in many ways to be congratulated in taking on such a large restoration project it is the extension of the property through the addition of why can only be described as a Lego brick that is so offensive to the eye.  To make matters worse, what cannot be seen from the photo is the fact that there was a Victorian single story building that was demolished to make way for the new monstrosity.

‘I am aware that planning guidelines today are to keep a clear boundary between new and old structures, but the architect has made no attempt to unify the house and now most people assume this family home to be a medical centre.’