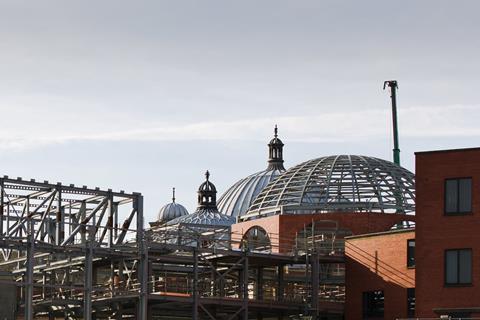 The steel dome and auditorium under construction, with the crescent's original domed buildings in the background. 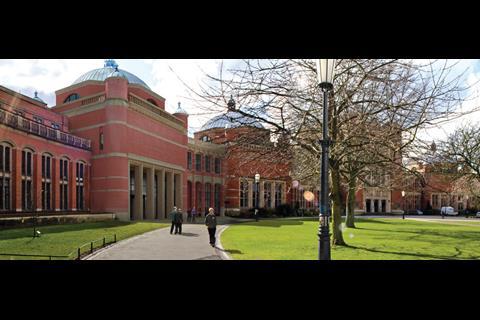 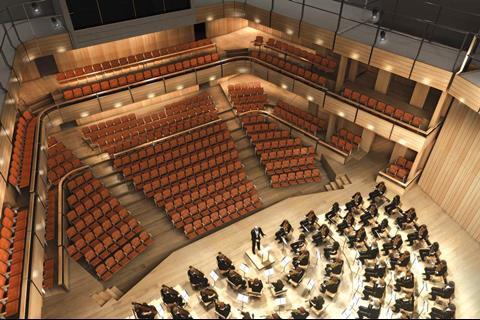 Rendering of the auditorium interior, which has been designed for a wide range of acoustic needs. 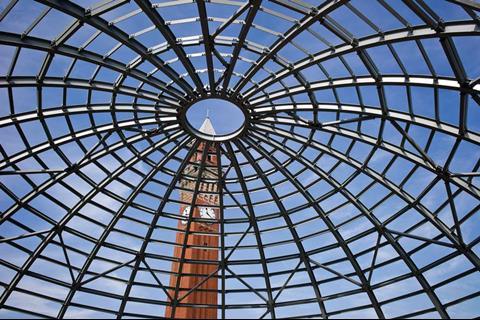 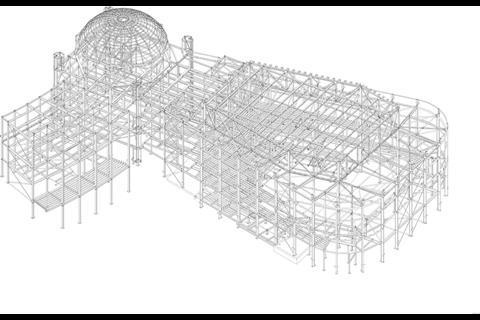 3D view of steelwork: A complex steel structure is concealed behind the traditional, brick-clad exterior of the new music department. The project involved 410 tonnes of steel. Illustration: Robinson Steel Structures 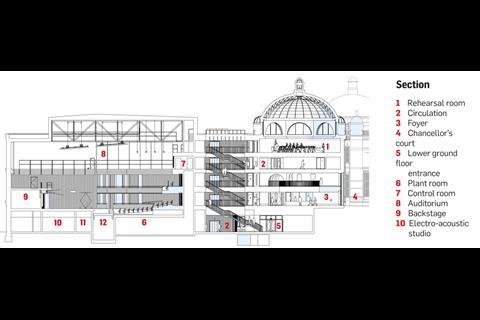 When designing a new music department for Birmingham University, Glenn Howells Architects faced the double challenge of creating a new brick-clad building that would live in harmony with its Edwardian neighbours, and introducing a complex steel-framed dome to the design.

At the start of the last century, Birmingham University embarked on the construction of a crescent of grand buildings designed by Edward Ingress Bell and Aston Webb — architect of the Admiralty Arch — and financed with the help of philanthropist Andrew Carnegie. Unfortunately, the money ran out before the final building was built. Now, more than 100 years later, the missing link in the redbrick crescent is under construction.

The Bramall Music Building, designed by Glenn Howells Architects, provides a home for the department of music, with a 450-seat auditorium, a domed rehearsal room and various studios, offices and teaching rooms. The challenge was how to fit in with the surrounding grade II* listed buildings, while meeting contemporary standards of accommodation and acoustics.

Rather than making a contemporary statement, Glenn Howells opted to continue the series of ceremonial pavilions and linking blocks without seeking to exactly replicate the neighbouring buildings. The new intervention has a carafe-shaped plan, in contrast with the T-shaped plans of the others, to better accommodate the auditorium at the rear. “We had to exercise a bit of humility to try to sensitively interpret what’s there,” says project architect Will Schofield.

The building is steel framed to create the open plan area for the auditorium and the music rehearsal room’s domed roof. Externally, it is clad in brick to complement the rest of the crescent. Masonry was initially considered for the dome, to replicate the neighbouring dome in the crescent, but this was discounted as it would be too heavy while timber was considered uneconomical.

At the front of the building is a double-height entrance foyer, made possible by 15m-long, 3.2m-deep Vierendeel trusses, which incorporate the second floor within their depth. This space is overlooked by a circular balcony. Above is storage at second-floor level and at third is the 15sq m double-height rehearsal room with the domed roof, which is capable of accommodating orchestras. The geometry of this space was complex.

“The challenge was to understand how you get from a square to an octagon to a dome and reconcile all that. We learned from looking at the other buildings,” says Schofield.
Another issue was how to avoid sound colliding in one spot within the rehearsal space, which entailed breaking up the surface of the underside of the dome with timber louvres suspended from the steel structure, which act as quadratic residue diffusers. The exterior is being covered with rolled leadwork.

The auditorium has a reverse fan-shape and has to be flexible enough to cope with anything from unamplified lutes to fully amplified orchestras and electro-acoustic performances.

The Bramall Music Building is due to complete on schedule in March 2012. The £13 million project involved a total of 410 tonnes of steel. 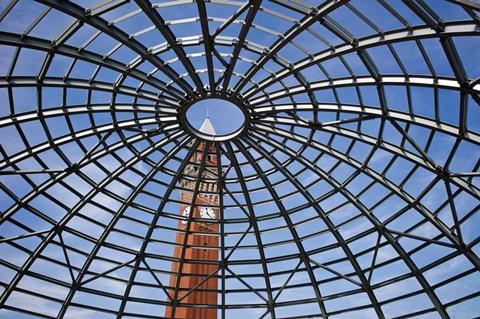 The 15m-diameter dome is divided into 24 segments, supported on eight steel columns. These are inter-spersed with eight arched windows that were brought to the site as precast units. In total, the dome contains more than 500 individual steel elements.

The construction of the dome was the most complex part of the project, according to project manager Scott Marsh of contractor BAM. First BAM considered installing the external leadwork and internal timber cladding at ground level and then lifting it up into place in either four or six segments. But this would have been too heavy to support.

Instead, Robinson, the steelwork contractor, built a 10-tonne temporary steel tower to support the ribs of the dome as they were installed. Half of these were pre-assembled — each segment consists of two curved radial members linked by bracing. These were installed in an alternating sequence, with the remaining, interspersing segments assembled in situ to complete the dome’s ribs.

The ribs were then tied together with a compression ring at the apex. Only when the very last piece of steelwork had been bolted and tightened could the support tower be removed.
Robinson had never seen such a complex structure in terms of geometry and setting out lines.

“It was a very challenging job all round,” says Robinson’s contracts manager Richard Fry. “It wasn’t just the complexity of the dome’s construction, but the restricted access and the tight programme as well, which meant we had to have just-in-time delivery. We pre-assembled parts of the dome to give us more time on site to get the steelwork up.”

Steelwork is now complete and work is progressing on the complex timber-louvred ceiling.

The roof steelwork is a series of eight 4.2m-deep trusses that span the auditorium. Within their span is a maintenance level of a single-spanning tension wire grid that can be walked on. The trusses also support the 300mm-thick concrete roof.

The trusses are picked up by four beams around the perimeter of the auditorium, supported on six columns.

Balcony seating at first and second-floor level and a control room are cantilevered off 500mm-deep beams in the main steel structure, supported by one internal column at the rear of the auditorium. Two more columns support the wings.

Two steel seating towers at either side of the stage can be moved to different positions on frictionless stainless-steel castors.

The construction team had to contend with limited site access after the partial collapse of a nearby bridge, which meant that the eight main trusses had to be made in two parts and then spliced together on site. Four massive trusses beneath the dome at second to third floor level also had to be spliced on the ground and then lifted into place.

Another difficulty was installing precast four-storey concrete walls that had to be threaded through the steelwork structure and the temporary supports and manoeuvred into place.