Four architects are among the winners of the National Trust’s competition to reimagine the view over London from the south.

Studio Octopi, Carl Turner, Design Haus Liberty and Collective Works will see their images used in an installation in the gardens of the Horniman Museum called The Imminent Diorama.

The winning visions will be printed on acetate and slotted between a viewfinder and a framed distant view over central London by “experience designers” Bompas & Parr.

Open from November 13 to 26, The Imminent Diorama aims to celebrate the delight and importance of vistas as well as highlighting the disparity between protected views in north and south London.

The competition brief asked architects and artists to design their vision of what that view could look like over the next 80 years. 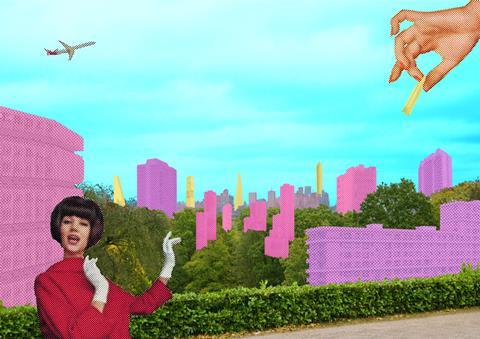 It’s 2098 – London has finally built itself out of the housing crisis; the centre has densified, outer boroughs have built up and key workers once again enjoy the city in which they live. London is a joyous city of sprawling leisure parks and integrated live-work spaces and now looks to the future. Planning policy focuses on enriching the lives of all of its citizens and celebrating modern achievements. Instead of protecting views of the icons of yesteryear this new London frames views to the Shard, the new debating tower at Westminster, the 2050 Tower of Culture and the world’s tallest co-living building. 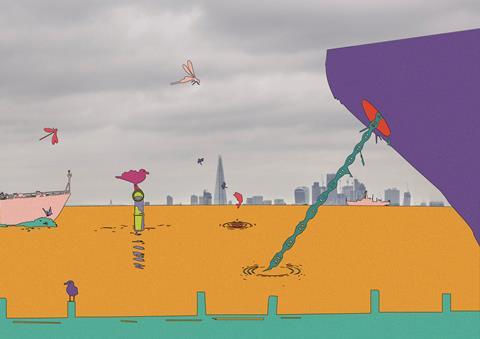 London 2097. It is a wonderful day in the English Archipelago – through the clean air one can easily see the ships passing through the sunk City of London and if we look carefully, we can even spot the tip of St Paul’s above the waves. It is a proud day for the Horniman Museum, awaiting the opening of its new open-water enclosure complementing its famous Aquarium. Who would have guessed things would turn out so well: Having fought long and hard to preserve its visual connection to London against encroaching high rises and housing estates, the sudden rise in sea levels offered a most welcome solution. Not only did the Horniman Museum gain an unobstructed view to the remaining Islands of London, its prominent position on the new shoreline has earned it the Royal Pier, and the first regular submarine connection to Notting Hill. 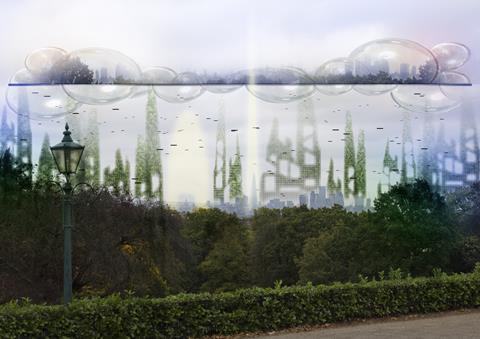 We’re running out of space in London. Therefore we must look to grow above and below ground. Through strategic location of skyscrapers and underground scrapers, traffic will be relocated to tunnels below the city and new opportunities for urban parks will arise. The present skyline cluster which is currently planned around converging lines and corridors that protect views of St Paul’s Cathedral, the Tower of London and the Monument, will be spread to leave vertical pockets within the new city. These vertical pockets will emphasize the protected views even more, taking them into a third dimension, acting as a spotlight on the monuments. 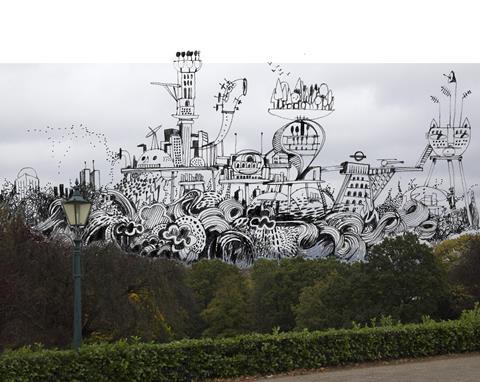 London in 80 years is choked by pollution, a thick black smog engulfs everything. Only the super-rich can afford to live on the platforms that sit high above the city. There is everything there from apartments and leisure centres to nature reserves. The nature reserve has a wooded plantation upon it to draw in fresh oxygen. There is a London Over Overground station for access from the Below for workers to serve the super-rich. Architects have free rein to design and build anything they desire as there is no history visible; the skyline is a free-for-all. 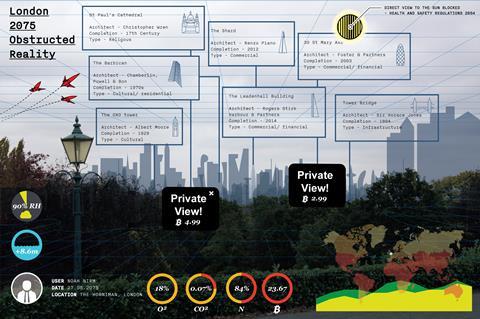 The views of St Paul’s were only given policy status in 1980 – well before the digital revolution. With this in mind we want to turn the assumption of them being blocked by actual physical buildings on its head. In addition to the unrelenting development we are also faced with giant tech companies and the ownership of data, not dissimilar to “public” spaces evaporating silently into the hands of corporations. Ultimately the threat we believe these views are facing is two-fold. Are these views public or private? Playing with the notion of “protected” our idea is rooted in the concept of censorship via augmented reality which is partly dystopian, partly utopian. If it is perceived as an asset, it could be used to generate revenue thus creating a model where the views must be paid for. Even if everyone could afford the view - like a £0.99 app - is it really public? 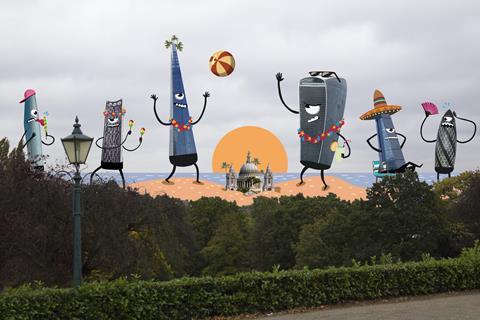 As towers keep shooting up in London, panoramic views are becoming increasingly rare and valuable for the local community. This illustration, called Global Warming 2097, plays around with architecture to satirise a dystopian future in which rising sea levels and temperatures will have turned London into a tropical beach resort. Only those living in private high-rise developments will have the exclusive enjoyment of something as basic as a sunset, to the detriment of the communities living further out of the city centre. Symbolised by St Paul’s Cathedral, the centrepiece of London’s protected views, this illustration aims at highlighting the importance of an experience that is publicly enjoyed from buildings that are opened to everyone. 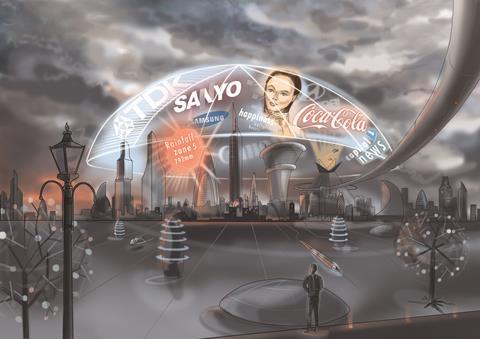 It’s 2097 and dystopian London is under increasing threat from violent electrical storms and excessive rainfall. Consequently, a giant immersive umbrella has been developed not only to protect the hub of our vibrant capital but also to feed its thirst for consumerism. 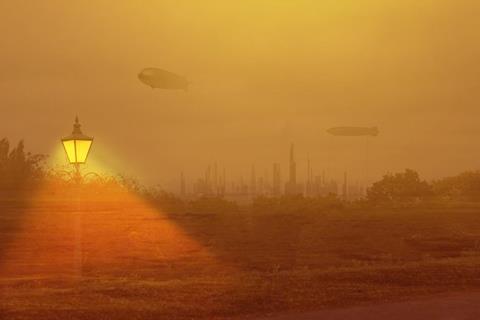 This vision imagines a future where climate change has caused a drastic increase in hurricane activity, the world’s equator has become more extreme and the subsequent storms cause a large volume of sand to be ejected into the atmosphere basking London in an orange hue. All the while London’s skyline pushes upwards as the city becomes ever more densely populated. St Paul’s is now the only historic building still visible from the Horniman’s gardens.