Theresa May tells housebuilders to shape up 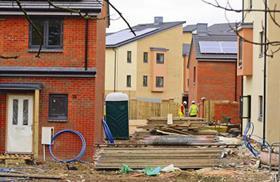 The prime minister has outlined a series of planning reforms to speed up the delivery of new homes across the UK and sent a warning to housebuilders “to do their duty” to help solve the country’s housing shortage.

In a speech at a National Planning conference in London today, Theresa May announced a major overhaul of the UK’s planning rules to give local authorities and developers “the backing they need to get more homes built more quickly”.

The new rules will see the implementation of around 80 of the proposals set out in the 2017 Housing White Paper, including using land more efficiently, fast-tracking planning permissions into homes, giving greater certainty to local authorities and putting local plans in place to give communities more control.

The prime minister warned builders and developers that they had “to step up and do their bit.”

May said she wanted to see planning permissions going to people who were going to build houses, “not just sit on land and watch its value rise”.

She added: “Where councils are allocating sufficient land for the homes people need, our new planning rulebook will stop developers building on large sites that aren’t allocated in the plan – something that’s not fair on residents who agree to a plan only to see it ignored.

“I expect developers to do their duty to Britain and build the homes our country needs”.

A major overhaul to the National Planning Policy Framework, the first since 2012, will provide what the government called “a comprehensive approach for planners, developers and councils”.

The plans will be consulted on over the next eight weeks – with a final version expected to be published in the summer.

And mindful of the recent outcry over Persimmon boss Jeff Fairburn’s bonus – which was cut from £100m to £95m last month – May also took a swipe at executives who reaped huge bonuses.

“The bonuses paid to the heads of some of our biggest developers are based not on the number of homes they build but on their profits or share price,” she said.

Colin Lewis, chief executive of Avant Homes, said: “The prime minister is today asking housebuilders to ‘do their duty’. But volume housebuilders needed to change the way they operated.

“Currently, housebuilders’ sales are supported by the Help to Buy subsidy, irrespective of how many homes they build. The funds are not linked to increased volumes, nor to any quota of attainable properties.

“Let’s link the availability of Help to Buy funds for housebuilders to an increase in the numbers of new homes they build. If a housebuilder does not increase output by a given percentage in one year, reduce the access it has to Help to Buy subsidies the following year.”

In January, the former head of the civil service and a past chief executive of the Homes and Communities Agency, Bob Kerslake, said the Help to Buy initiative needed reform while former construction minister Nick Raynsford, who stepped down as an MP in 2015 and is now chair of housing association Heylo, said it needed phasing out.

Last October, May announced a further £10bn towards Help to Buy, ensuring its continuation until 2021.