Work to rewrap the burnt shell of Grenfell Tower recommenced this week.

The work was paused by the Ministry of Housing (MHCLG) in late March because of social distancing concerns for workers on site and on public transport at the start of the pandemic. 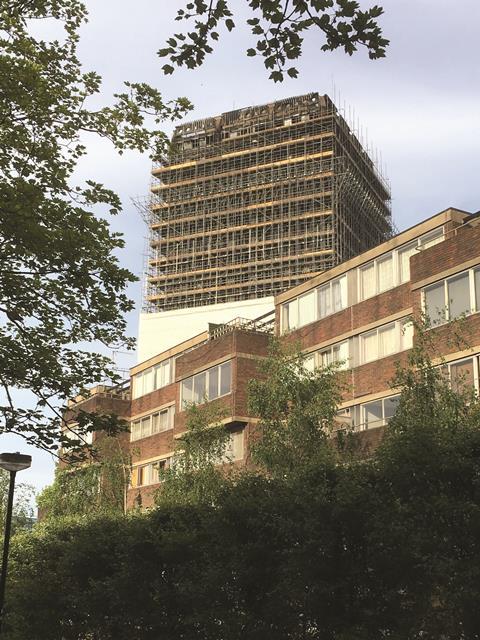 Work underway to wrap the tower first time round

It was originally due to complete in April but is now expected to be completed by the middle of July.

The project has seen the remains of the 24-storey tower rewrapped in protective material from the top down, replacing a covering that was installed soon after the fire in 2017 which claimed the lives of 72 people.

MHCLG allowed work to resume after being satisfied that social distancing by the contractors was possible.

Meanwhile environmental assessments that were set to be carried out by Aecom of the ground around Grenfell Tower remain on hold.

Ministers agreed to pause parts of this work to ensure residents could be engaged with the testing process.

“Safety was the main consideration in coming to this decision,” said the government in a Grenfell community update issued yesterday. “Progress can and is still being made on stage 2, including plans for a virtual community event, which we expect to take place in late June. At the event you will be able to ask the scientists any questions you have about the environmental checks.”

This second, more detailed, stage of environmental testing will investigate possible land contamination caused by the deadly blaze in June 2017 and whether this poses a risk to public health.

The first stage of tests found that levels of chemicals in the soil were consistent with those generally found in London. Air quality monitoring in place since June 2017 has also not identified any cause for concern.