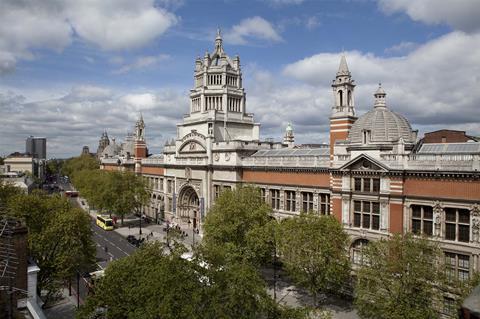 The V&A has revealed details of its future architecture programme following its split from RIBA and promised that its commitment to the sector “remains the same”.

Tropical and South Asian architecture are among themes which the museum wants to explore in upcoming exhibitions, the museum’s keeper of art, architecture, photography and design Christopher Turner told Building Design.

Social housing will also be put into the spotlight as the museum seeks to bring attention to a broader range of architectural subjects, Turner said.

It follows the announcement that the V&A’s 20-year partnership with RIBA will come to an end in 2027.

The joint initiative, launched in 1999, saw the opening of a permanent exhibition in 2004 displaying pieces from RIBA’s collection including drawings and models.

But the pair are now set to part ways, explaining in a joint statement last week that the “strategic priorities of both institutions have shifted”.

Turner said the move was an “amicable separation”, adding that the museum’s “commitment to architecture remains the same”.

He also said the RIBA exhibition will stay open with the five remaining years of the partnership giving the V&A time to do preparatory work on refreshing the gallery.

“Under Simon Allford the RIBA is focused on the house of architecture at Portland Place and we are reinventing our architecture programme,” he added.

> Also read: What’s going on at the RIBA?

Turner is heading up a team of architecture and design curators who are working with architectural collections across the museum’s sites at V&A South Kensington, V&A East Storehouse and V&A East Museum.

Outlining the future direction of the V&A’s architecture displays, Turner said the museum will look more at culture.

“We have a very international outlook, and we are focusing a lot more on diversity and women,” he said, highlighting the V&A’s contribution to the 2021 Venice Biennale, “Three British Mosques”, as an example of the museum’s new direction.

The installation explored ways in which diverse immigrant communities had put their own spin on traditional vernacular mosque architecture and in turn reinvented the mosque for a British context.

A further example is this week’s opening at the V&A of “The Lebanese House” by the French-Lebanese architect, Annabel Karim Kassar, which explores themes around architectural conservation, identity and loss following the huge blast that devastated much of central Beirut in August 2020.

Turner said the museum’s 2017 acquisition of a portion of the brutalist Robin Hood Gardens estate, in Poplar, East London, will also play an important role in the future architecture programme.

The 1972 building, designed by Alison and Peter Smithson, has been mostly demolished, but the V&A owns a three-storey section which is intended to serve as an example of the brutalist movement. The salvaged section is 8.8m high, 5.5m wide, 8m deep and includes interiors as well as the front and back facades and part of the building’s “street in the sky”.

Despite a campaign to prevent demolition initiated by the Twentieth Century Society, Building Design and supported by architects from across the world including Richard Rogers and Zaha Hadid, a listing application for the building in 2015 was rejected.

Four new departments were set up this year following a restructure prompted by savings which needed to be made across the V&A due to the covid-19 pandemic: